With so many perfect interiors in Blogworld it’s easy to think that everyone who shares their home on the internet lives a perfect life full of lunches as trendy cafes, unlimited decorating budgets and projects that never go wrong.

Now, I’m not saying that we never go out (I snapped the picture below at a recent visit to the very cool House Of Small Wonder), as clearly evident by our lack of home progress, but we are real people with an annoyingly real life budget. Progress for us is slower than I would like but more importantly, things around here don’t always run as smoothly as it may seem! 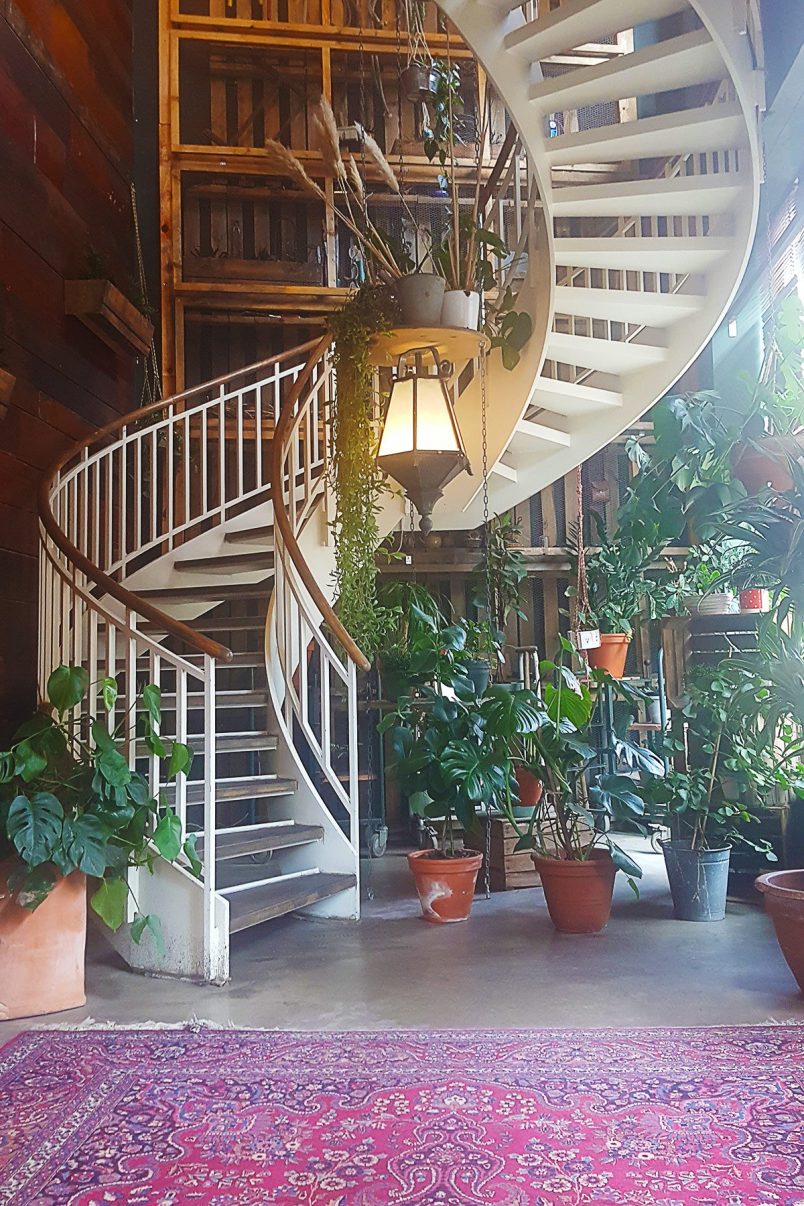 Overall, we’ve been lucky and haven’t had any major disasters but that really doesn’t mean that things always turn out the way we expected either!

In order to keep things real around here, we thought it was about time to share a few project fails that didn’t work out quite as we’d planned and didn’t even make it onto the blog!

1. Raised Bed in the Garden

I shared part of this project when I first started to build the raised bed but never shared the finished result. 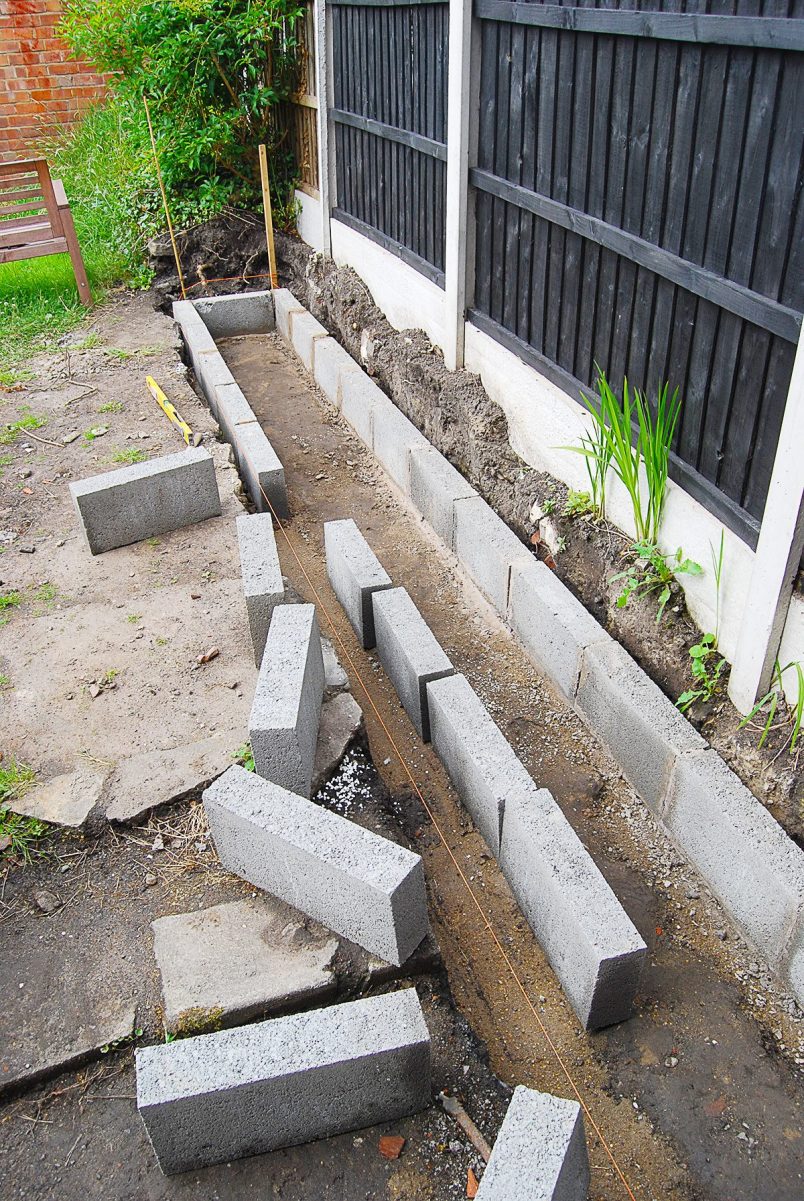 Well, that’s because it turns out I’m the worst bricklayer in history! It’s definitely much more difficult than it looks which is why we decided to pay to have our other garden wall rebuilt!
I have to admit that I’d not expected it to be easy and really only attempted to build the wall because we’d always planned on rendering it and in my mind, any imperfections would be covered by the clean plaster. 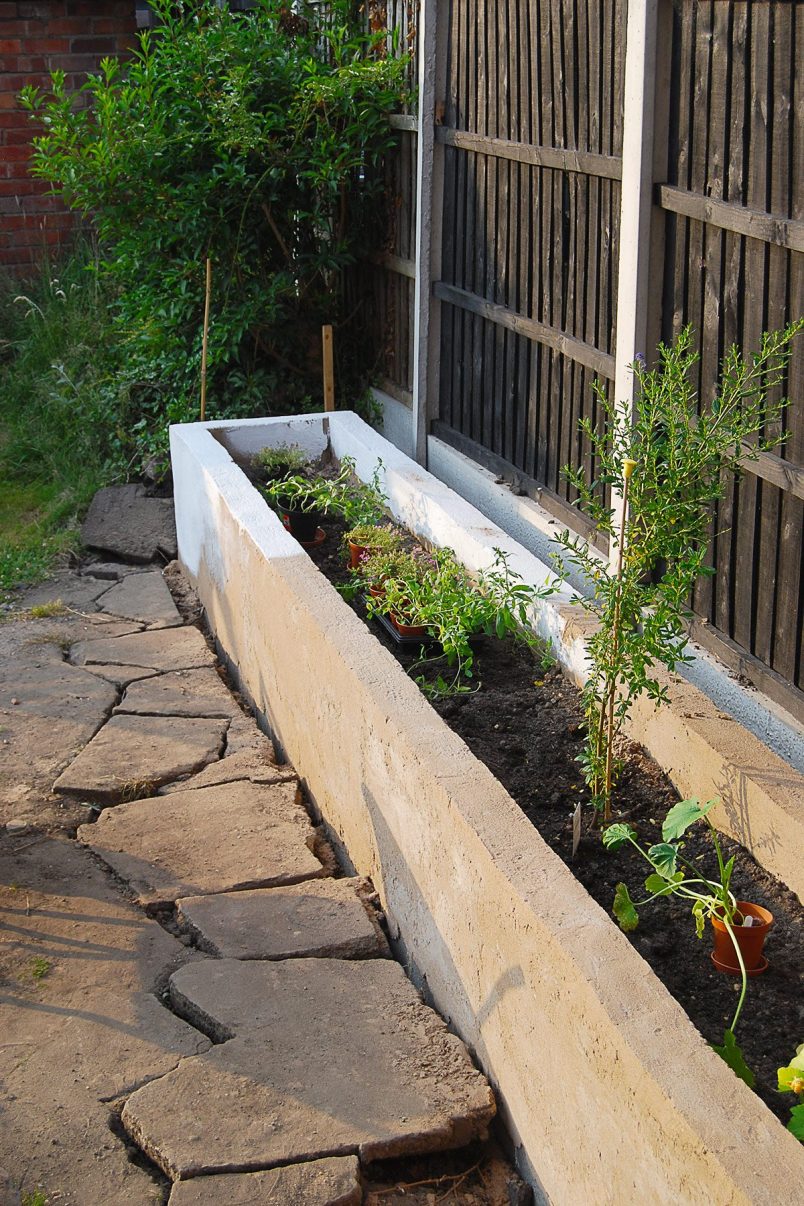 Well, it turns out that plastering is more difficult than it looks, too! Since first attempting this project I have taken part in a plastering course which was a game changer and allowed me to plaster our small bedroom but I definitely made a complete mess of the garden wall!

This is a project we never ever even mentioned on the blog.

I took out bed to pieces, dragged it into the garden, assembled it again because I figured it would be easier to paint, spent a small fortune of cans of spray paint and ended up covering more of the garden in paint than the bed! 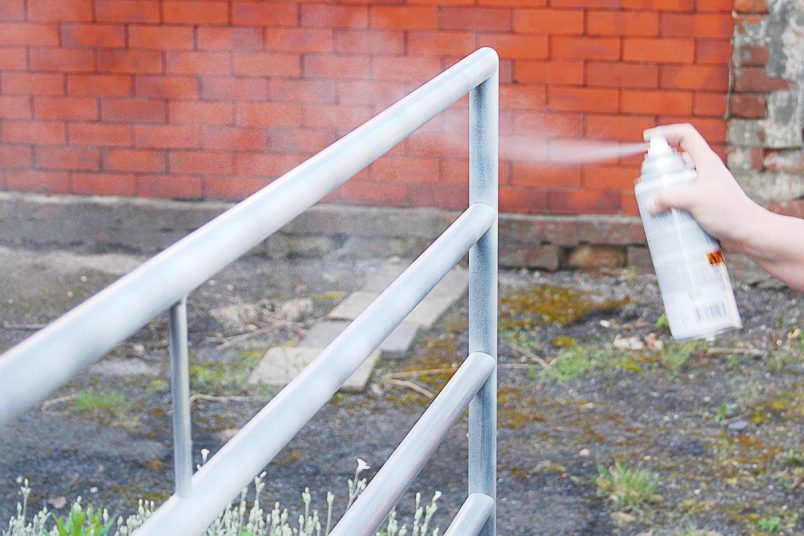 Spray painting outside does work but only if there’s absolutely no wind. Oh, and no insects would be a bonus as they have a tendency to land on your perfectly painted but obviously still wet surface. 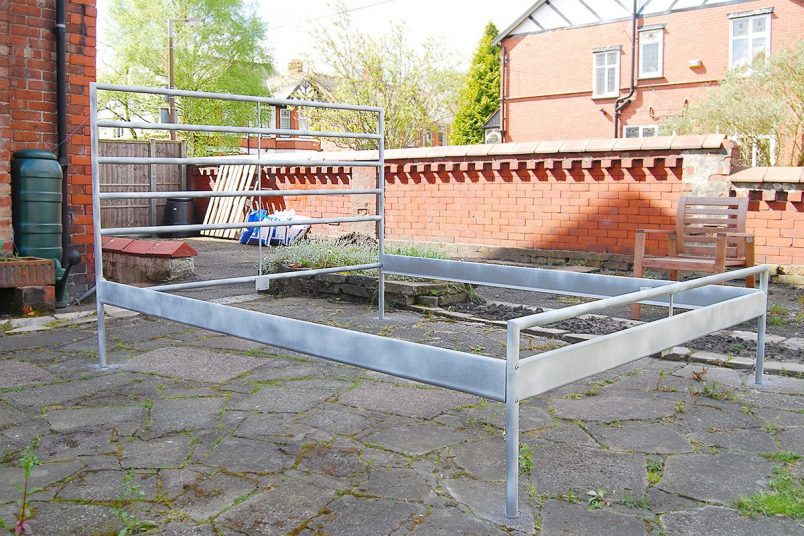 The bed looks even worse for wear now that it’s been dragged halfway across Europe to our new home. It’s still a great bed (it’s from Ikea but they no longer sell it) and we have a fun update planned for it as part of our guest bedroom makeover. I already can’t wait to get out my angle grinder. Now that’s a sentence you don’t hear me say too often!

Strictly speaking, this wasn’t a DIY and it wasn’t really our fault. We can laugh about most things that went wrong over the years but I still don’t like to think about this project.
The joiner who built the cupboards was a complete nightmare. Not only did he do a poor job, he also overcharged us, didn’t finish the work and left the house and front garden a complete mess. 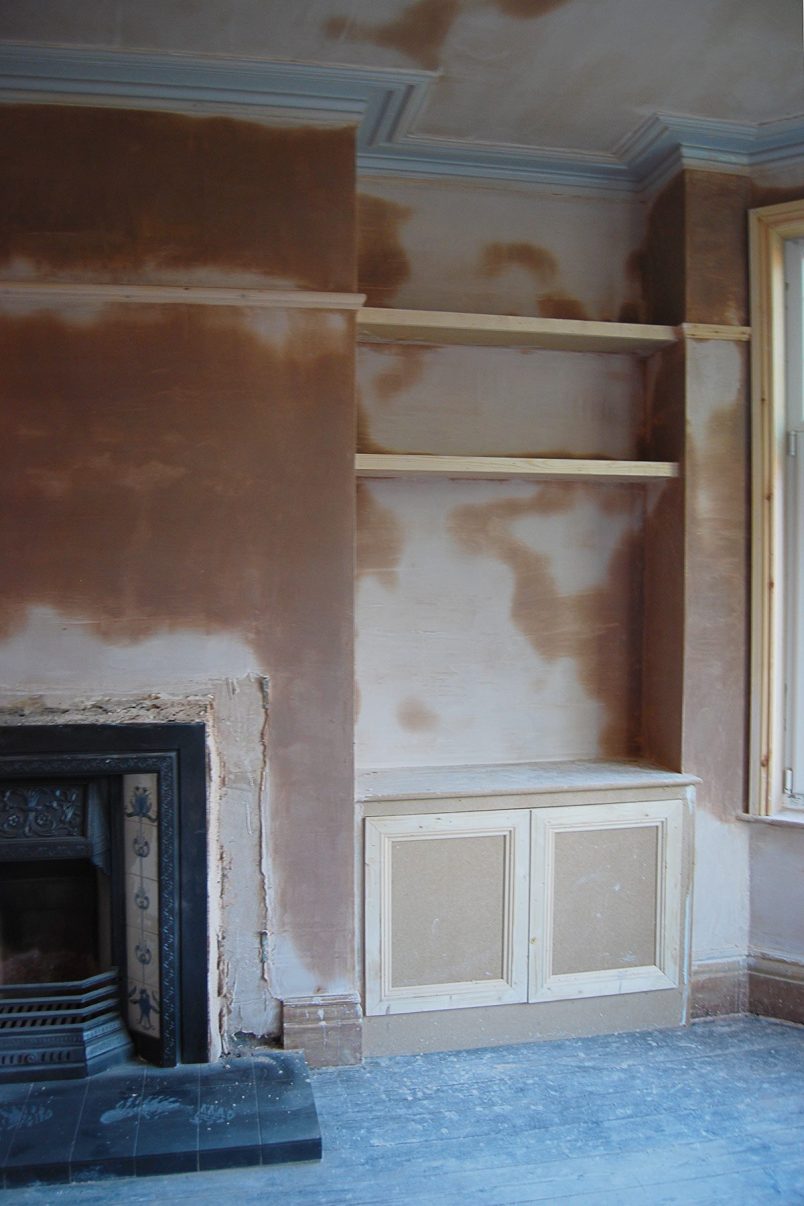 Within minutes of him leaving the house, I actually started to take the cupboard apart again!
The whole process was definitely an eye opener and is probably one of the reasons that we started to DIY in the first place. To this day, I’m convinced that we would have done a much better job if we’d built the cupboards! 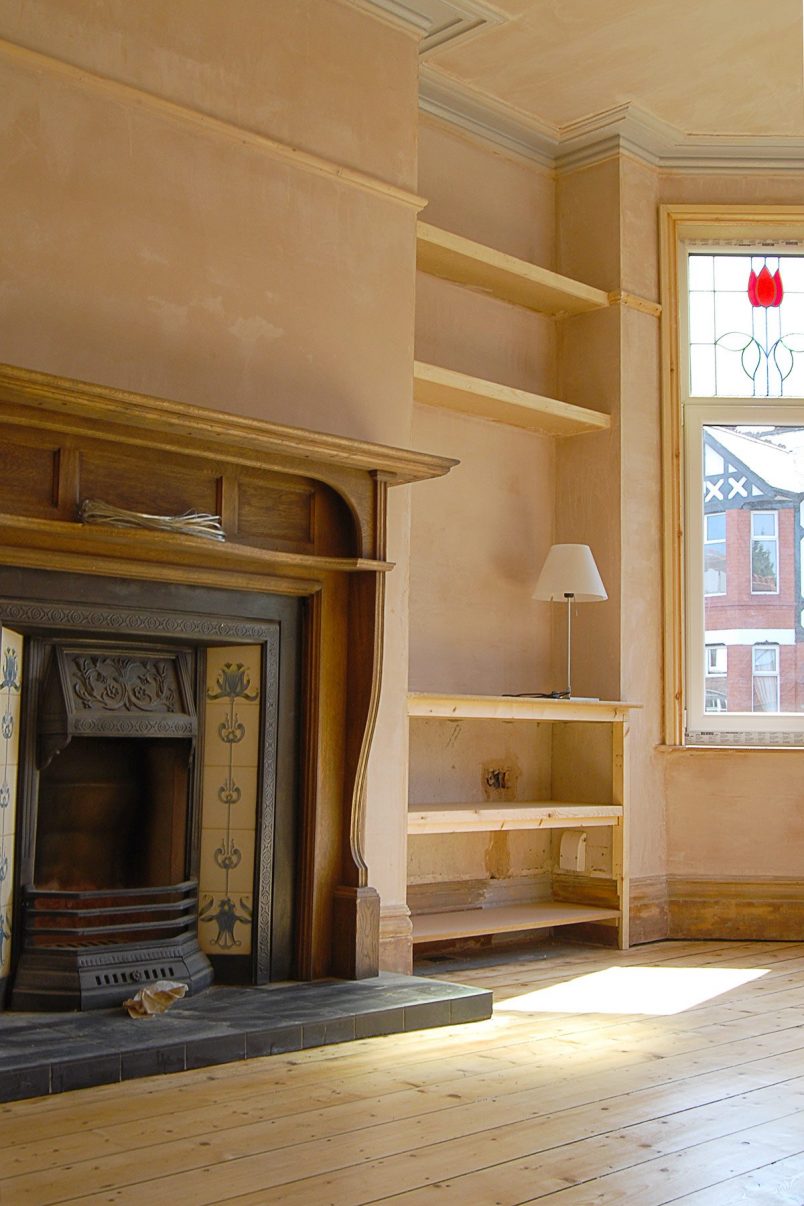 In the end, we found a new joiner who was great and built us new fronts for the cupboards. It wasn’t an ideal situation but it turned out okay in the end. 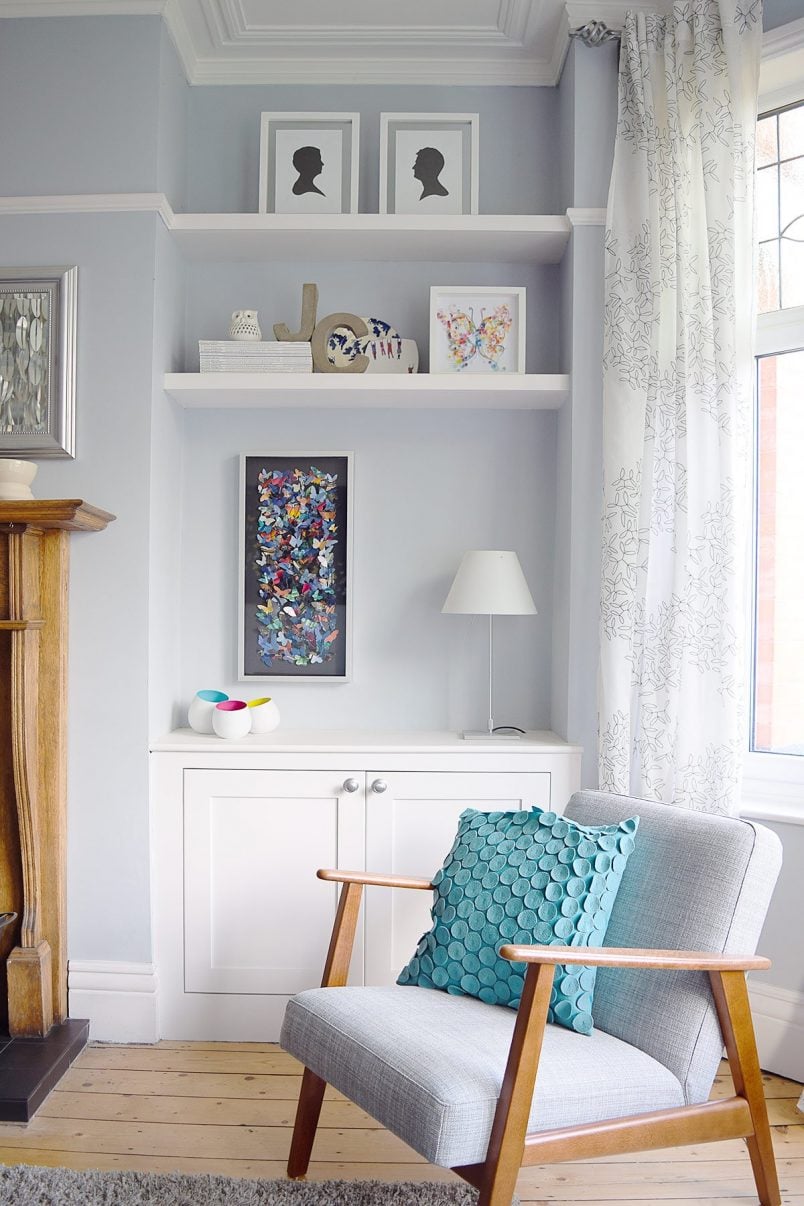 4. Removing The Kitchen Radiator (without the right tools)

One of the best decisions for our home we made was to remove the wall between the kitchen and the dining room. It really opened up the space and made the ground floor of the house flow much better.
We paid a builder to remove the wall and do all of the structural work but were left with a floating radiator that had been on the kitchen side of the wall. 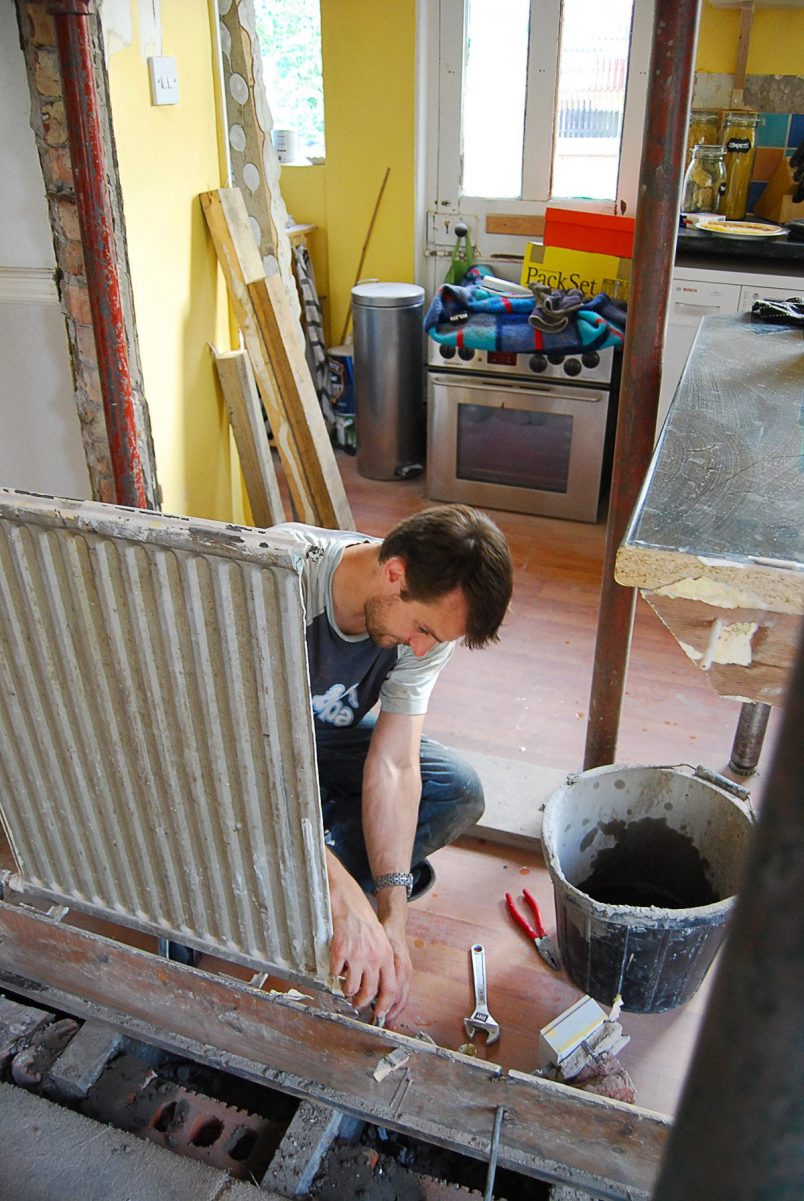 We would have paid to have it removed but Jan was too impatient to wait and tried to remove the radiator – fairly late in the evening – and ended up flooding the kitchen!

Needless to say, panic broke out and before we could turn the water off the kitchen was flooded and inevitably the laminate flooring was completely ruined. 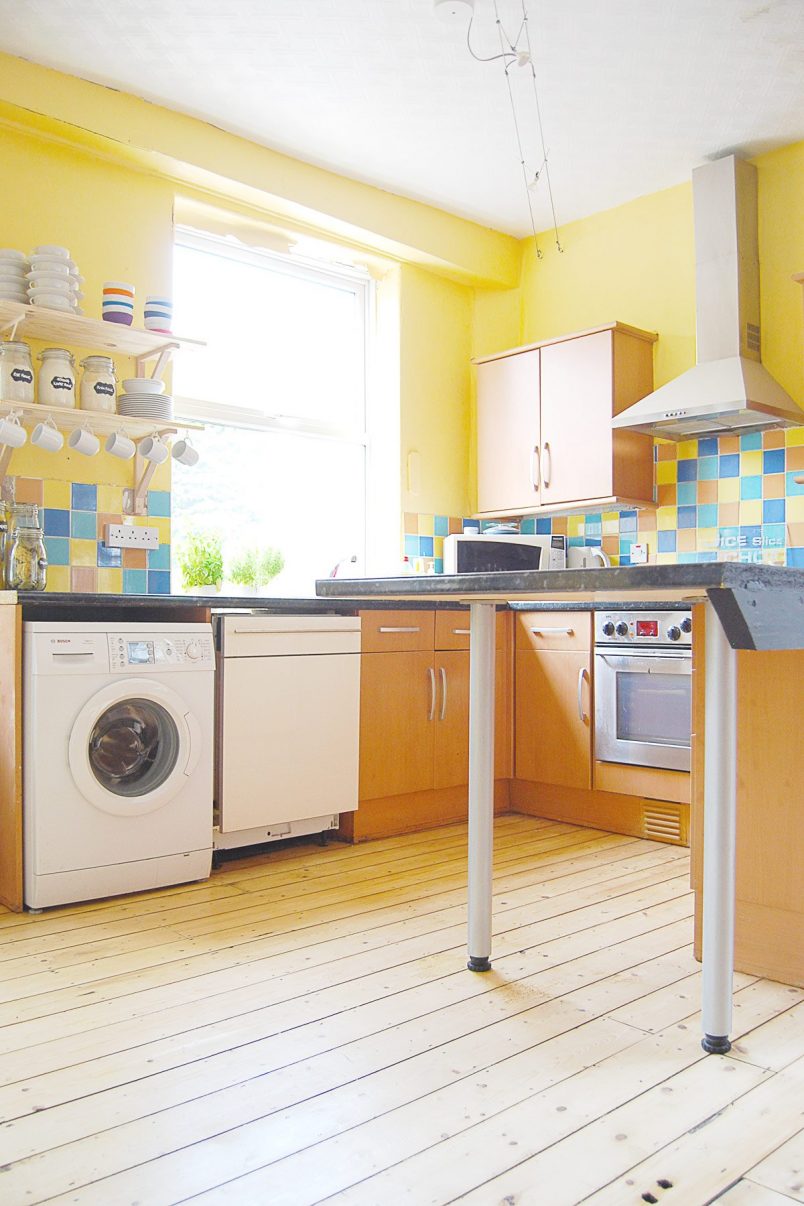 It’s not quite as bad as it sounds though and while it was super annoying at the time it meant that we were forced to sand the kitchen floor (you can read about our floor sanding efforts here and here) which definitely resulted in a much better-looking floor than if we’d left the horrible laminate flooring!

Now for a bit of a confession…

Some projects that made it onto the blog didn’t exactly turn out as we’d expected, either!

Aka. the blob. Yep, that’s what we called it. I really didn’t like it but it was better than having a bare bulb dangle from the ceiling. All I can say is don’t believe everything you see on Pinterest! 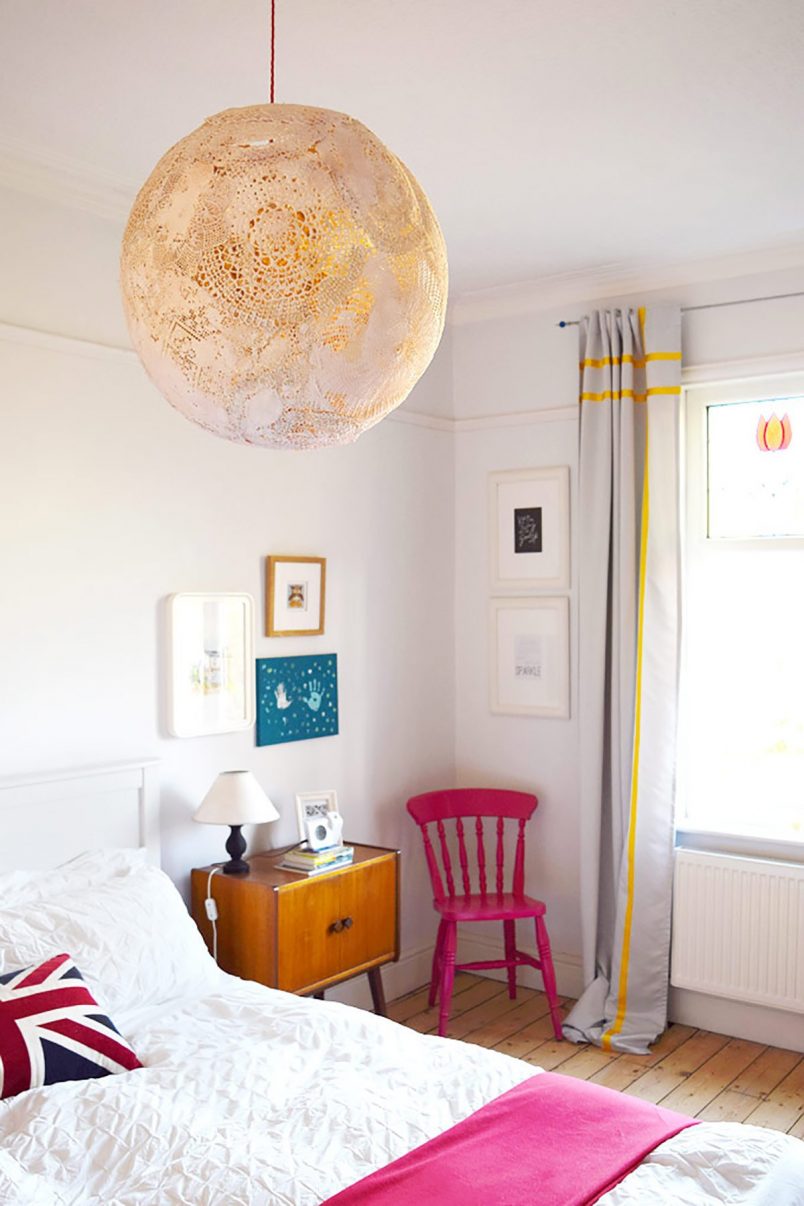 Even while making this lamp we had a bit of an incident.

I’d suspended the ball from the ceiling to be able to cover it in wallpaper paste and doilies but it turned out to be too heavy and the cord snapped. All we heard from the living room was a sudden thud followed by lots of squelchy bounce sounds. Needless to say, the trail of sticky wallpaper paste that the bouncing ball left dotted across our whole dining room was rather gruesome!

I liked how this project turned out but it didn’t last long. 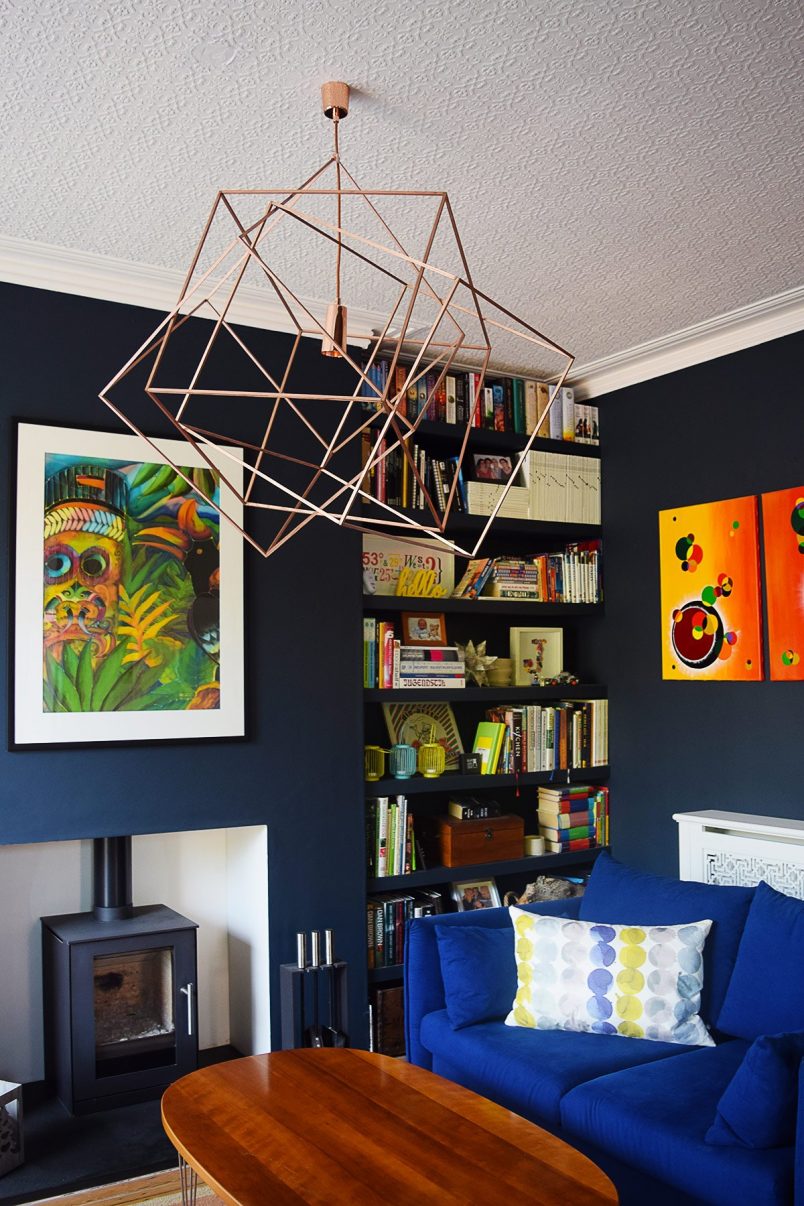 It was quite flimsy but I was also too impatient and hung the lamp up too early before the glue had had time to really dry.

The next morning when we came down stairs it looked like this. 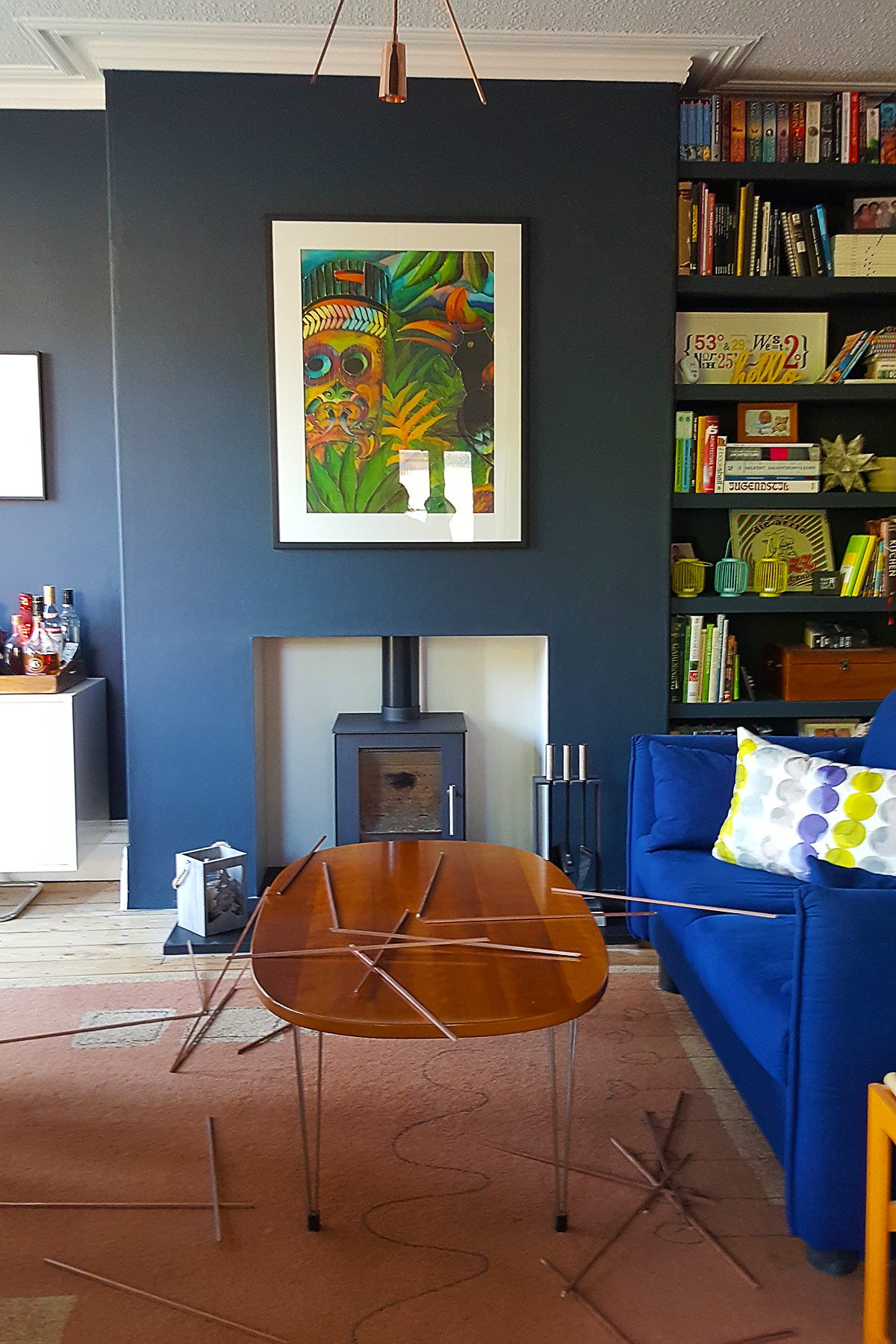 Not exactly what you can call a DIY success! I kept all of the pieces and had planned on putting it back together again but then we moved and I now think that it’s probably too small for our super high ceilings.

Luckily none of our project fails have been anything too major. One of the reasons that I think we’ve not had more projects go wrong is because we try to plan everything in as much detail as possible before attempting to DIY.
I’m still relieved that not more has gone wrong though!

Have you ever had any DIY disasters? Have you ever tried something you’ve seen on Pinterest (or a blog) that turned out to be a total disaster?

PS. If you follow us on Instagram Stories you’ll already know that we’ve just managed to top our list of DIY fails – litterally while writing this post! Let’s just say that pipes in old buildings are sometimes in the weirdest locations!