Ever since completing our concrete bookends, we’ve been dying to make something else out of concrete. It’s such a lovely material to work with, with endless possibilities and this time we decided to make a concrete picture frame. 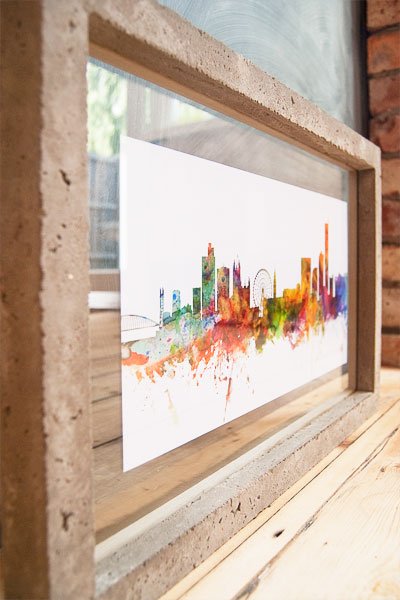 The principles of making this DIY concrete picture frame are the same as the concrete bookends that we made, but it is much more involved – mainly because you will have to make the mould for the frame. None of the steps are particularly difficult, but it does take a bit of time. 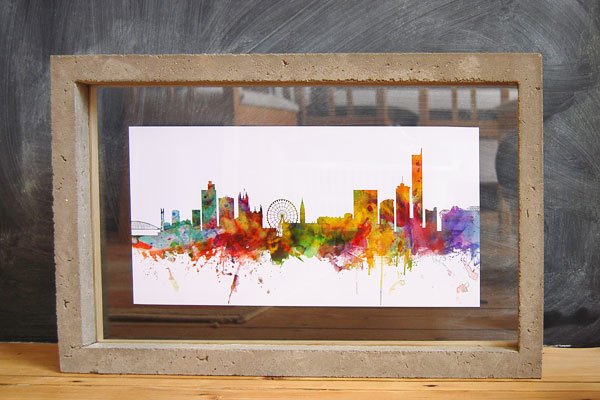 If you’d like to make one of your own, here’s how we did it. (Don’t be put off by the number of supplies and tools you’ll need, you probably already have most of them lying around).

This is what you will need: 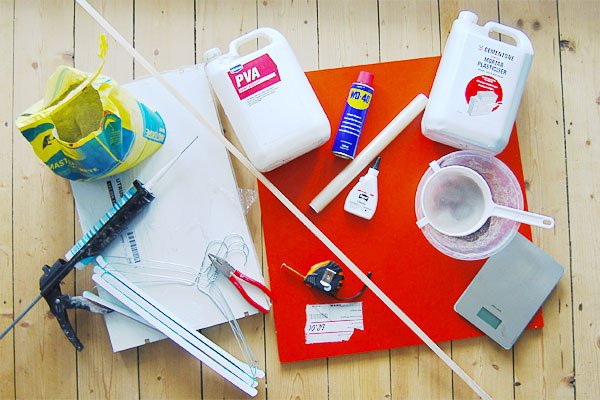 For the concrete mixture:

For the concrete mould:

This list seems long, but making the frame is actually pretty straight forward.

This is how to make it:

As a general overview of the process involved, you start by building the mould for the concrete. This consists of an inner and an outer frame. The concrete is then poured into the area between the two frames. Then after a bit of waiting, the concrete dries, you can remove the mould and frame your art.

Start by building the outer frame of the mould. For this, you will need your base (ours had a smooth Formica-y surface, so we weren’t too worried about the concrete sticking to it) and strips of wood. They should be as wide as you’d later like your frame to be thick.

Cut them to size so that you can build a rectangle on your baseboard and fix them into place. We used scrap bits of wood that we screwed around the edge to ensure that they couldn’t move. 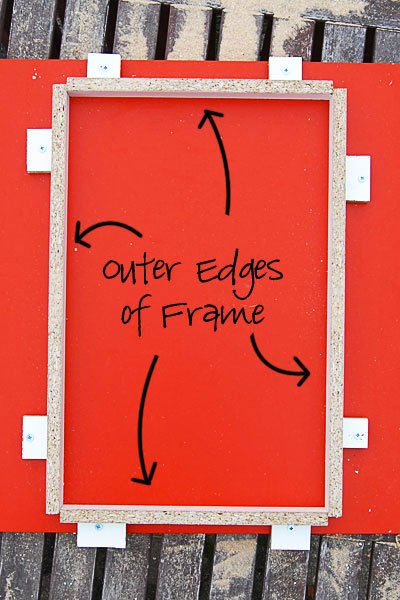 To make sure that no concrete can escape through any little gaps, we sealed around the inner edges where the base board and frame meet with some silicone. This probably wasn’t a necessary step, but we just wanted to make extra sure no concrete could escape.

#3 Prepare your inside mould

In the same way, that you prepared the mould for the outside of the frame, you can now prepare the inside mould. Cut your strips of wood to size and screw them onto the board. Make sure that the distances from the inner edge of the outside frame and the inside frame are equal on all sides. This time, we mitred the corners as the concrete will run up to them and we didn’t want any raw edges. 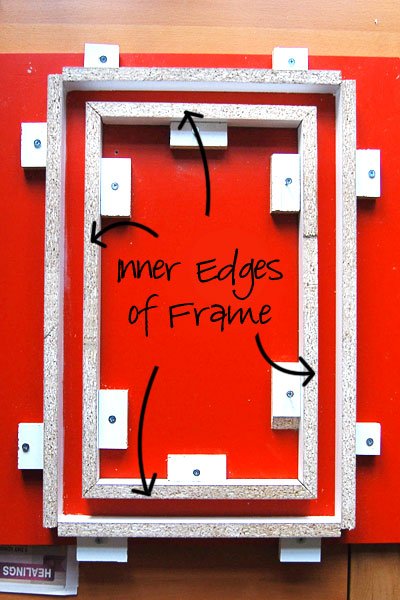 This is where things get a bit more complicated. You can already see the part of the mould where you’ll later be adding the concrete, but in order for you to be able to hold the glass, you’ll have to build a little ledge in the concrete for the panes of glass to later sit in front of.

It sounds a bit more complicated than it is. If you were to cut through the frame, this is what it would look like. 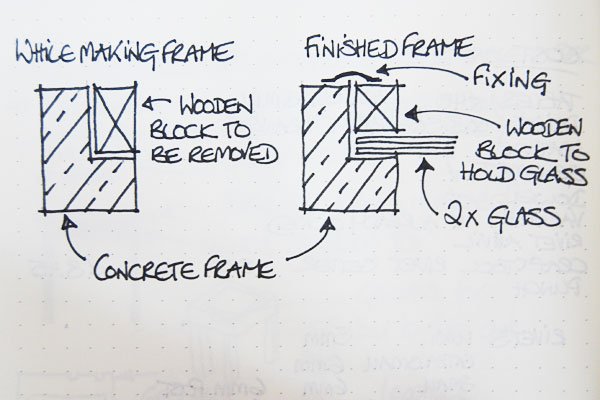 For this ledge you’ll have to make two separate wooden block frames – one will be the mould for you to pour the concrete against and one will be the frame that, when the frame is finished, sandwiches the glass into place. The frame that you’re using as a mould will have to be higher than the frame you’ll be using for your finished concrete frame because it has to include the thickness of your panes of glass.

Bend a wire rectangle to the size of your frame. Double check that it’ll fit inside the area of the frame where you’ll later be pouring the concrete (you really don’t want to be messing when you’ve mixed your concrete) and place to one side. 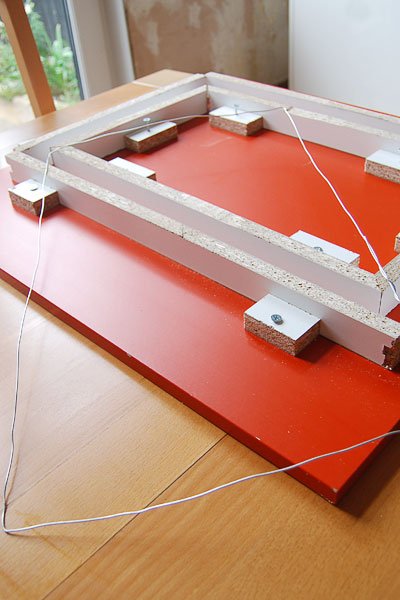 We used the same concrete recipe that we used for our concrete bookends. Weigh out your ingredients as exactly as possible. The ratio of sand to cement should be 60% to 40%. In addition, we used a few more additives like plasticiser (4%), PVA (4%) and water. 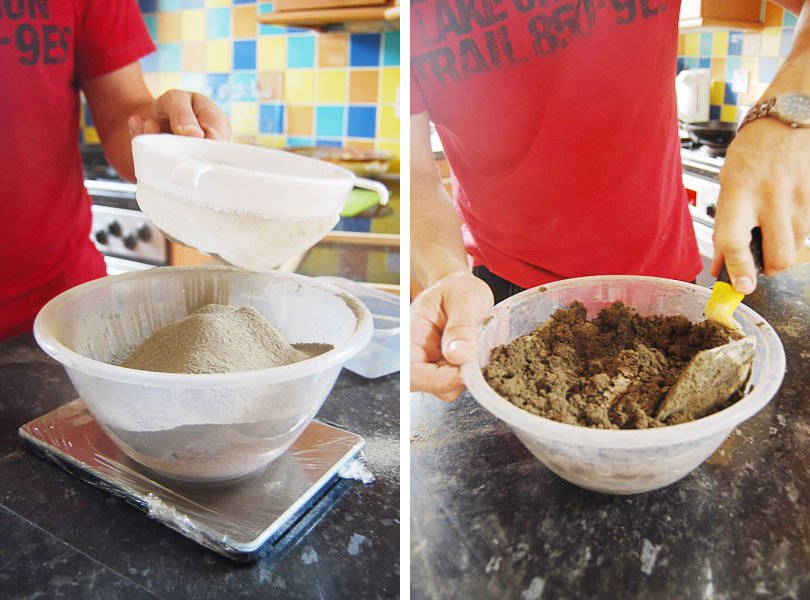 In numbers, this is what we used for the frame.

Start by combining the sand and cement. We sieved the concrete, to make sure that the mixture is completely lump free. In a separate container combine the plasticiser, PVA and some of your water. Then, combine the two mixtures along with more water and mix well. (You want the mixture to be quite stiff and not too sloppy. The plasticiser allows you to use less water than would normally be necessary.

This probably the nicest part of the whole job. Start by spraying your mould with WD40. It’s probably not needed, but a bit of extra slipperiness can’t be a bad thing for later on when you remove your frame from the mould. 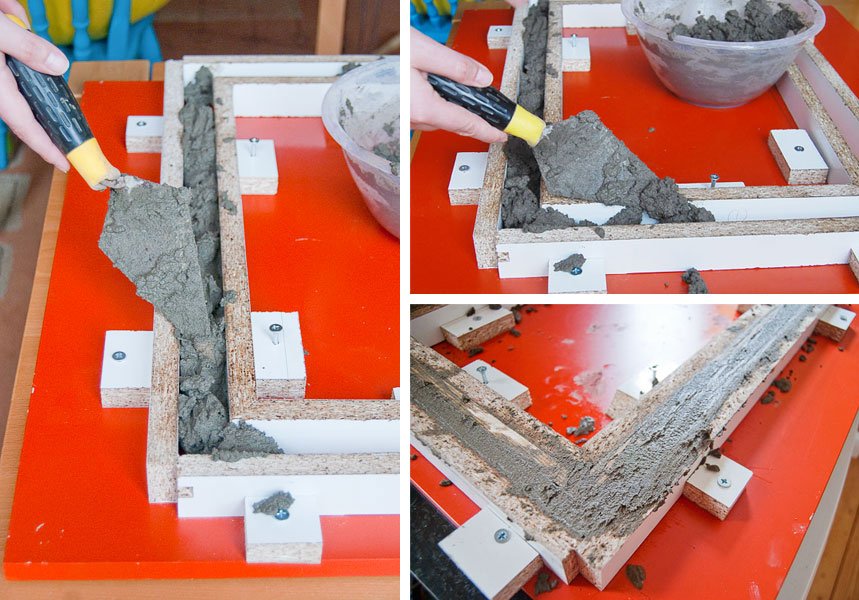 Then you can start to fill it with concrete. Just work your way around the mould, making sure that you press the concrete into every last corner of the frame. After filling your frame about 1/3rd of the way up, place your wire rectangle into the concrete, then continue to add the concrete till the mould is almost full. 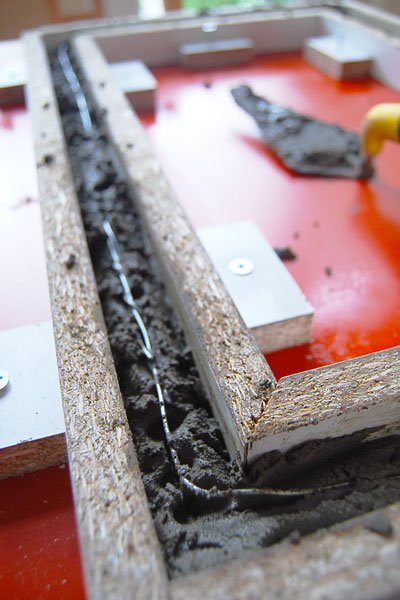 Now place your inner wooden frame into the mixture and squash into place. It’s really important that everything is level (this will be the back of your frame). Add the remaining concrete and fill your mould so that it’s completely full to the top. 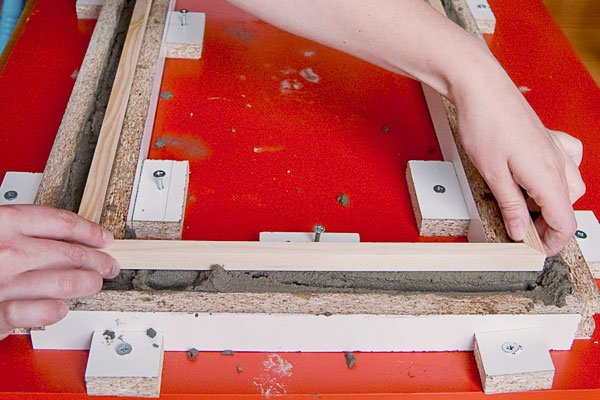 #8 Wait for a little bit

After an hour or two your concrete should have set a bit and be firm to touch, but not solid. Now it’s time to add your frame fixings. You won’t be able to screw into the concrete when it’s set, so you’ll have to attach them now. Just measure out exactly and screw them to the concrete. 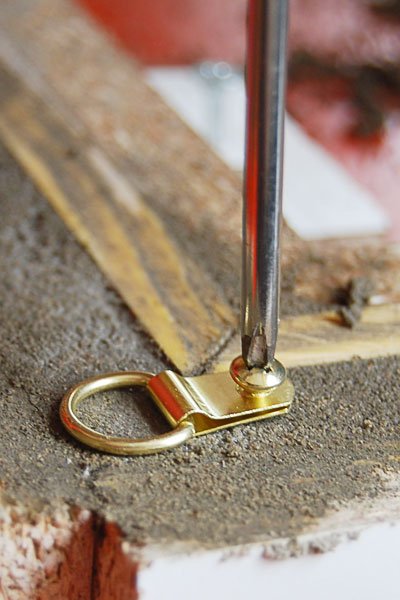 Don’t be tempted to remove the frame from the mould until your concrete has completely set. It just won’t be firm enough and will crack if you move it too soon. Even when you think your concrete has set, give it an extra day or to just to make sure that it’s set all the way through. We waited about 4 days before we even considered removing the mould.

#10 Remove your frame from the mould

When you’re 100% certain that the concrete is completely solid, you can start to remove the pieces of your mould. Be really careful, as the edges and corners will be delicate and can easily break off. 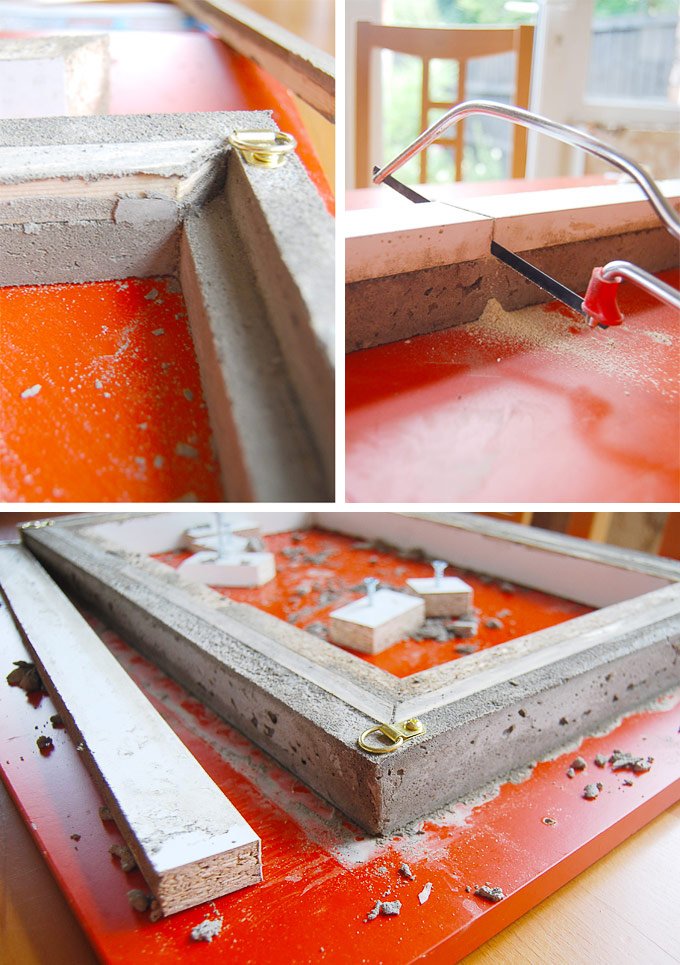 Add your first piece of glass (we had ours cut at a picture framing shop for just a few pounds) and then add your piece of art before adding the second piece of glass.

Now it’s time to add the second wooden frame that you prepared. If you’ve done your calculations right everything should be flush. 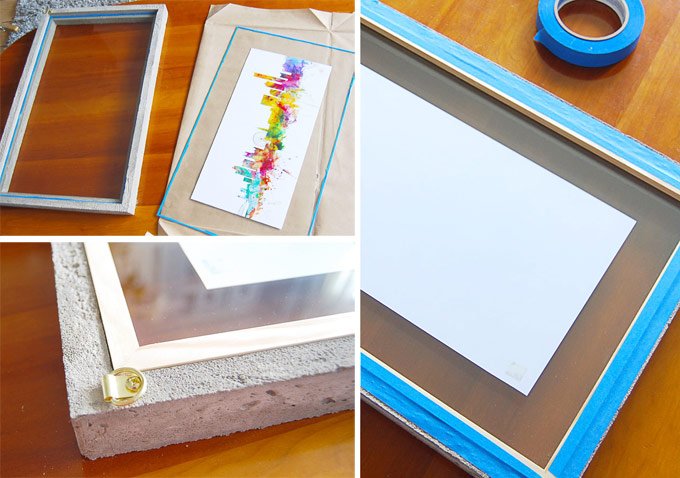 Now all that’s left to do is tape the wooden frame to the concrete frame to hold the glass in place. 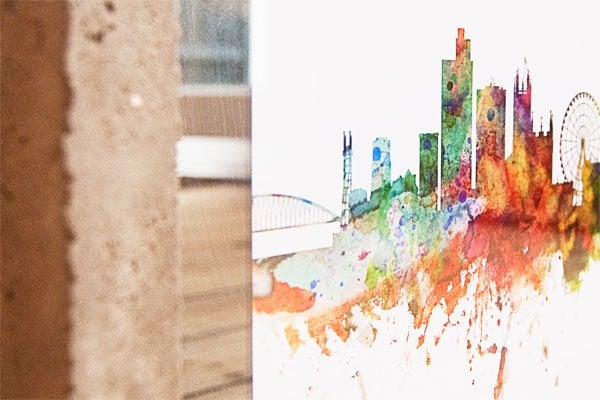 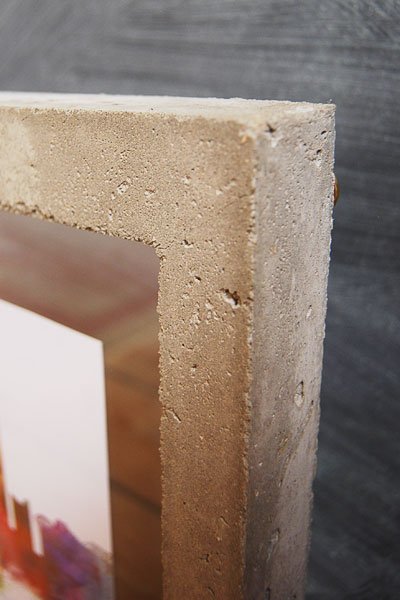 It has a lovely rough and industrial feel which contrasts really well with the delicate watercolour art (it’s the skyline of Manchester) in the frame. 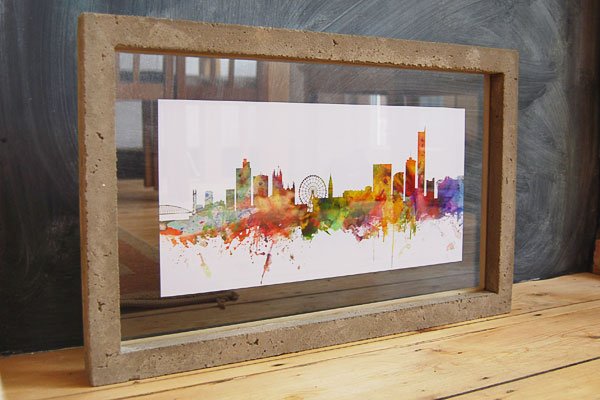 Now, all we need to do is find a place to hang it!

Have you ever made anything out of concrete?