It’s no big secret around here that I love concrete. I love the industrial vibe it gives and although most people think that it’s a cold and sterile material I actually think it has a lot of warmth. 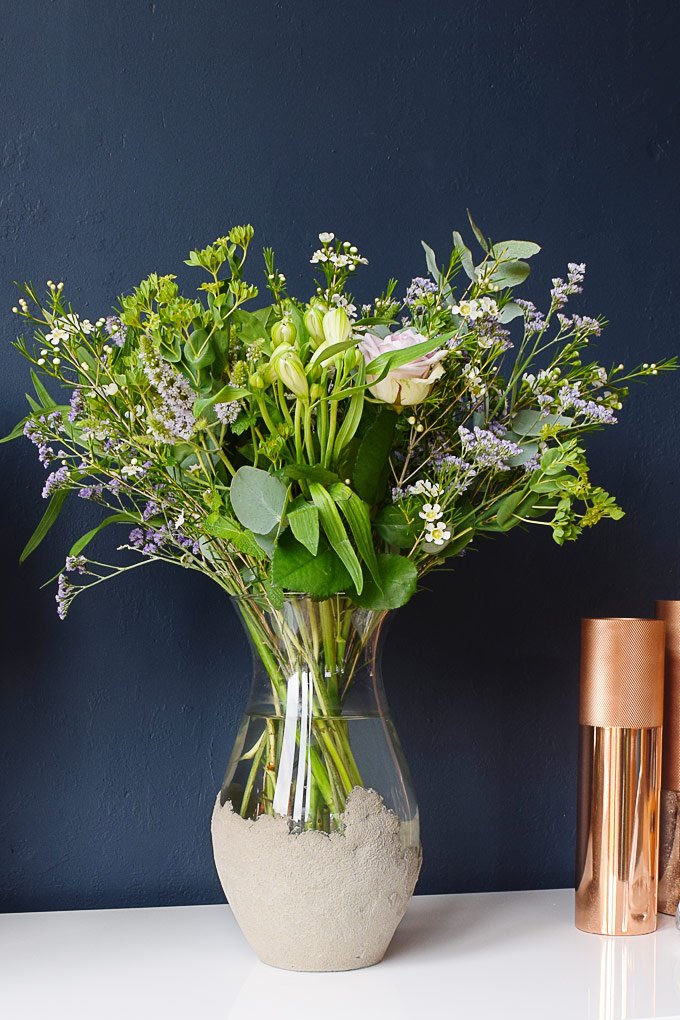 We’ve already tackled a few concrete projects, but after recently seeing a gorgeous concrete based vase (for a lot of money) I couldn’t resist having a go at creating my own version DIY concrete-dipped vase. Actually, it’s more of a concrete pushed up the side vase but you’ll see what I mean later on in the tutorial. 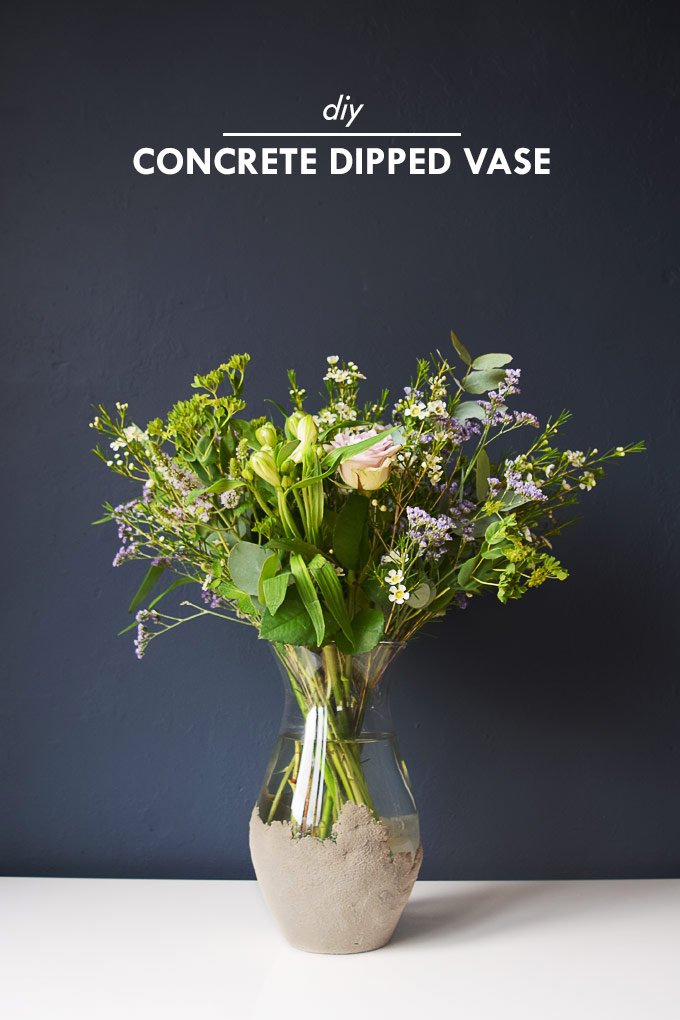 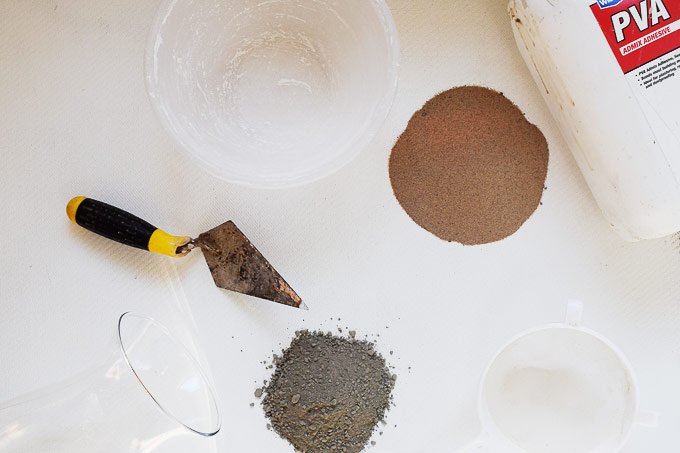 This is how to make a DIY Concrete Dipped Vase:

#1 The first step is preparing your vase. All you have to do is give it a good clean with some glass cleaner to remove any dirt and grease which will allow the concrete to adhere better. 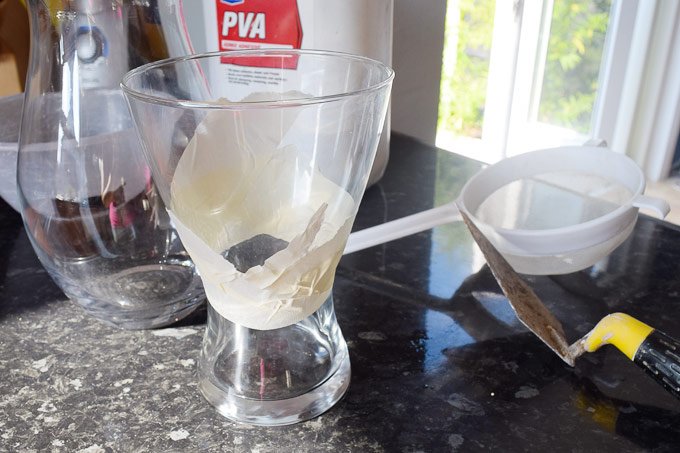 #2 Now it’s time to mix your concrete Start by weighing out your ingredients as exactly as possible. The ratio of sand to cement should be about 60% to 40%. In addition, we used a bit of PVA (about 2%) and water. 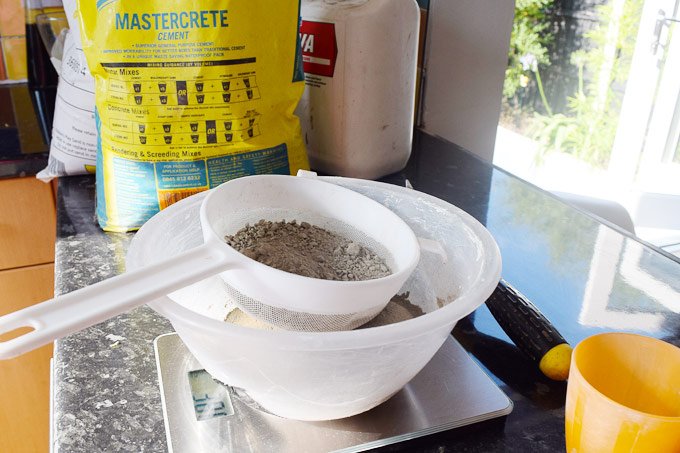 In numbers, this is roughly what we used for our DIY concrete dipped vase.

Start by combining the sand and cement. We sieved the concrete, to make sure that the mixture is completely lump free. In a separate container combine the PVA and some of your water. Then, combine the two mixtures along with more water and mix well. You want the mixture to be quite stiff and not too sloppy. 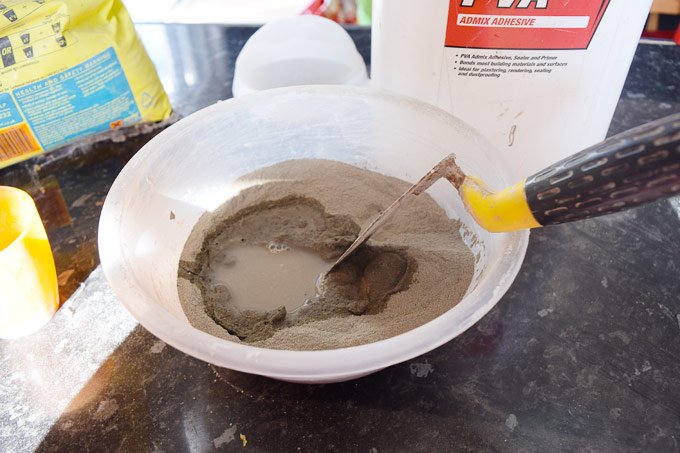 For our other concrete projects, we used plasticiser but didn’t bother on this project as is looser and not in a mould. If it shrinks it really doesn’t matter too much as part of the charm of this project is the roughness of the concrete in contrast to the smooth glass.

#3 When you’ve mixed your concrete it’s time to start “dipping” your vase. The glass surface is really smooth which means that the concrete doesn’t adhere well to the glass. Just dipping the vase in the concrete only leaves a very thin coat of concrete as most of it slides back down the vase and doesn’t leave enough to cover it. 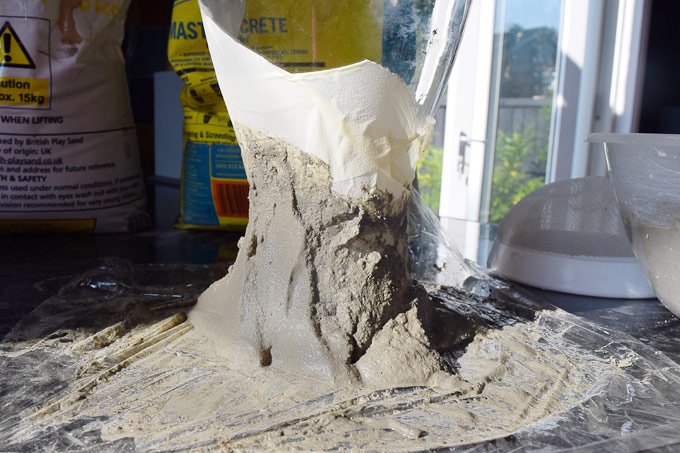 Instead of dipping the vase you have to press it against it. Lay out a few layers of clingfilm, then place the vase in the middle. Now scoop up some of the concrete and place it around the base of the vase. With the help of the cling film push the concrete up the sides of the vase. The concrete has to be fairly stiff otherwise it’ll run down the sides again. Just keep pushing and smoothing the concrete until you’re happy with the result. 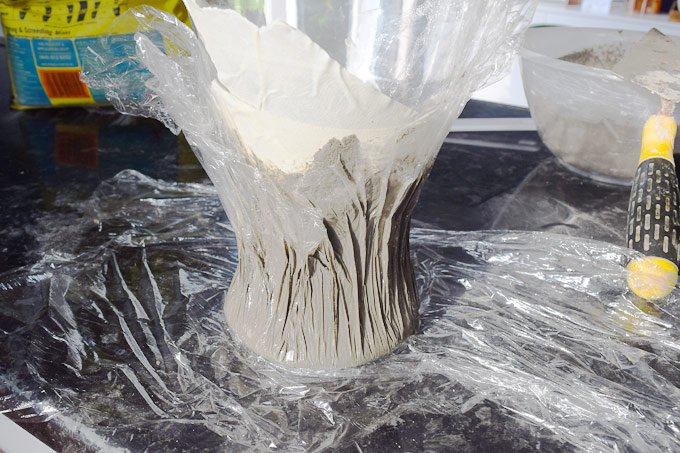 We tried a couple of different versions including taping off a clean edge but the result we like best was where we loosely pressed the concrete against the vase and let the edge form naturally. 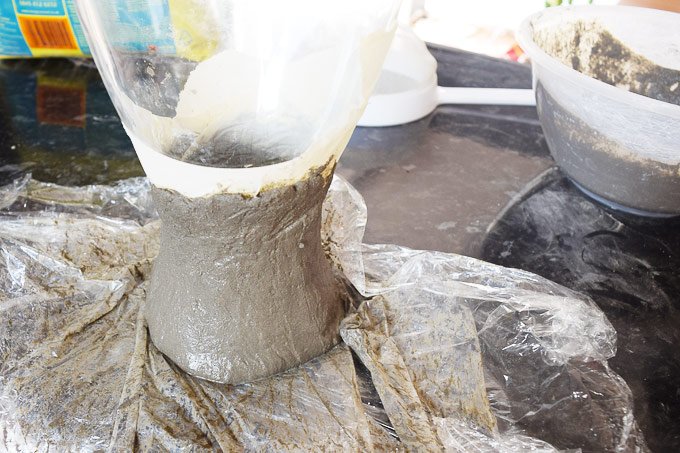 #5 Now for the most difficult part of the project – waiting. Don’t be tempted to touch the concrete before it’s set. Just put the vase to one side and leave it to set for a couple of days.

#6 Concrete is rough so depending on where you’re planning to place the vase you may want to add some felt to the base, which is exactly what we did. 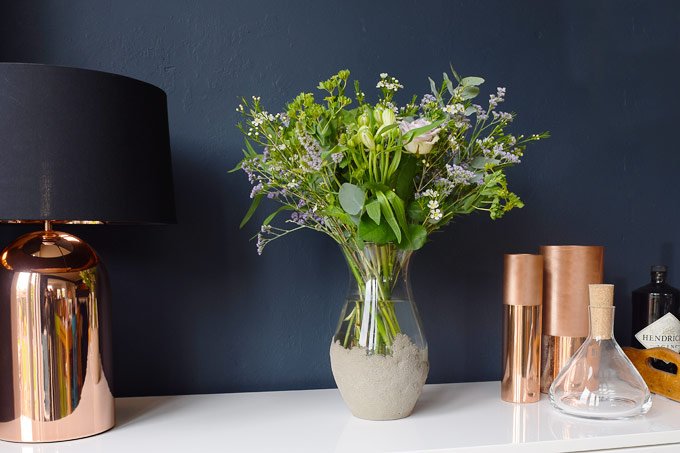 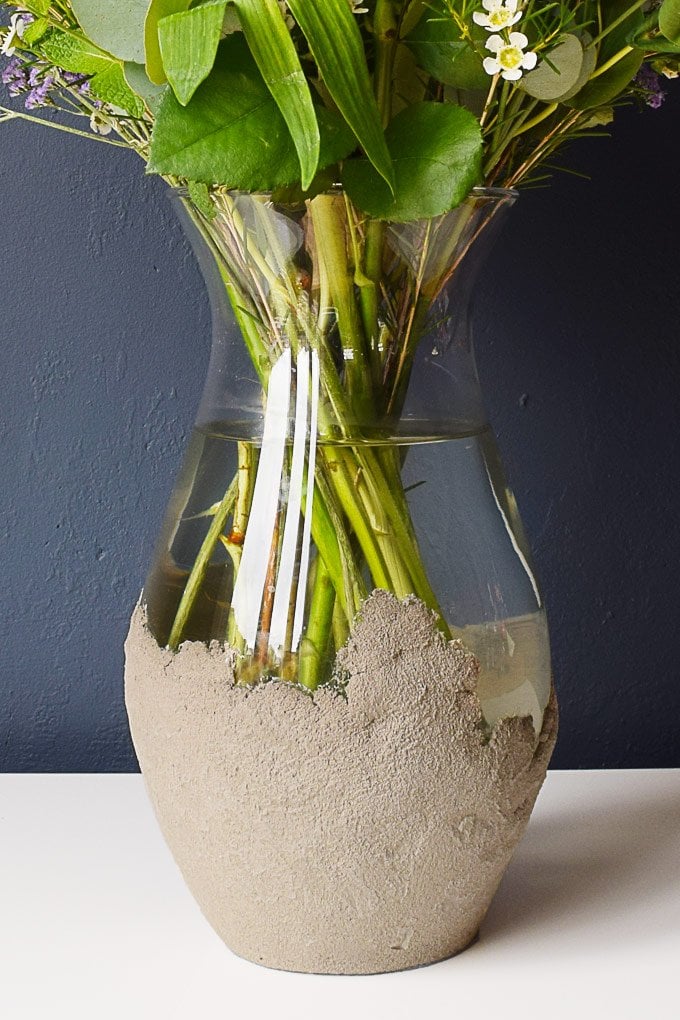 Admittedly the vase didn’t turn out quite like I’d expected but that’s not a bad thing. I love how the rough concrete contrasts with the smooth and shiny glass and it was easy and quick to make, too. 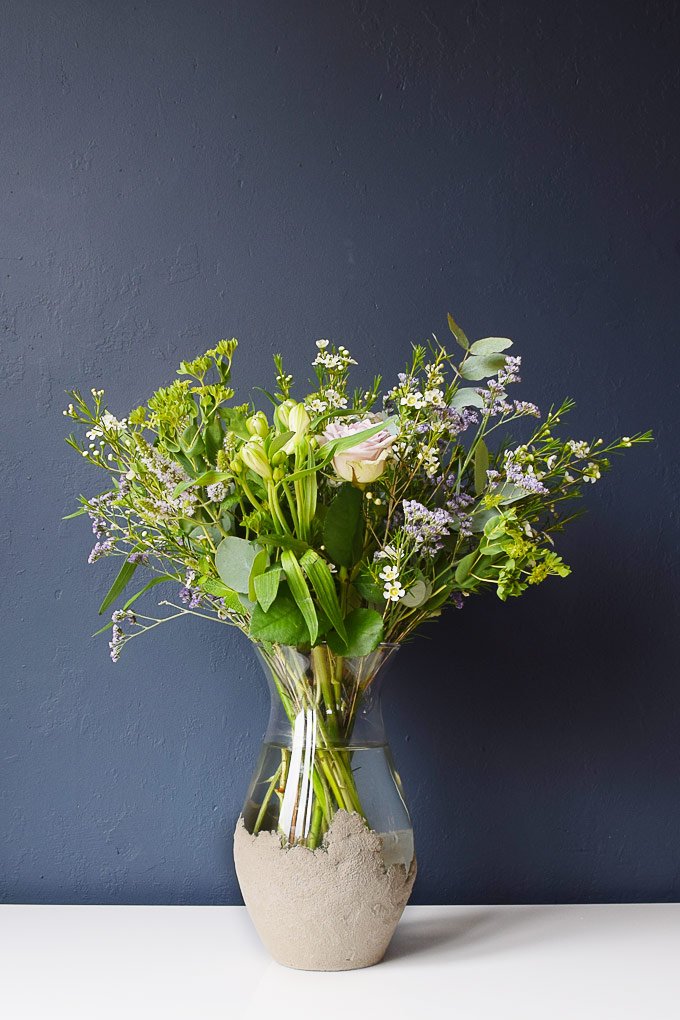 Have you ever tried any projects with concrete? What’s your favourite material to work with?

PS. You can check out some of our other concrete projects here: