It’s happened again. We’ve only been in our new apartment for a couple of weeks and I already hate our kitchen. 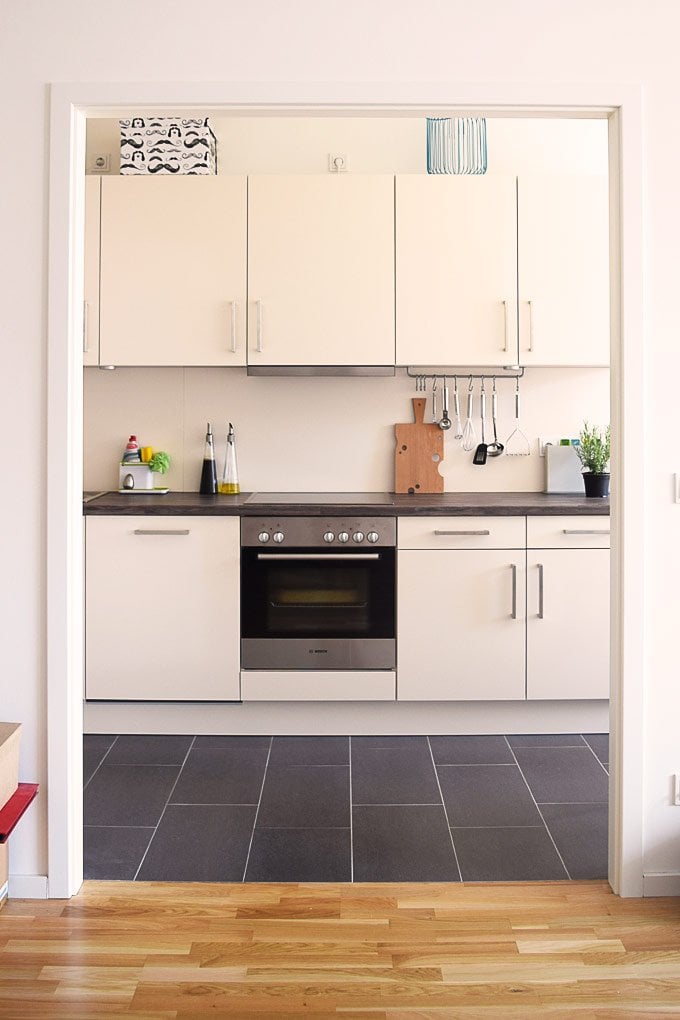 Yes, it’s new and yes, it’s nowhere near as bad as our previous one but for some reason, it seems like we have a knack for choosing homes that have dodgy kitchens.

One of the things we regret about our previous home renovation is that we never got round to replacing the kitchen. We hated it from the moment we moved in and it was only ever meant to be a very temporary solution but 6 years later when we sold our home we were still living with the same kitchen that we thought wouldn’t even last a year. 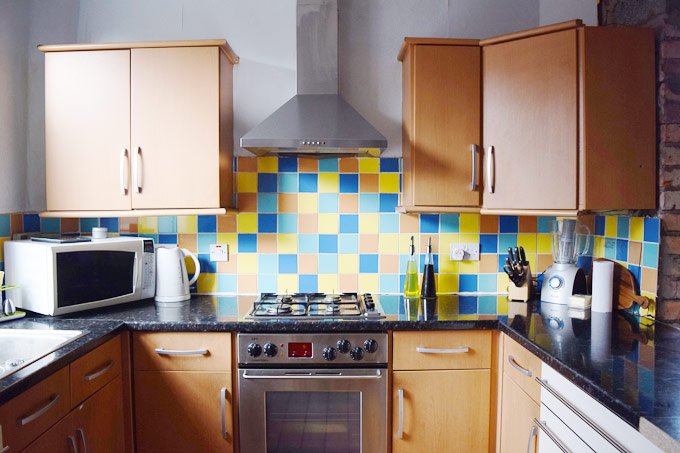 On the surface, our current kitchen is definitely an improvement. It’s new, the cupboards aren’t falling off the walls and it’s already so much easier to keep clean but that’s about where it stops.

It’s way too small for all of our stuff which is a surprisingly large amount of junk considering I don’t actually like cooking. The real problem, however, is that the kitchen has been badly planned. As we’re only renting (we’re already busy house hunting, so hopefully it’ll only be for a short while) it doesn’t matter too much but we will still have to make it work for us until then. 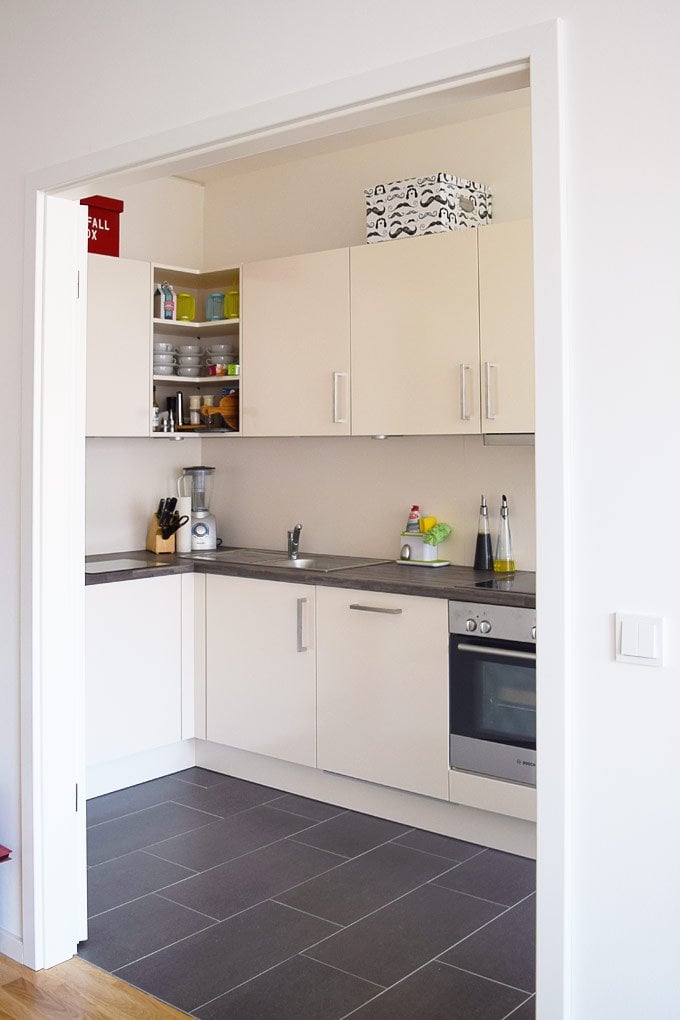 On the plus side, every dodgy kitchen we live with helps us learn from kitchen planning mistakes and hopefully it will help us avoid them in the future.

Here are just some of the reasons the kitchen annoys us and some kitchen planning mistakes to avoid in the future:

There’s nothing wrong with a small kitchen but it’s even more important than ever to get your storage right if you don’t have a huge amount of space.

If you have corner units make the most of them. There are so many clever space saving solutions available that there’s no need for a dodgy corner unit like this one. 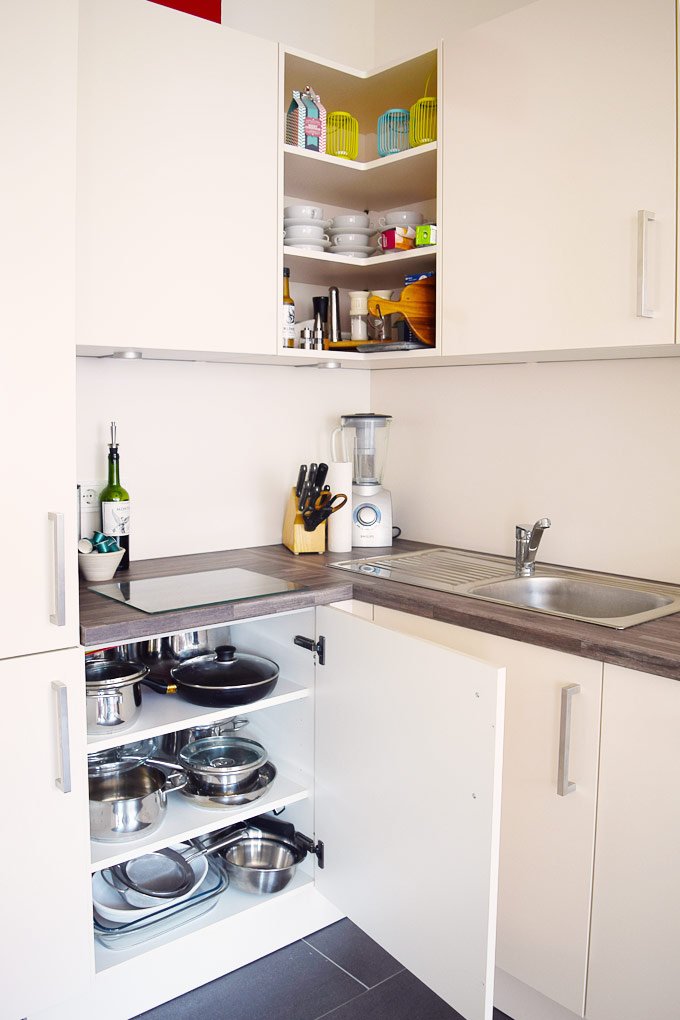 There’s nothing in the complete corner – such a waste of space!

The cupboard above isn’t much better either. It’s such an awkward shape that I have no idea how to use it.

It’s no secret that I’m a huge fan of pan drawers. I honestly can’t understand why anyone would ever consider anything else. It makes searching for items so much easier than rummaging around at the back of the cupboard to find tins that have passed their use-by date. 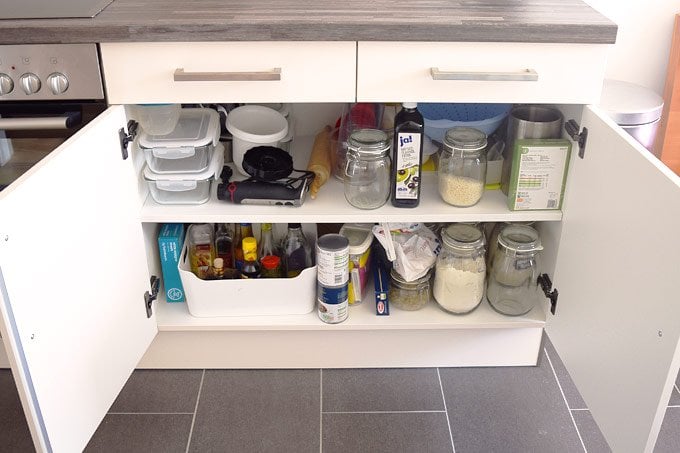 #2 Missing out on storage options

Again, if you only have a small space make the most of it. Use every little bit of space available which includes the area under your oven. This could easily have been a drawer but instead, the kitchen planners decided to just stick a fixed piece of panelling on it. Such a waste, especially as we only have two drawers in the whole kitchen! 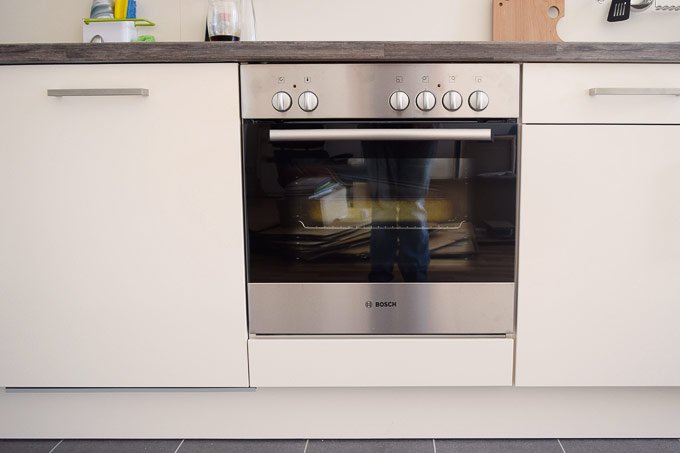 #3 Not having enough worktop

Even if I’m not a keen cook, I do like to be able to have space to work. Of course, there are always going to be limitations but I personally like as much workspace as possible.

This is a bit of a big one and admittedly something that can’t easily be changed. I hate the way the layout of this apartment has been planned. Out kitchen is fairly long and narrow and I can’t even begin to tell you how much the layout annoys me. 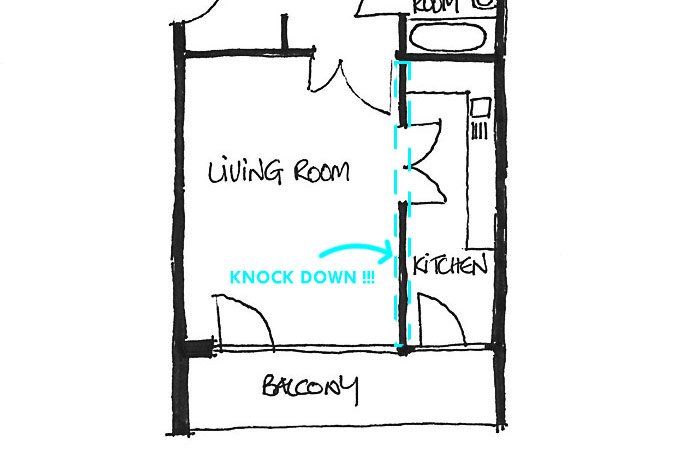 The wall just shouldn’t be there! The space that’s left is quite narrow but it’s too wide to just waste. 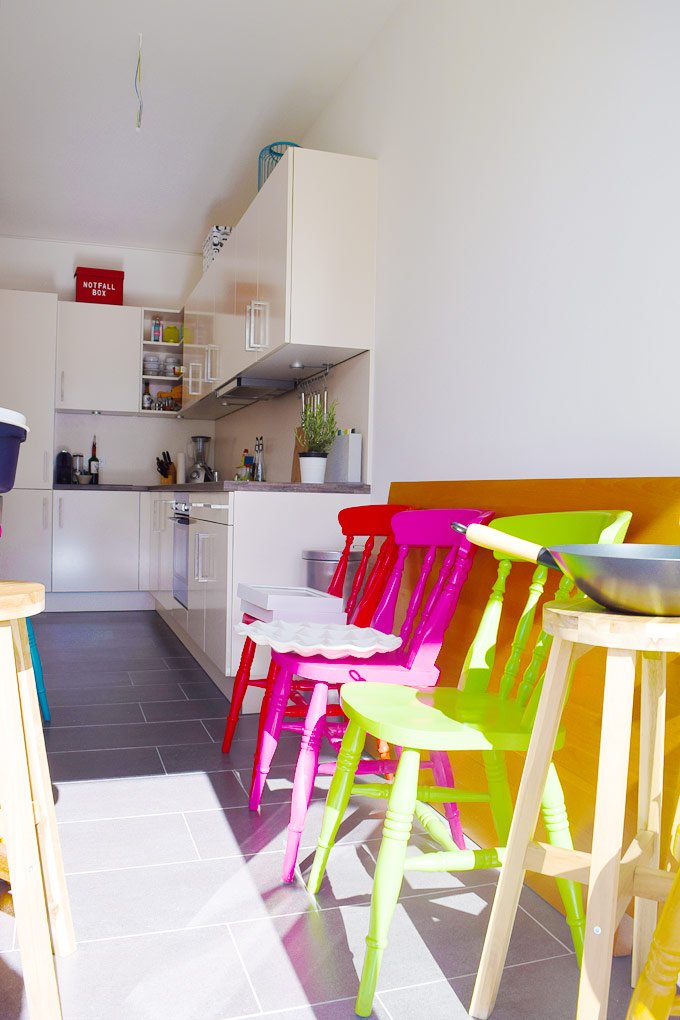 There’s just enough space for a small table and although I’m not a big fan of open shelves we’ll also be adding some for vital extra storage!

#5 Soft Closing Doors (and the weird cupboards in our kitchen)

Who doesn’t love a soft closing door and drawer? It’s such a small thing but it really nice to have. Whilst our kitchen does have soft close drawers (yep, all two of them) it also has something really weird which I’ve not seen before. 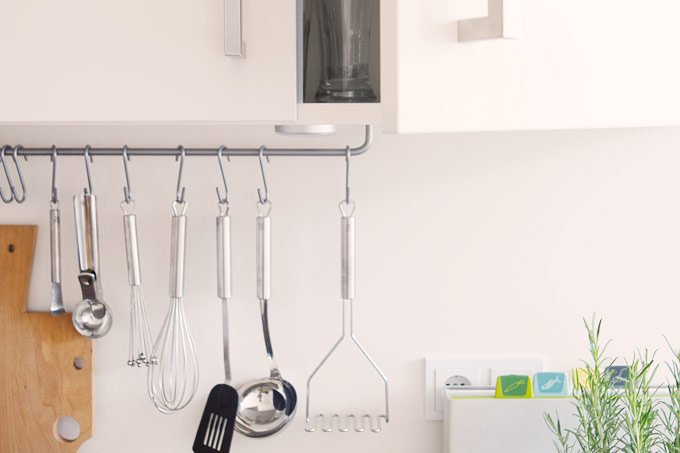 The cupboards have little plastic lips on them (you can just about see the light strip along the edge of the open cupboard). I assume it’s there to completely seal the cupboard when it’s closed but because of this, you have to open both cupboard doors even if you only want to open one side.

#6 Not enough sockets (in the right positions!)

Why are there never enough sockets in kitchens? In our case there not only aren’t enough in the kitchen area there aren’t any in the rest of the kitchen at all! Well, unless you count the rather random socket that’s on the wall above the wall-hung cabinets! 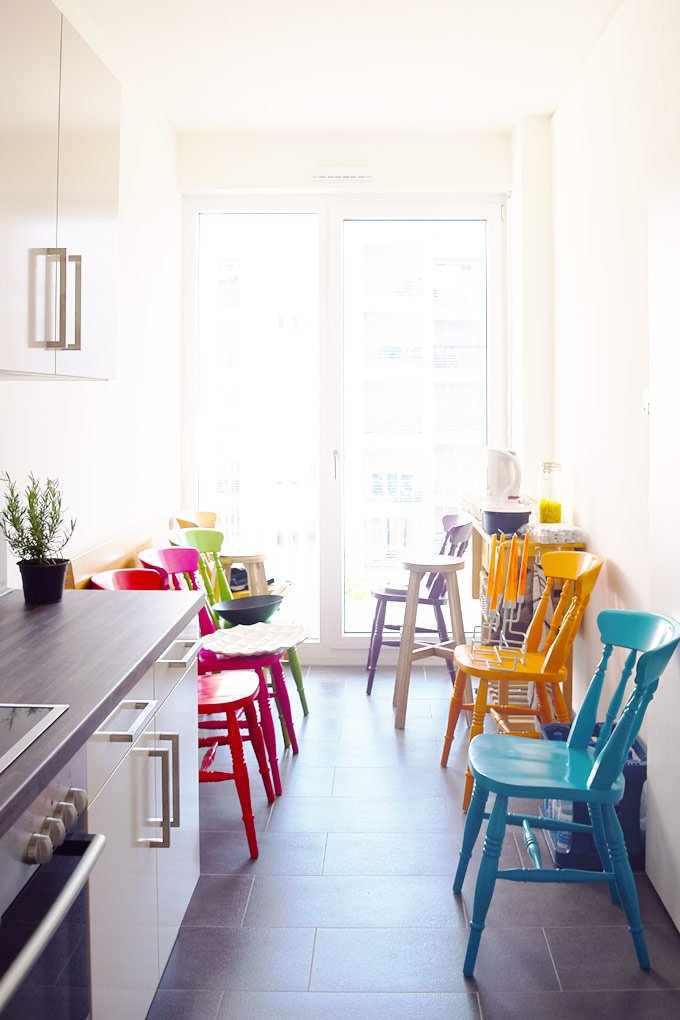 In the area that we currently have crammed full of chairs and junk, there’s no light fitting and not a single socket. So, even if we do manage to squeeze a table and chairs into the room we’ll inevitably be sat in the dark.

I would love to knock the wall down between the kitchen and the living room but the large double doors at least give us a partial open-plan feeling.

The only problem with them is that they don’t quite work with the layout of the kitchen as it’s impossible to open the fridge door when the double doors are open. 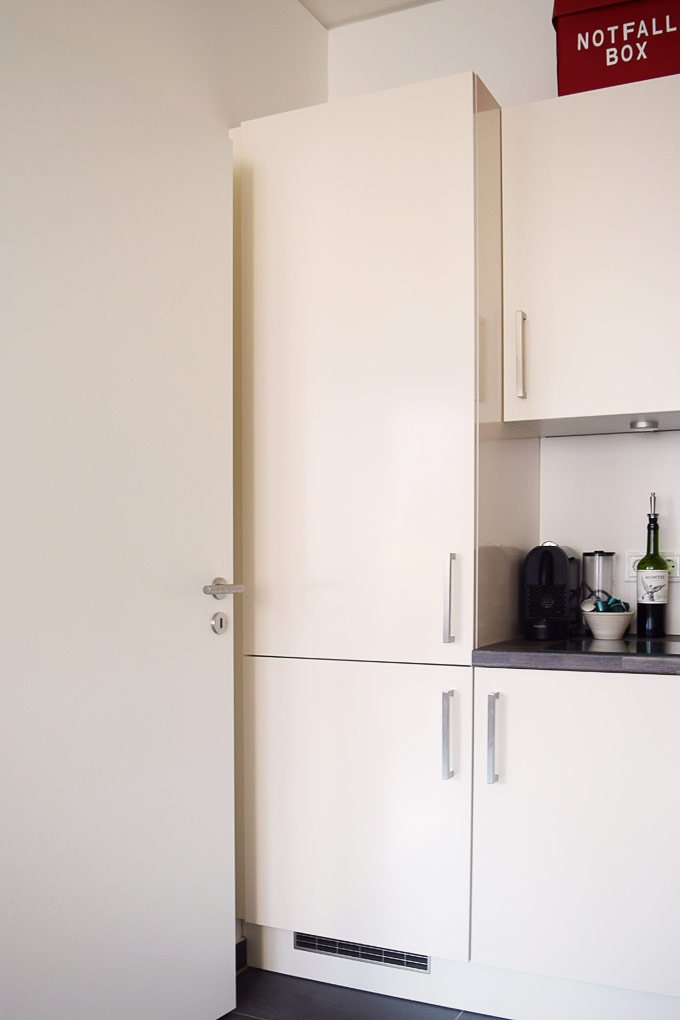 There are loads of other little things that annoy me about this kitchen but in the greater scheme of things, none of these things are real problems. They’re just things that I find a bit annoying and are things that we will definitely try to avoid when we’re planning our new kitchen.

I probably shouldn’t be complaining too much anyway – at least we have a kitchen in our apartment which in Germany is fairly unusual. In most apartments, you have to buy your own kitchen when you move in.