My love affair with all things concrete goes back a long way. I started my first concrete experiments about 12 years ago. I know concrete is still a bit of in-thing, but I’ve always loved it. Until now, I hadn’t been able to convince Jan that our home needed a few concrete items, but I’ve finally managed to sneak in this little project. Let’s face it, what else are we going to do in this miserable wet weather than get crafty! 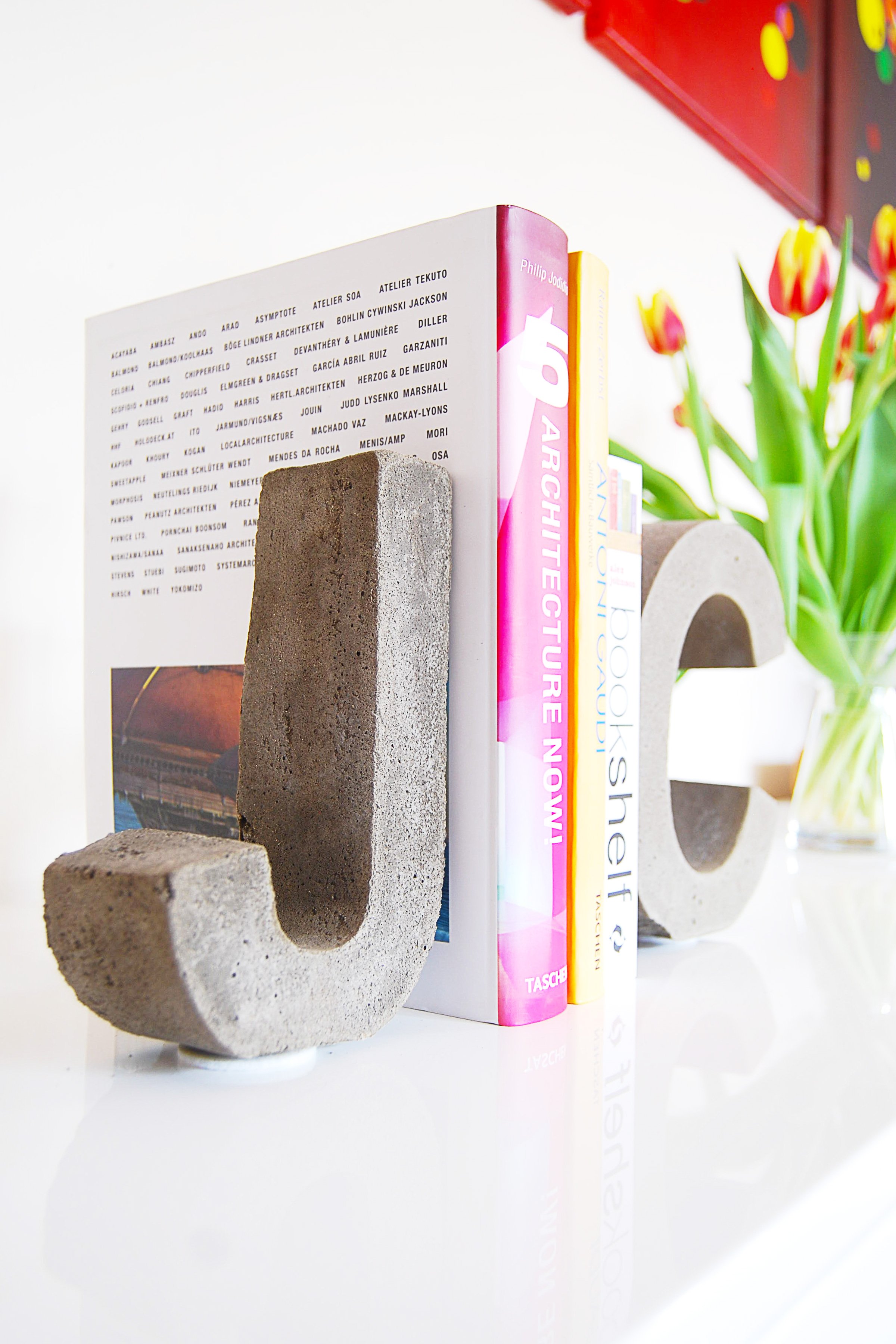 There are loads of tutorials for similar concrete letters out there, but most of them seem to be made out of just cement and not concrete. We also didn’t want to use quick setting concrete, as we wanted a smooth & even finish and decided that we’d achieve a finer consistency by mixing it ourselves.

So, after a bit of experimenting, this is what we’ve come up with.

This is what you will need: 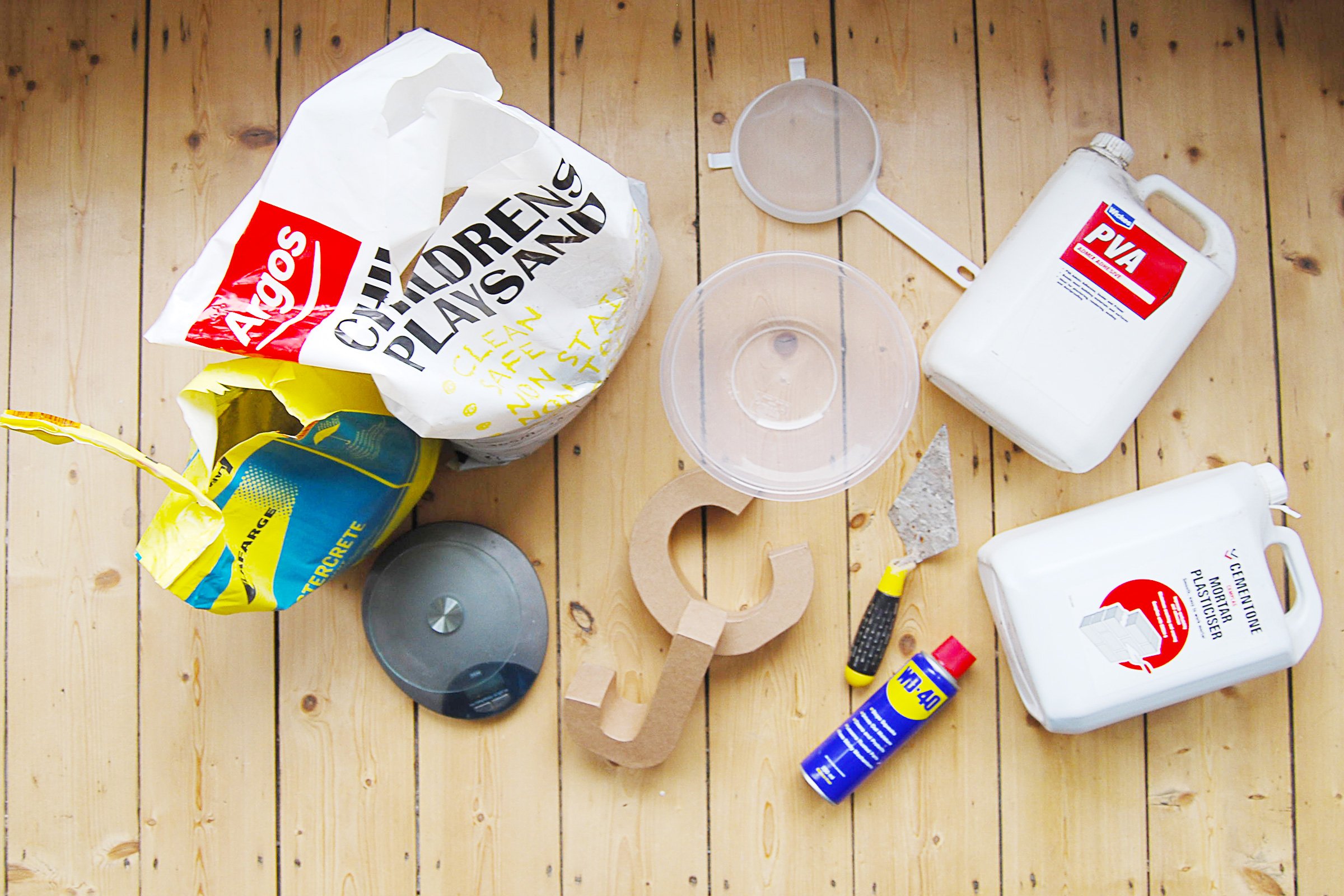 This is how to make DIY concrete letter bookends:

#1 Start by preparing your mould. As we’re using cardboard letters, the first step is to carefully cut away the back of the letter with a craft knife and remove anything that’s inside it. 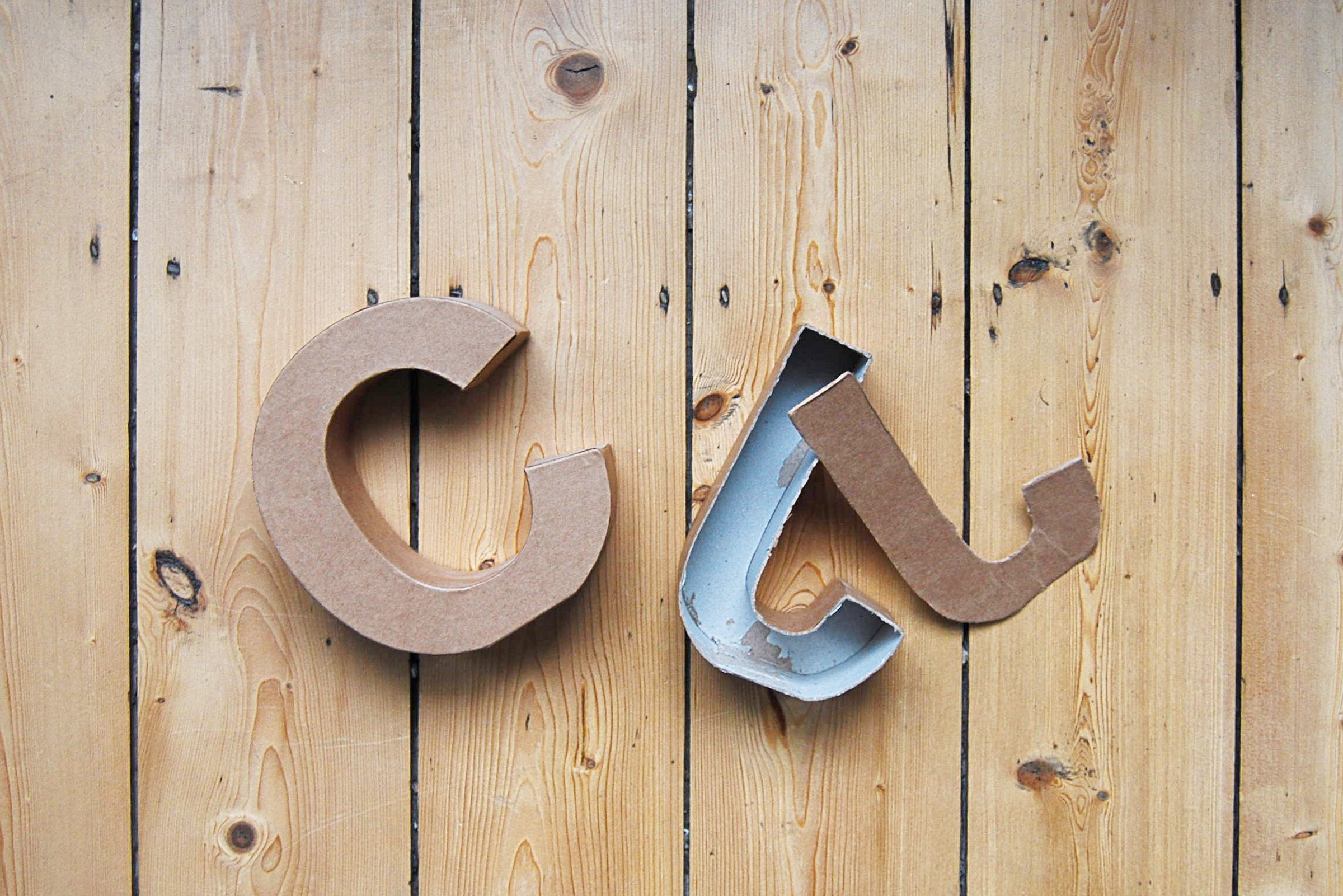 #2 Spray the inside of the mould with WD40. It’ll provide a kind of slippery layer to the mould which will stop the concrete sticking to it. 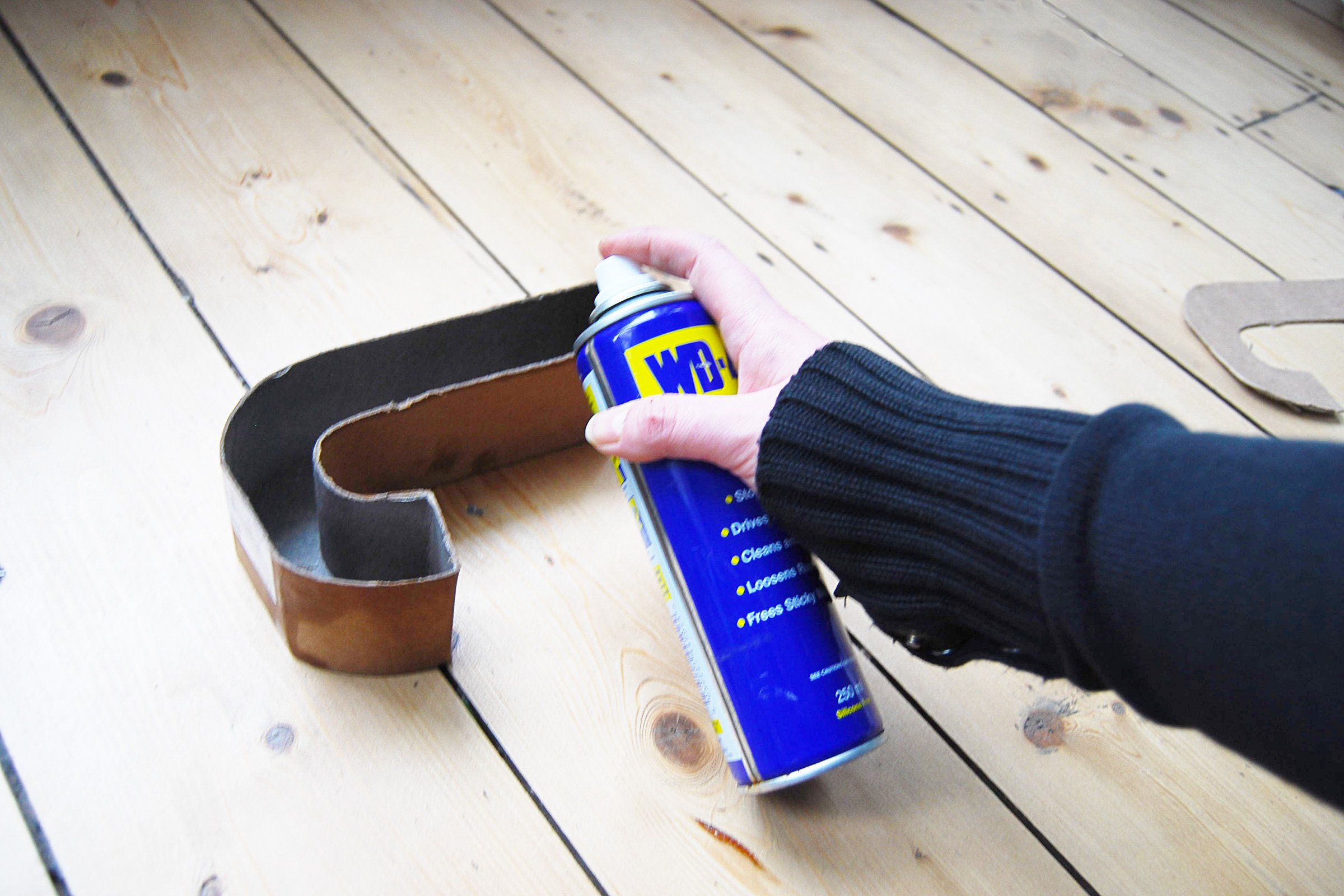 #3 Weigh out your ingredients as exactly as possible. The ratio of sand to cement should be 60% to 40%. In addition, we used a few more additives like plasticiser (2%) PVA (2%) and water.

In numbers, these are the amounts that we used to make both letters.

Start by combining the sand and cement. We sieved the concrete, to make sure that the mixture is completely lump free. In a separate container combine the plasticiser, PVA and some of your water. Then, combine the two mixtures along with more water and mix well. (You want the mixture to be quite stiff and not too sloppy. The plasticiser allows you to use less water than would normally be necessary. If the mixture is too sloppy, it will soften the cardboard too much and your mould will warp. 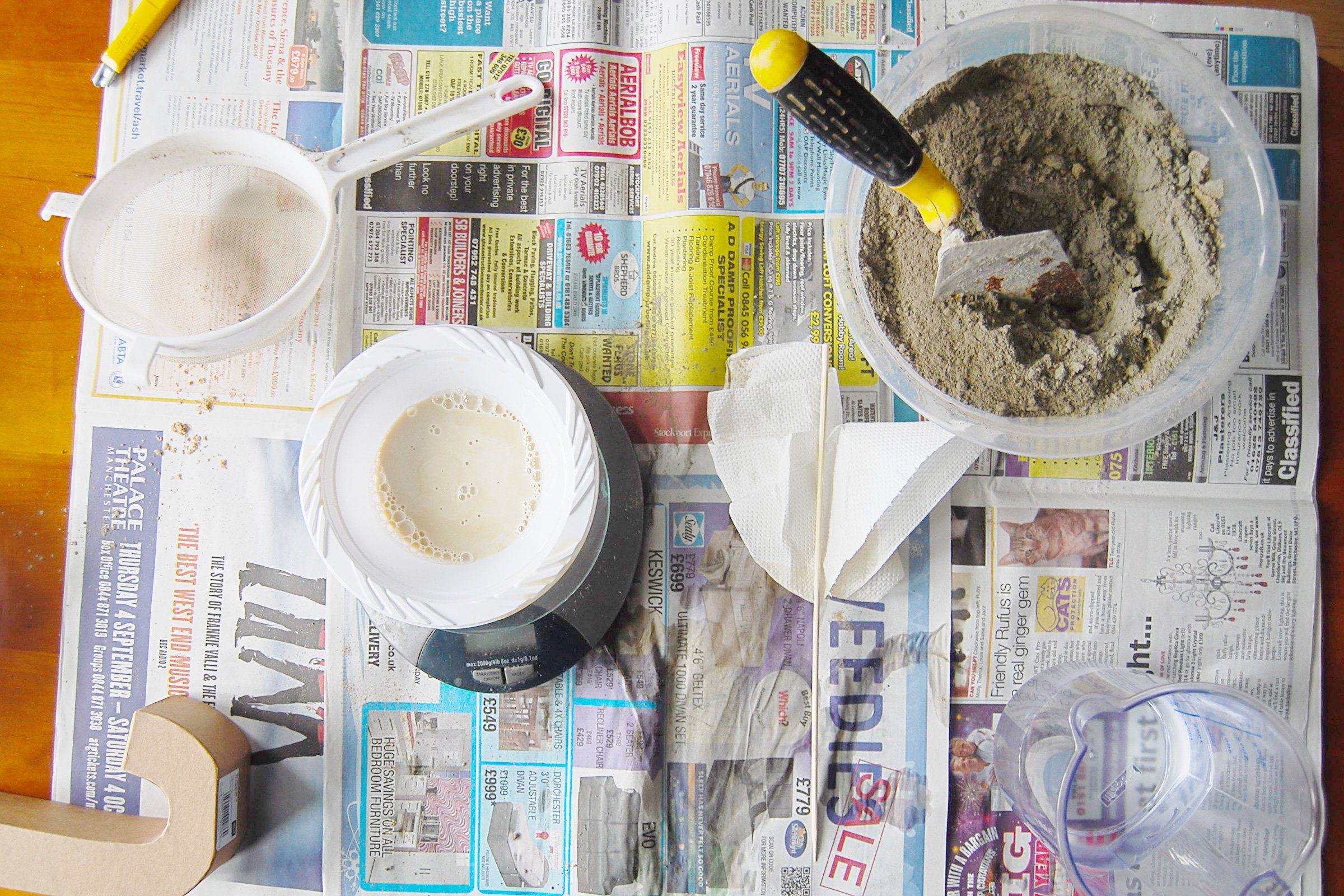 #4 Give your mould another spray with WD40. Then, using your trowel, fill the moulds with your concrete mixture. Make sure you really squash the concrete into the shape and that you get it into each corner. After filling it about halfway, tap down the mould a few times to remove any air bubble and make sure that the mixture distributes evenly. Another reason for mixing your concrete yourself, rather than using the ready mixed variety, is that you will have much more time to work with it before it starts to go off. You can really take your time and make sure that the mould is completely filled. When the mould is full, finish off by smoothing the surface with your trowel. 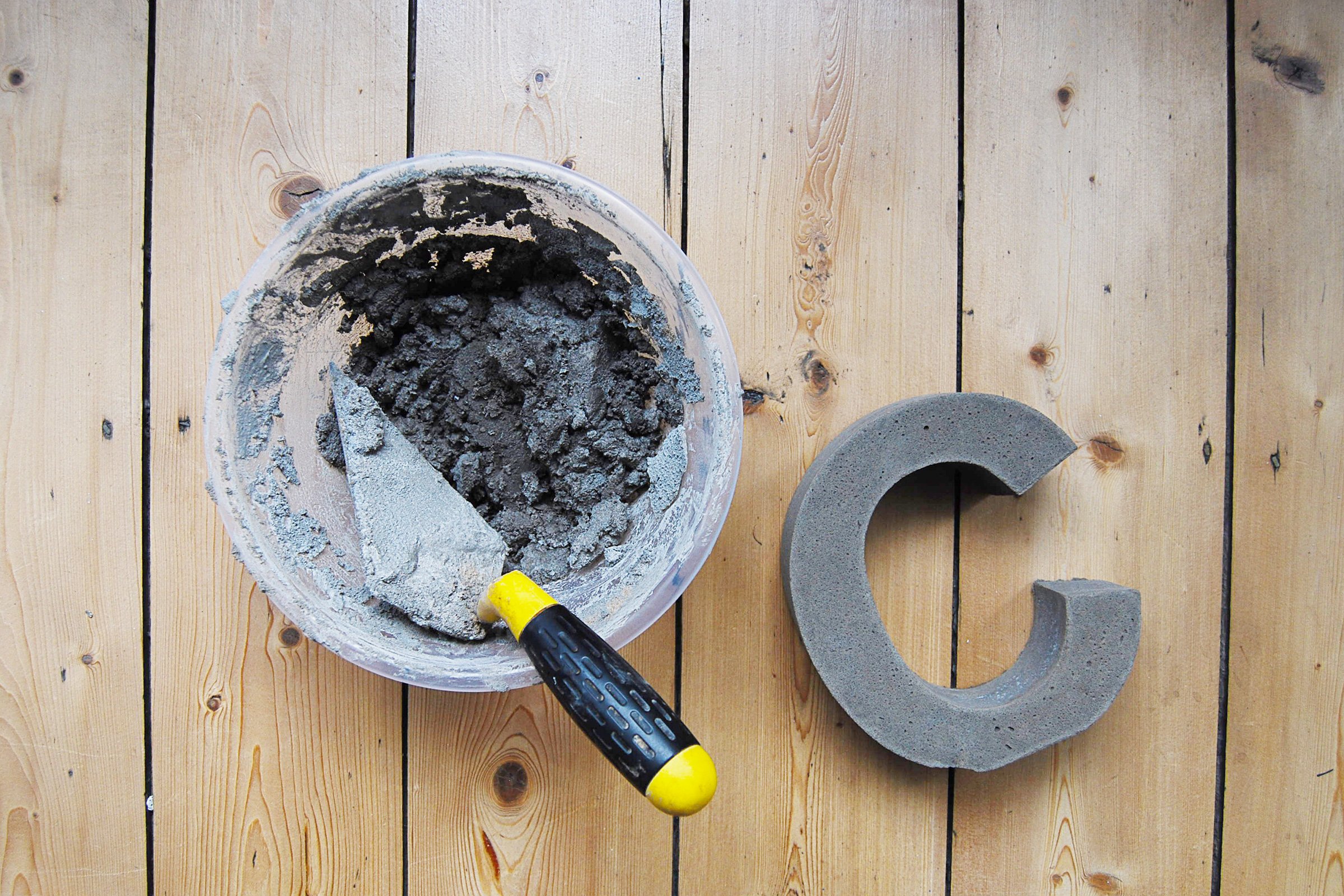 #5 The concrete needs to be shaken to remove any air bubbles. We obviously don’t have any professional concrete vibrating tools flying about our home, so came up with this really high tech solution – put it on the washing machine during the spin cycle. Seriously. I know it sounds bonkers, but it really works.

#6 Now for the hardest part of the process – don’t touch it! The concrete will crack otherwise. Leave it for at least 48 hours, but ideally, you will leave it for at least 60 hours. Then you can peel away the cardboard mould. Because of the coat of WD40 it should come loose pretty much straight away, but if not, just wet the cardboard mould and it should soften and easily come away from the concrete. Don’t try to move the moulds any sooner, as you will crack the concrete (trust me, we tried)!

#7 This step is optional, but because we were aiming for a really smooth texture, we finished off by giving both letters a sand with some fine sandpaper. 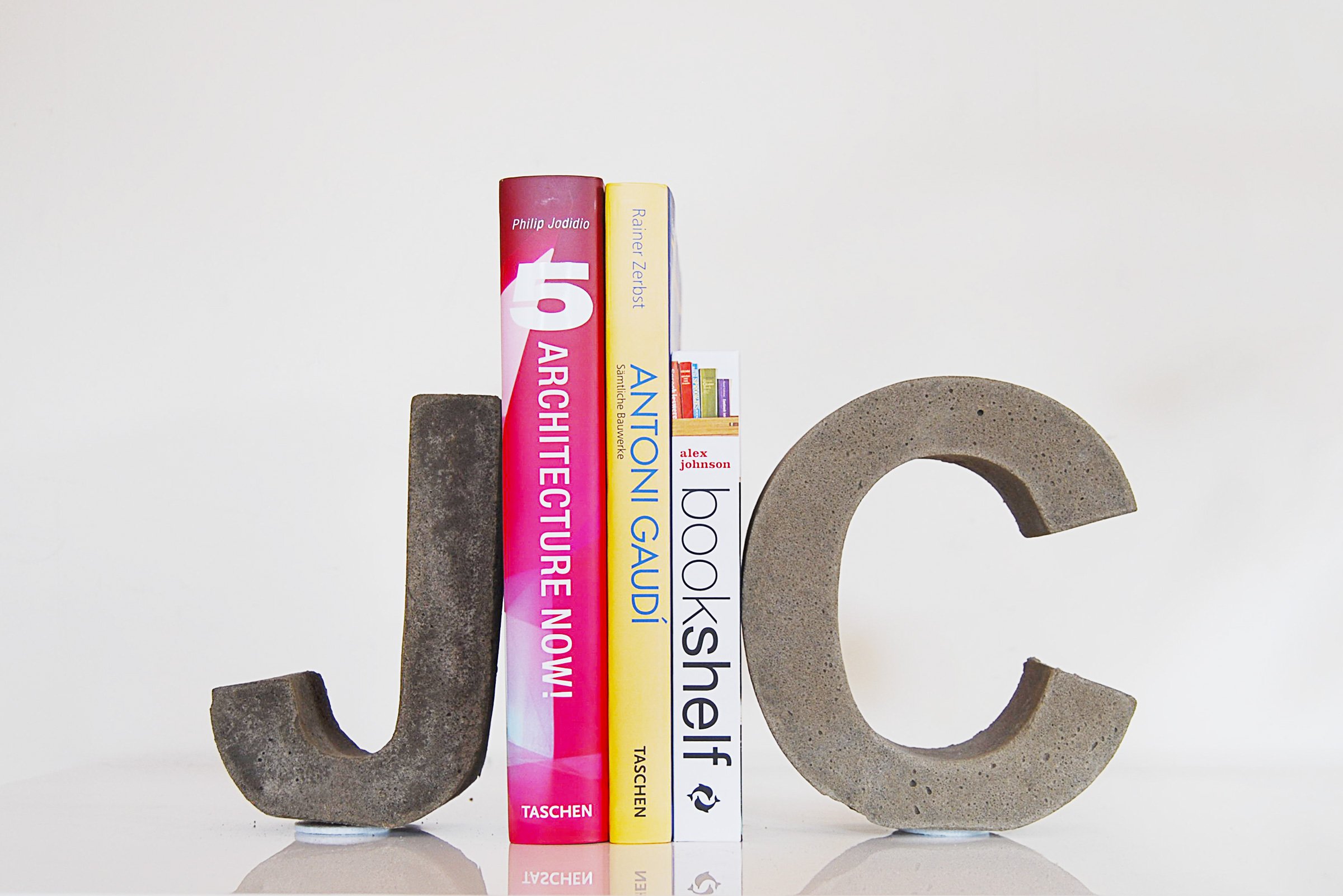 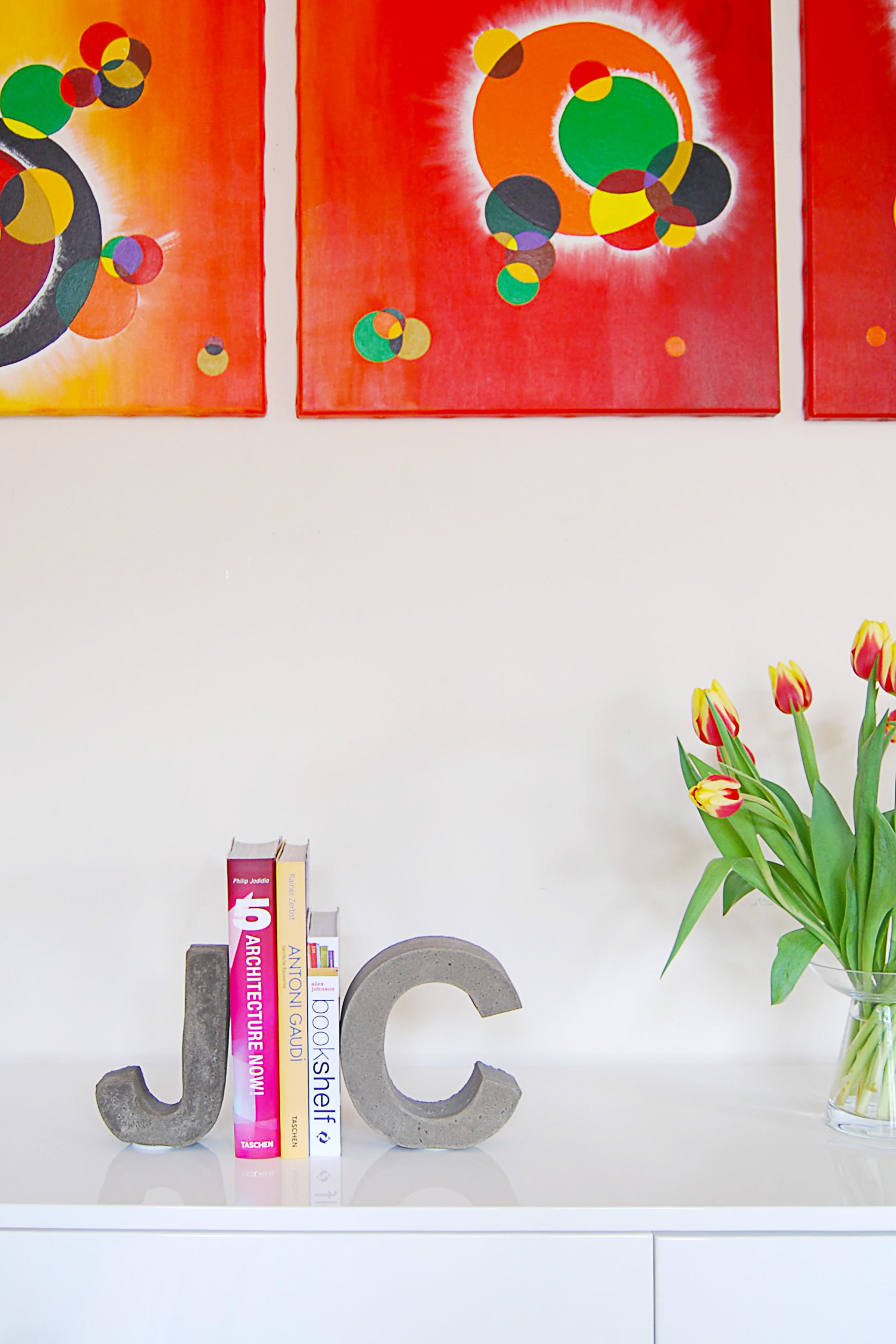 I know that it’s only a small concrete addition to our home, but this is only my first step of slowly introducing it. I love how these DIY concrete letter bookends turned out and already have a few ideas for some more projects using concrete. 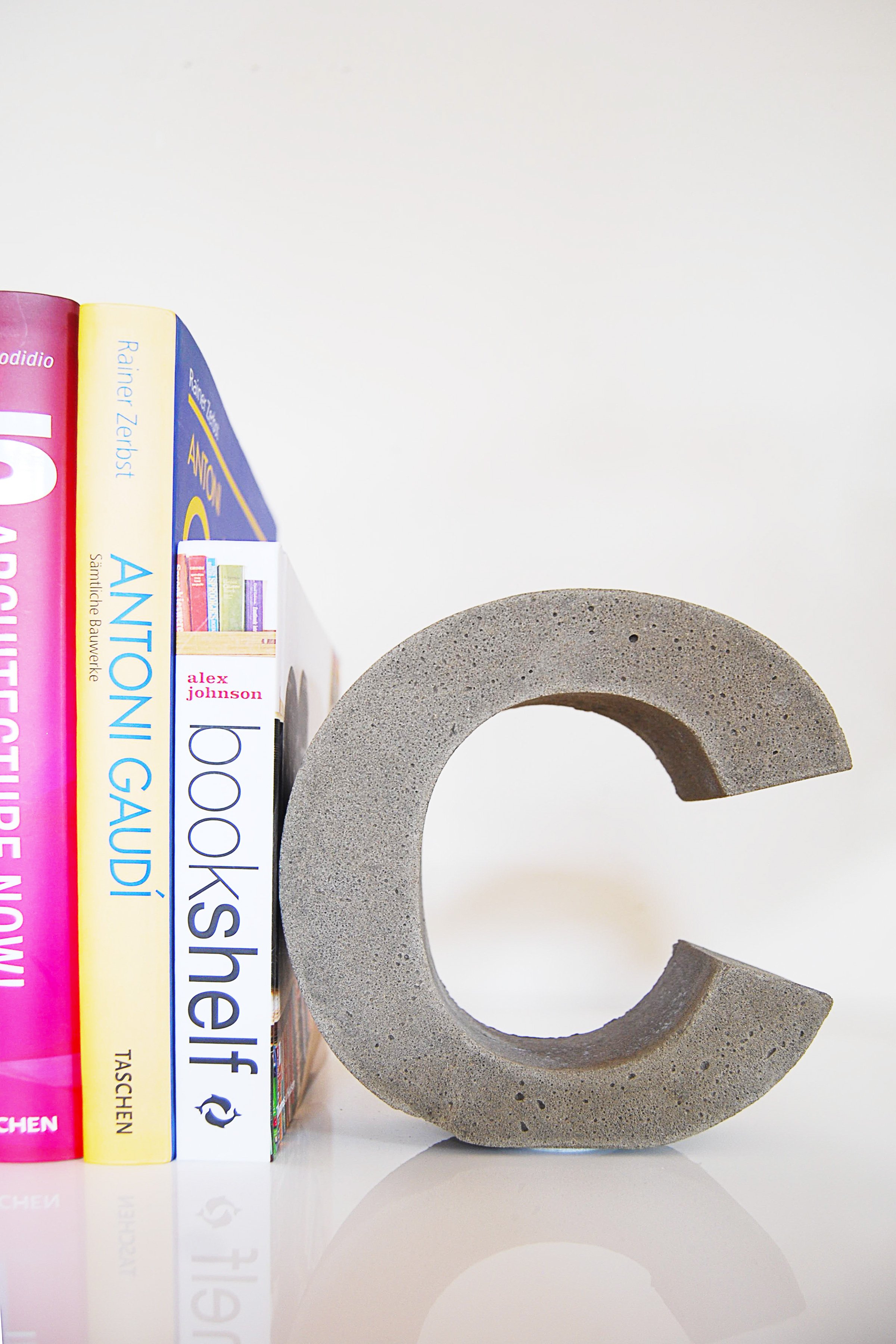 PS – It’s the Homies and we are nominated in the Best Home Project & DIY category. We already shamelessly told you about it here. But more importantly, you can vote for us HERE if you want, we won’t stop you or try to get in the way!