Okay, so I know that’s a totally ridiculous statement as it’s not like we’ve been living without one for the last 9 months but it has gone through such a transformation that it feels like it’s all shiny and new as it now looks like this! 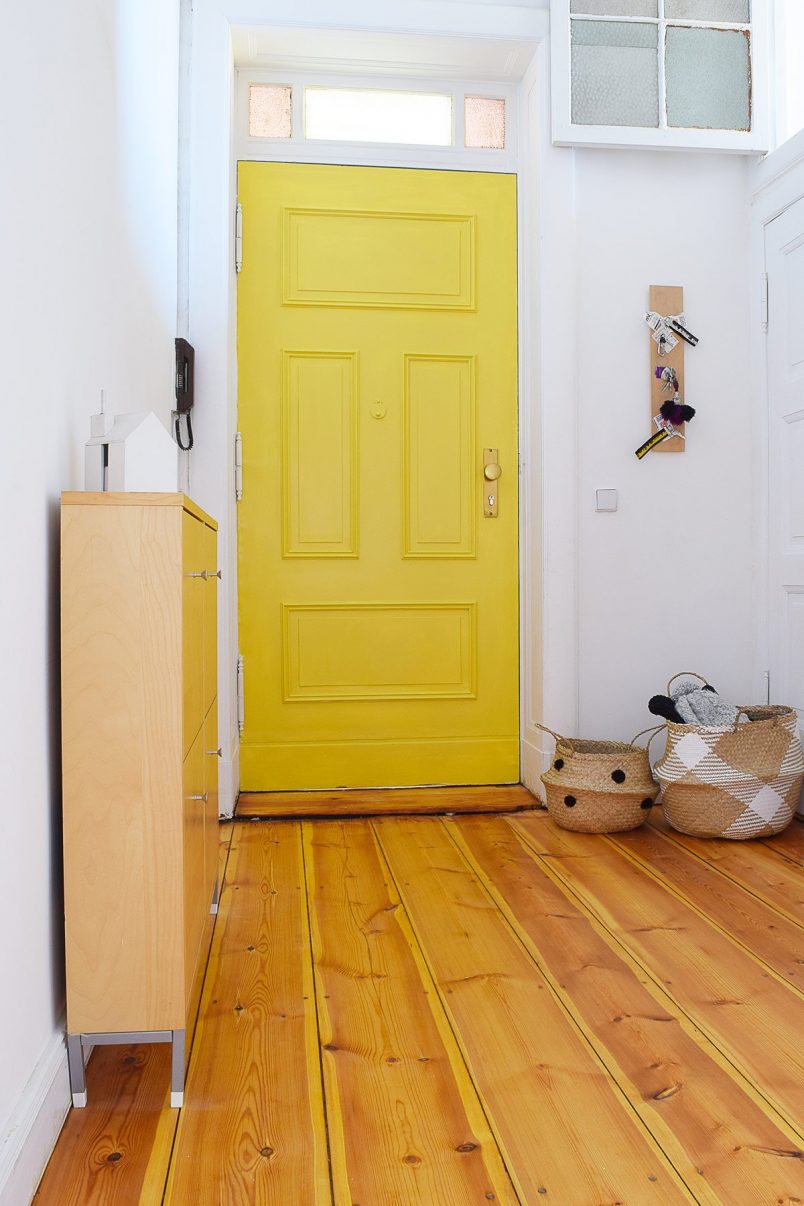 As we aren’t allowed to paint the outside of the front of the door we figured we’d at least have some fun on the inside.

The biggest change we made to our door, however, isn’t the colour, it’s the panelling – which is also the reason that it’s taken us almost 9 months to make a decision on what to do with the door. 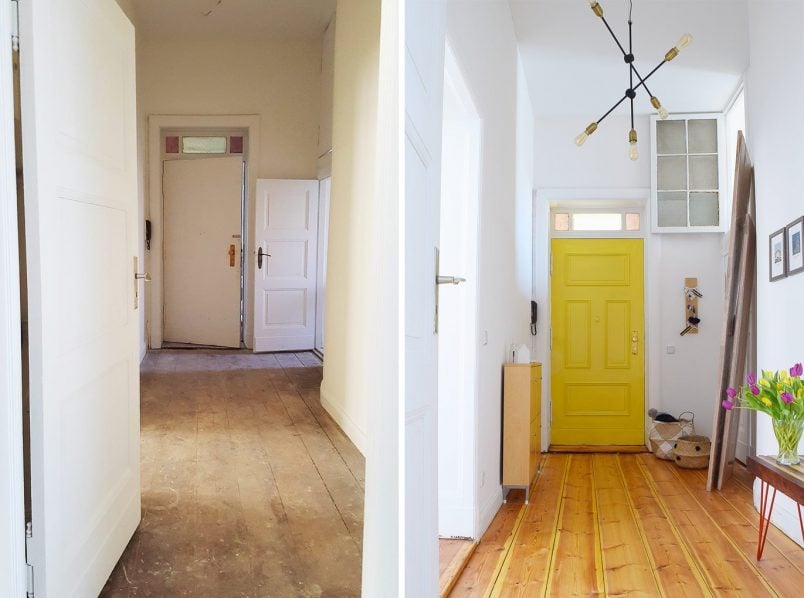 I know this sounds like we overthink every decision we make (and we probably do!) but this one was particularly difficult as the door had been boarded up.

You’re probably thinking “Why don’t they just remove the board?”. Well, we did in our last home and we almost did here, too but the reason the board is there isn’t a decorative one, it’s for security.

The original panels of the front door are, in parts at least, very thin so the board (it’s made of steel) covering the door serves as a strengthening barrier and will stop anyone kicking the door down. 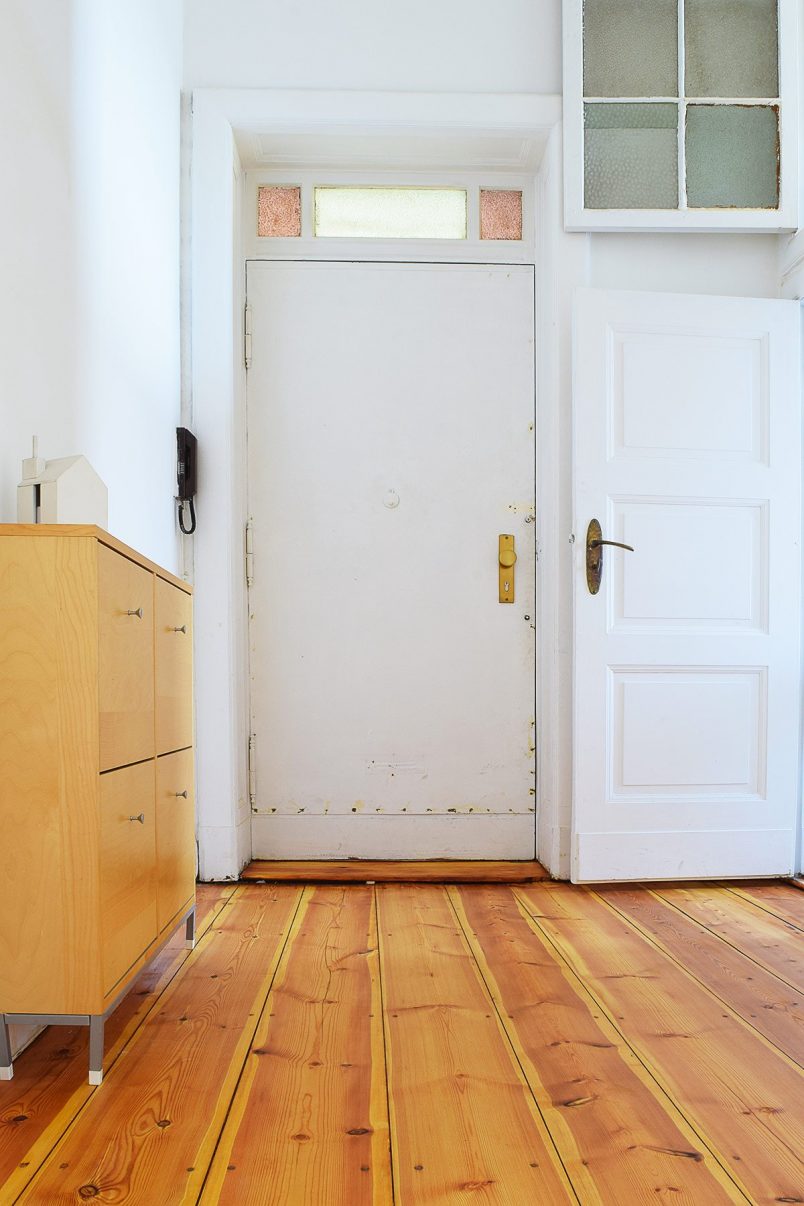 Although I think that it’s really unlikely that it would ever happen, it would probably be mad to remove any kind of security feature which is why we ultimately decided to keep it – although I’ll admit that I changed my mind about 20 times!

As you can see, we didn’t leave the door completely flat and bland though as we added panelling on top of the steel board!

It may not be quite the same as having lovely original features but it definitely makes the door look more in keeping with the style of the rest of the apartment.

The front door already looked much better after attaching the outer panels which are moulded timber strips that I cut to size with our mitre saw (you could use a fine saw and mitre box) but we wanted the door to match the style of our other doors which is why we also added flat rectangular panels (made out of 3mm HDF board) in the centre of each panel, too. 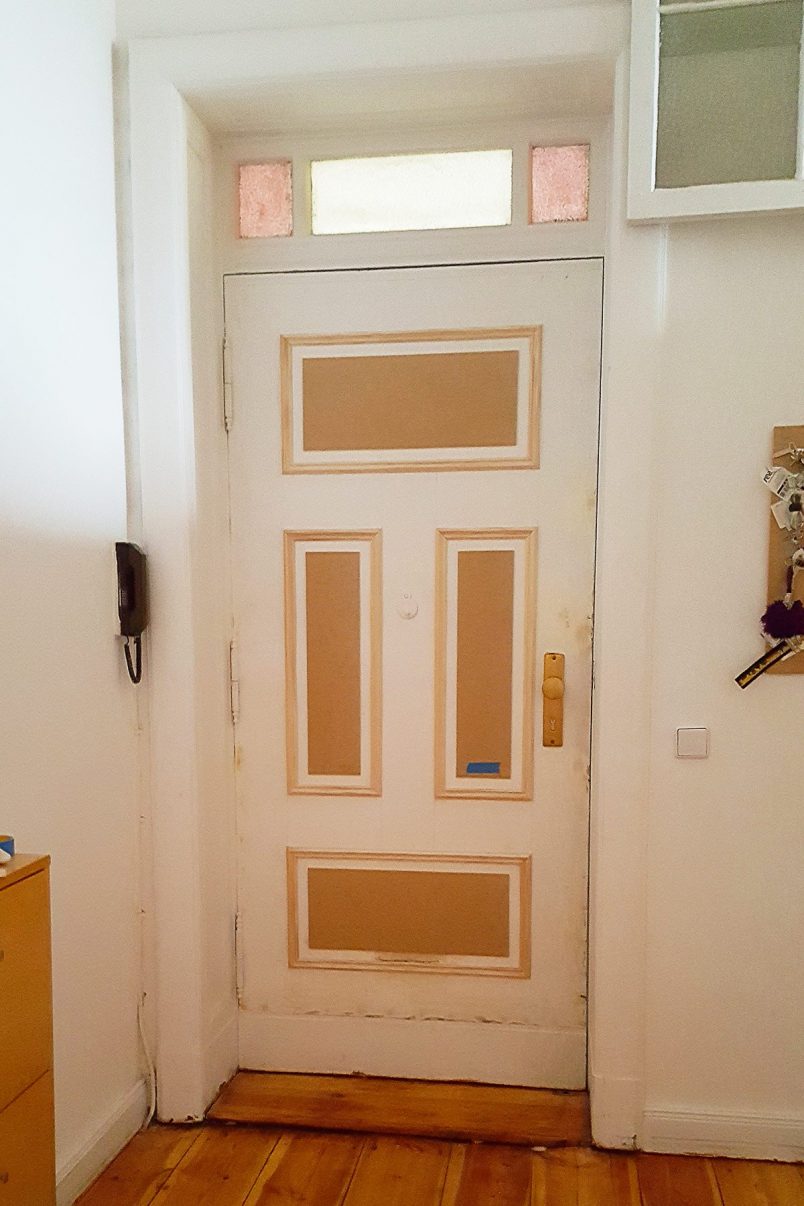 Given that we had to attach the timber moulding to the steel sheet, we obviously couldn’t nail them in place so just glued them to the door with some super strong adhesive. 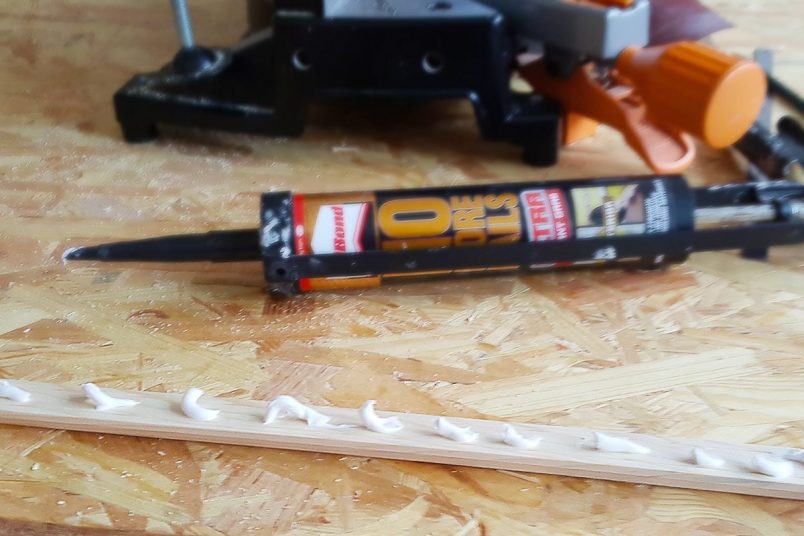 A bit of filler and caulk later, you really wouldn’t know that the panels hadn’t always been there.

As always, choosing a colour turned out to be the most difficult part of the project and if you follow us over on Instagram (you totally should be!) you’ll already know that I had more than just a slight wobble when it came to our colour choice! I was just so indecisive and there are just way too many amazing colours to choose from! 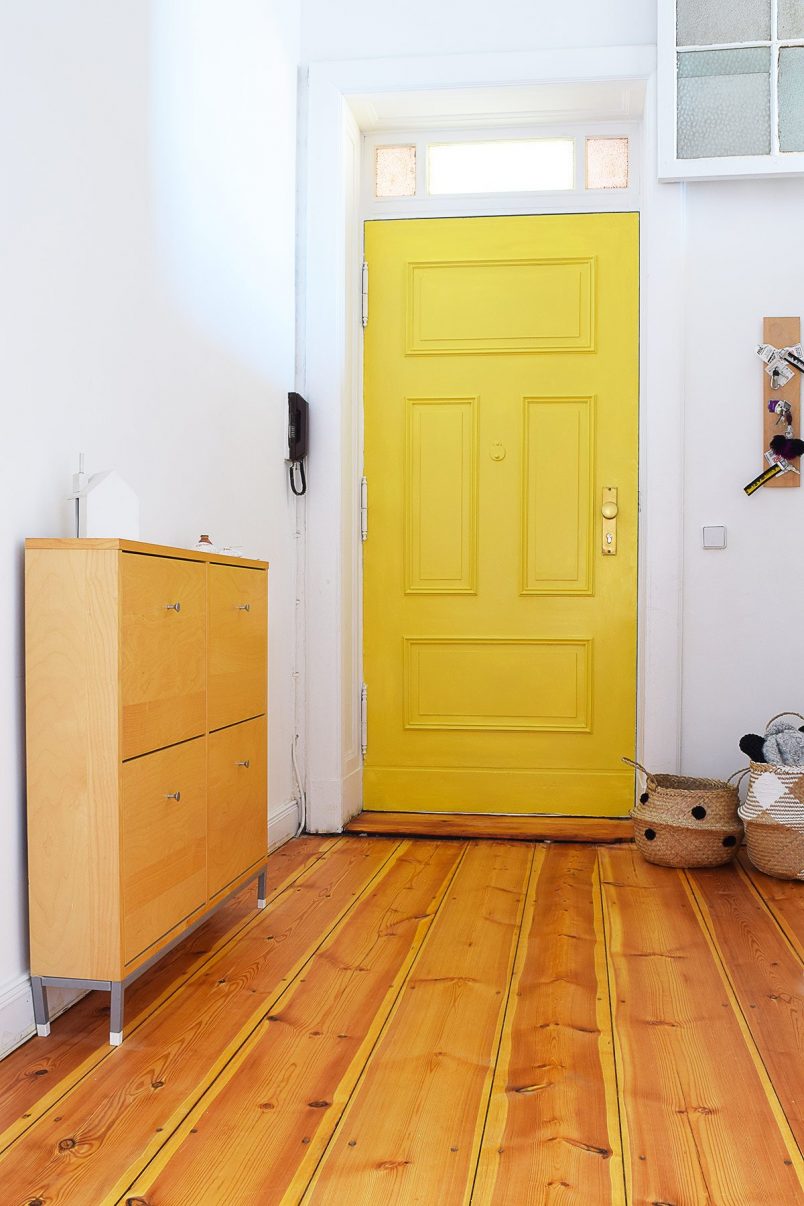 But choosing a colour in our hallway is really difficult as there’s almost no natural light. We wanted something colourful and vibrant enough to cope with the low light conditions which definitely turned out to be more difficult than expected.

We originally started to paint it a lovely pale blue (you can read about the colour scheme plans for our whole apartment here) but decided that it just wasn’t vibrant enough to cope with the low light conditions – even if it was called Pale Berlin! 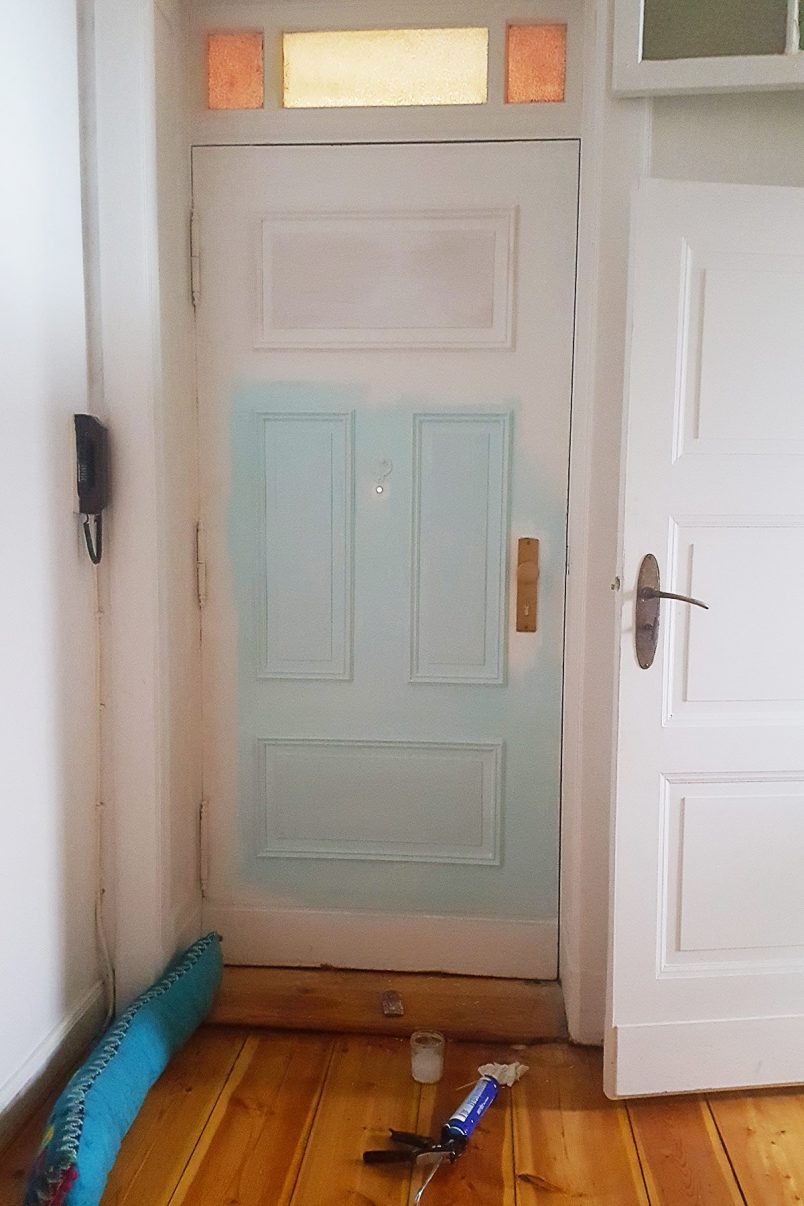 In the end, we opted for Babouche by Farrow & Ball. It’s a really lovely vibrant shade of yellow which still has a lovely warm feel. It’s super colourful and works really well in our otherwise bland hallway.

The colourful front door already goes a long way towards making our hallway more inviting, even if it is still a really bland space (you’ll have to excuse the new worktops balancing against the wall – they were just too heavy for me to move on my own before taking the picture). 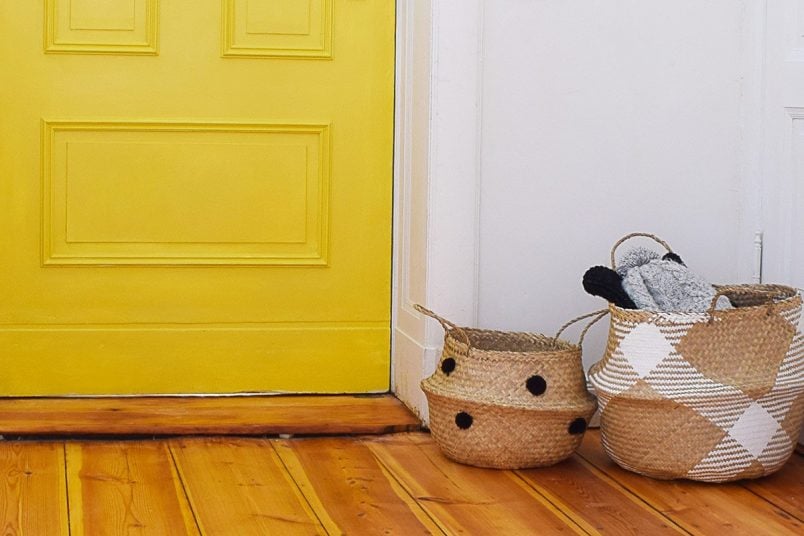 Our sanded and oiled floor, as well as the new molecular light fitting, are already a huge improvement but my favourite feature in here – apart from our newly painted front door, of course – is the curved wall (just behind our new worktops) which we’d somehow like to enhance but I have no idea just how yet. 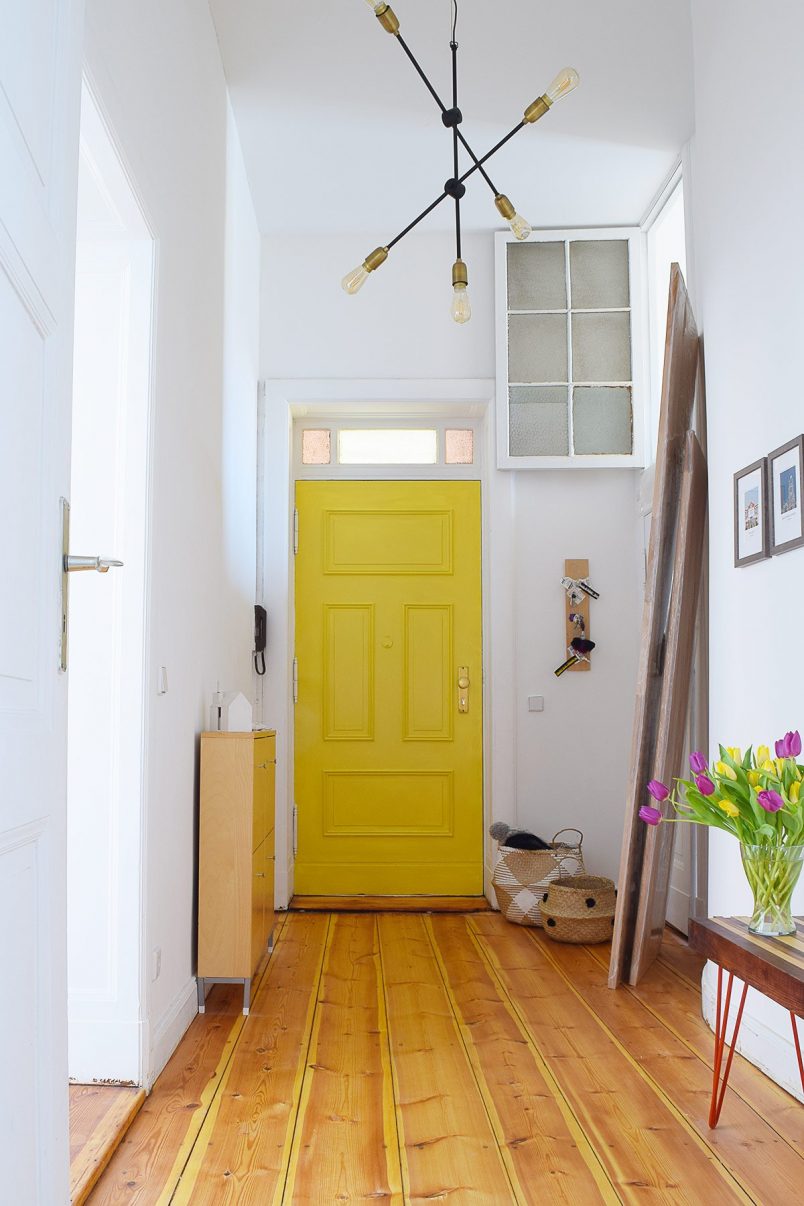 I totally admit that I’m not sure if we’ll keep the colour forever. I do like it now that it’s done but we might change it when we get round to sorting the rest of the hallway.

What colour is your front door? Do you think we were right to keep the steel plate and fake the panelling? Do you have any suggestions on what to do with our curved wall?

PS. We changed the colour of the door again and added a gorgeous wallpaper mural. Click here to see what our hallway looks like now!