We’ve completed our first makeover and we’ve given our previously yucky pantry a much-needed (and kind of accidental) DIY pantry upgrade!

It may not look too bad in the photos but you’ll just have to trust me when I say there was no way I could even think about putting food in there before giving it a serious clean. 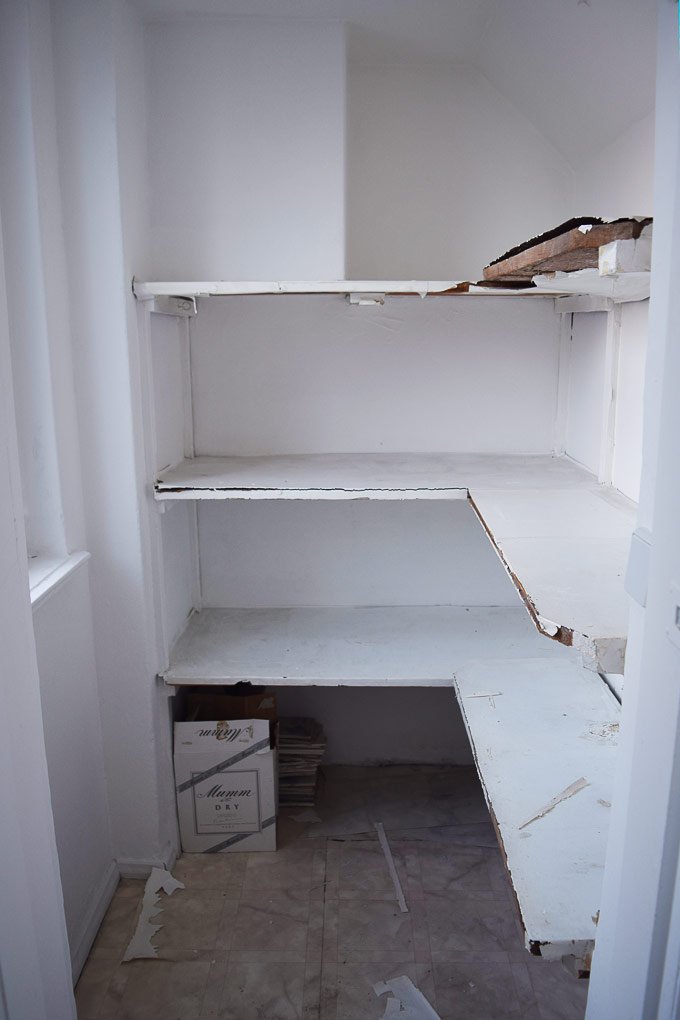 Not only was it dirty, everything was really sticky and the smell, which became even worse when I started cleaning, made me gag.  At the moment, all of our improvements aren’t big changes, they’re small updates that aren’t even necessarily permanent, they’re improvements that are all about making our apartment work better for us.

I also didn’t want to spend a huge amount of time or money on the pantry. It’s a great room to have but it’s a room that we’ll lose when we change the layout of the apartment (you can read about plans for moving the kitchen here). 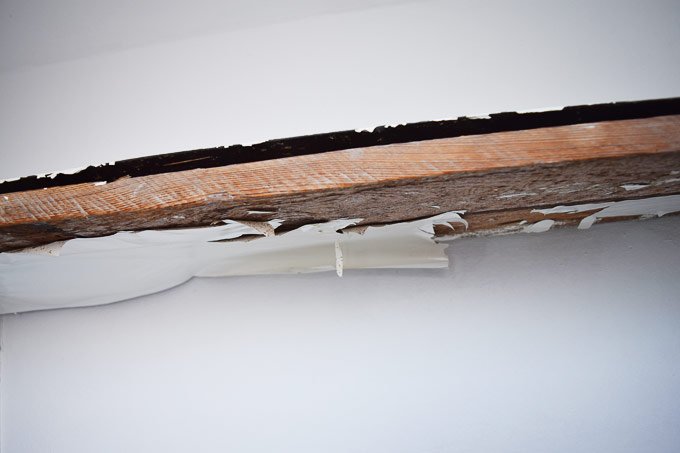 After spending a lot of time cleaning I still decided there was no way I could live with the room as it was. The foil covering the shelves was still dirty, still flaking and really sticky and even after my best cleaning attempts the room was still covered in stains and just felt dirty. 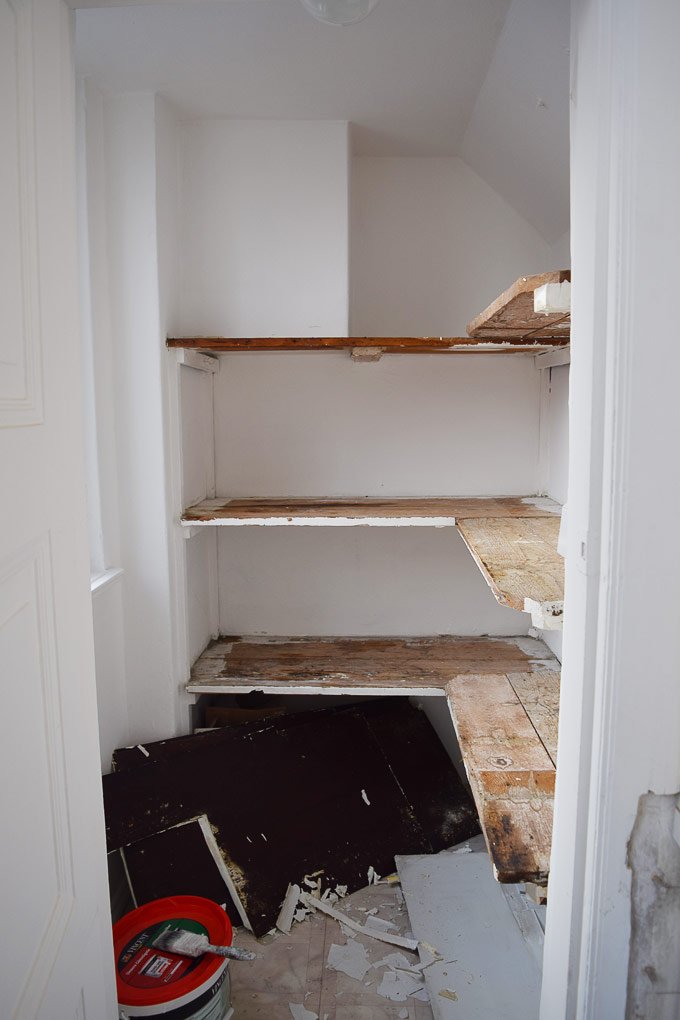 The main problem were the wooden shelves. Even after stripping the flaking foil that was covering the shelves the room didn’t look much better.

I tried painting them as a very quick and very cheap fix but as soon as it dried the paint discoloured and it almost looked worse than before. 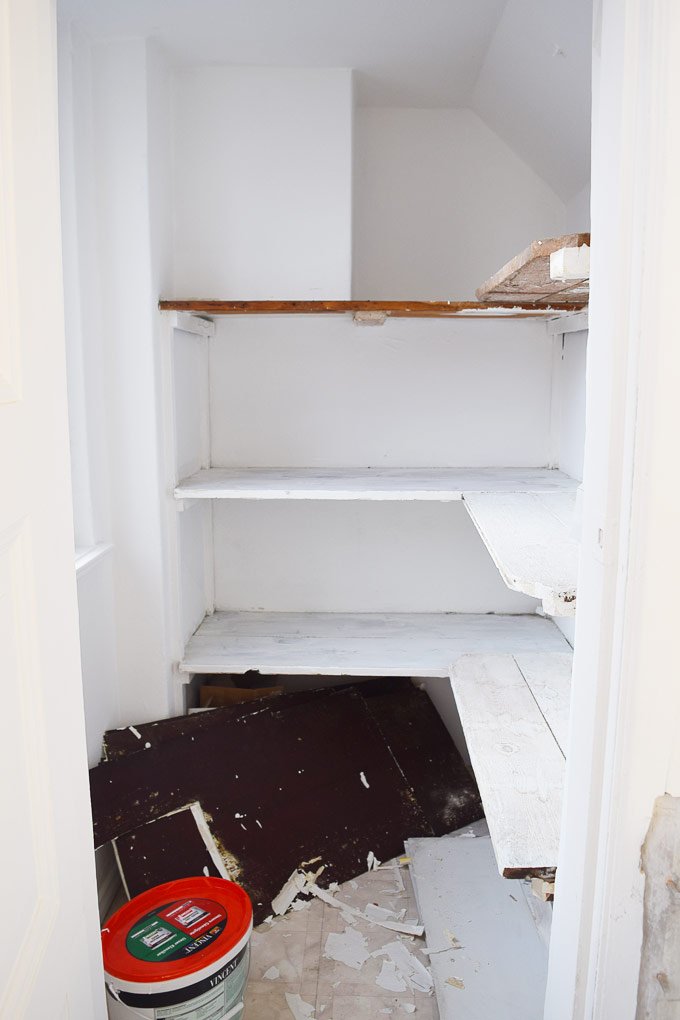 There was obviously no way the room could stay like that!

Then I tried covering the boards with a white sticky back sheet similar to the kind that had been there before but even after cleaning (and painting) the timber boards they were just too rough for the plastic to stick to. 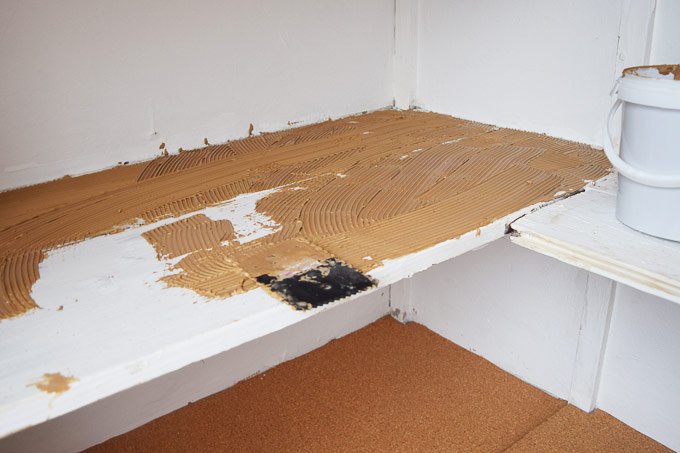 In the end, I opted for a cork covering and it turned out that this was the best thing I could have done!

The cork works so well as it’s slightly soft which means that none of our storage jars can slip. It’s also really quiet when you place anything on it. The cork we used is actually a roll of floor insulation cork and it’s only two millimetres thick which means that it’s really easy to bend over and glue to the edges of the shelves. 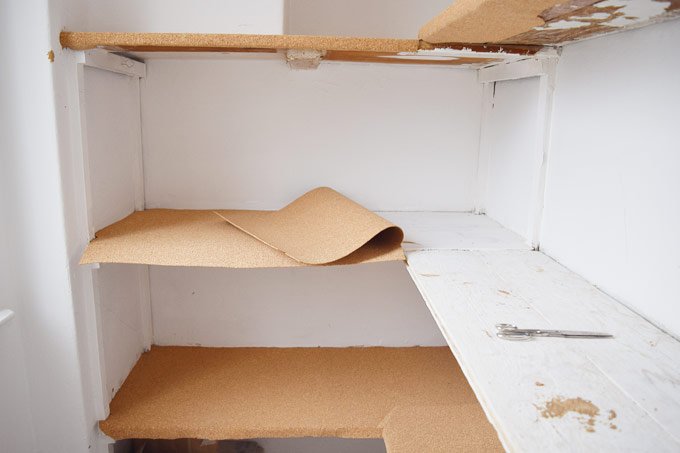 To attach the cork we used a tub of cork glue that we spread across the shelves with a tile adhesive comb. It’s super sticky and quite thick which means that it even sticks to rough surfaces like our timber shelves. Because both the glue and the cork are thick they also compensate for any unevenness in the shelving boards. 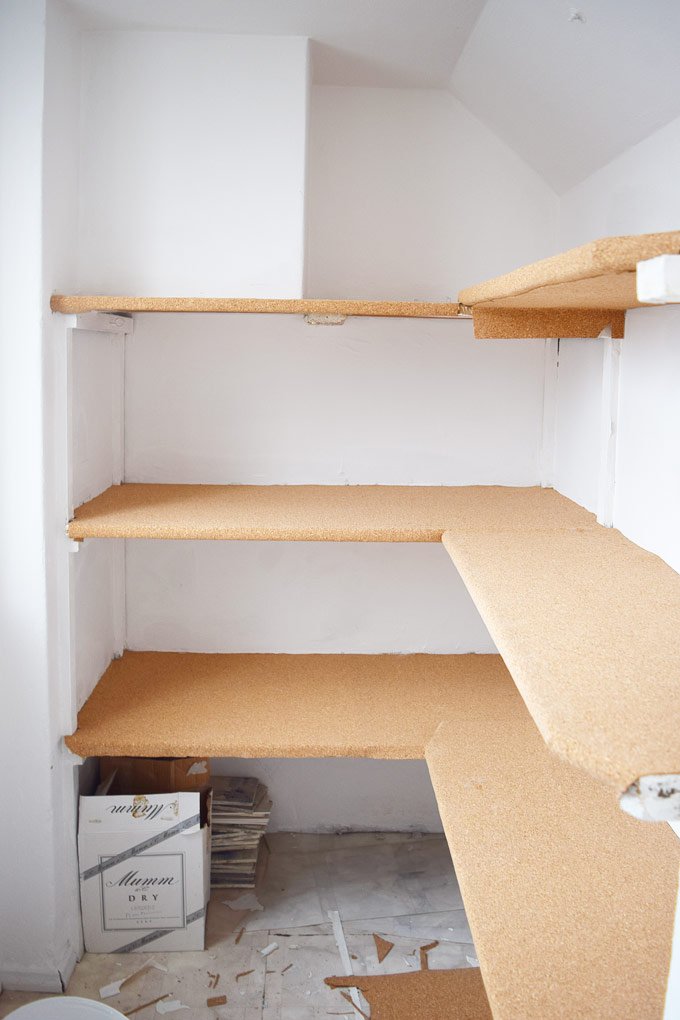 Given that using cork to cover the shelves was a total accident and nothing we’d planned, I really couldn’t be happier with how our DIY pantry upgrade turned out. Sometimes it’s the quickest and easiest projects that make the biggest difference! 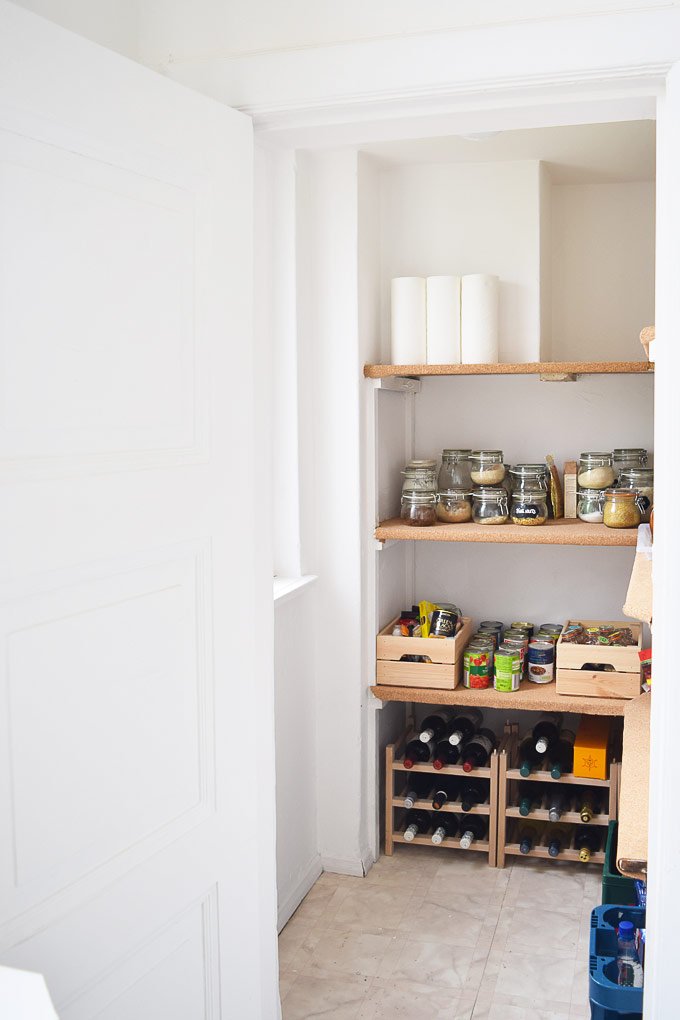 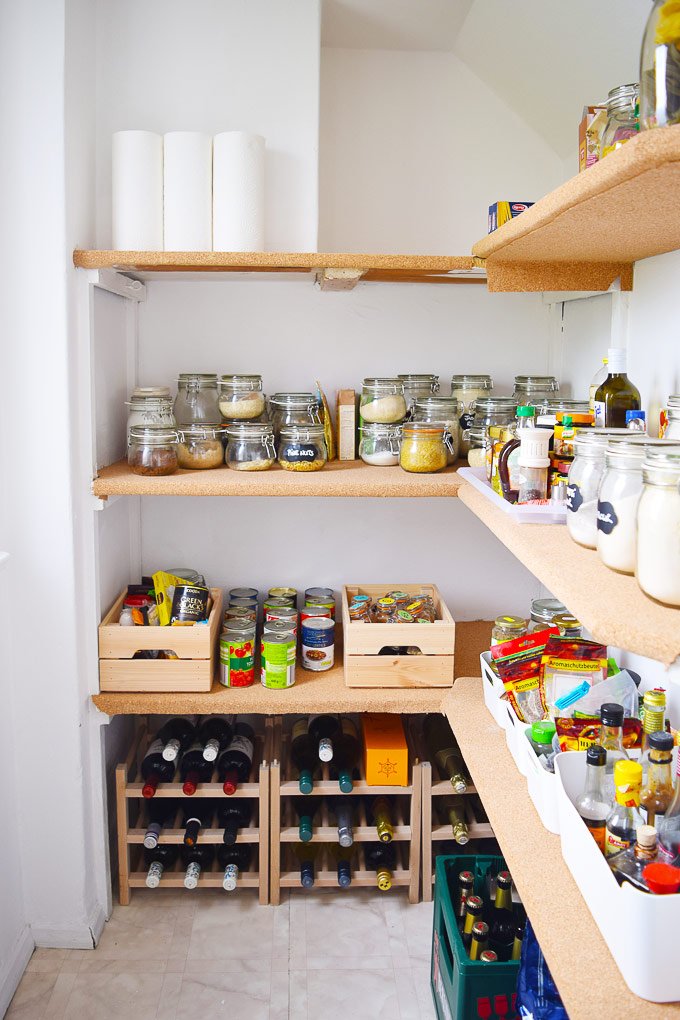 There’s no denying that it’s still not perfect but it’s so much better than it was before. We’ve never had a pantry before and I’m still a bit surprised at how well it works. Yes, you have to go into another room to get all of your food supplies but it’s also great to have everything in one place and immediately be able to see if you’re running low on something.

We also still need to come up with a better solution to store our wine. We used to store in the cellar but the storage room we have is really warm so there’s no way that wine would keep for more than a couple of weeks at the very most down there. 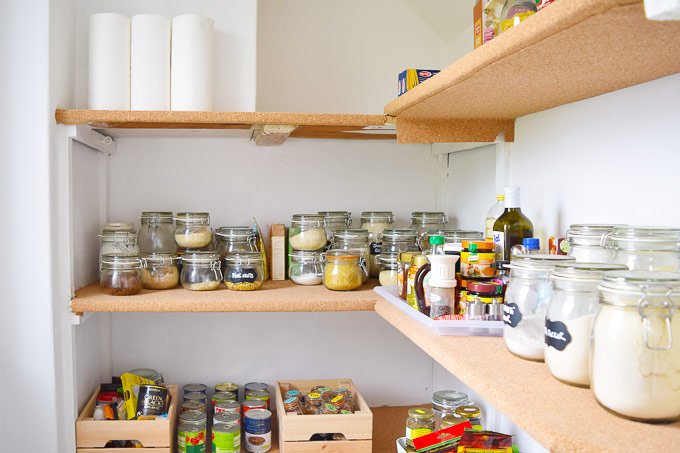 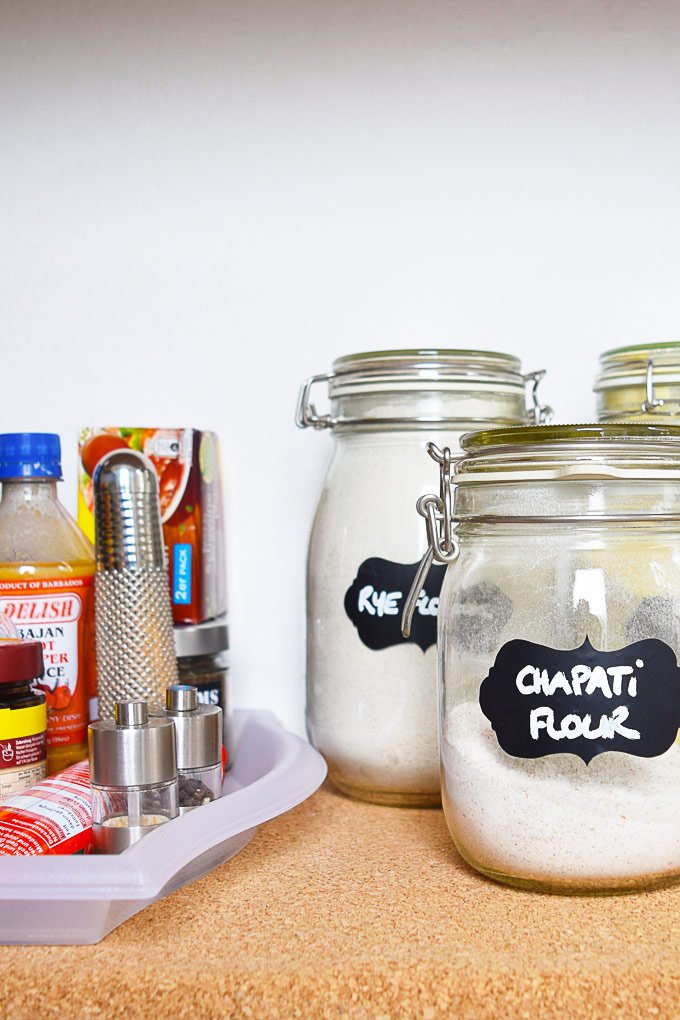 Have you ever tackled a project that turned out better than you’d expected? Do you have a pantry? What’s your favourite way to store food?