Budapest has been on my wishlist of places to visit for a long time and after reading Karen over at Well I Guess This Is Growing Up’s blog where she shared a great post about her and Joe’s Budapest travels we finally took the plunge and booked ourselves a long weekend away.

For the last few years we’ve been making an effort to travel more and although February doesn’t necessarily seem like a typical time to travel, we try to take a short break around this time of year as it’s our anniversary. This year we’ve been together for 13 years – yikes!. (You can read about our previous February travels to Paris here and to Hamburg here).

We already know we’ll be travelling much less after moving into our new home (for both financial and time constraint reasons) so this was a perfect quick getaway – after the last stressful home buying weeks but before the DIY chaos kicks in again! 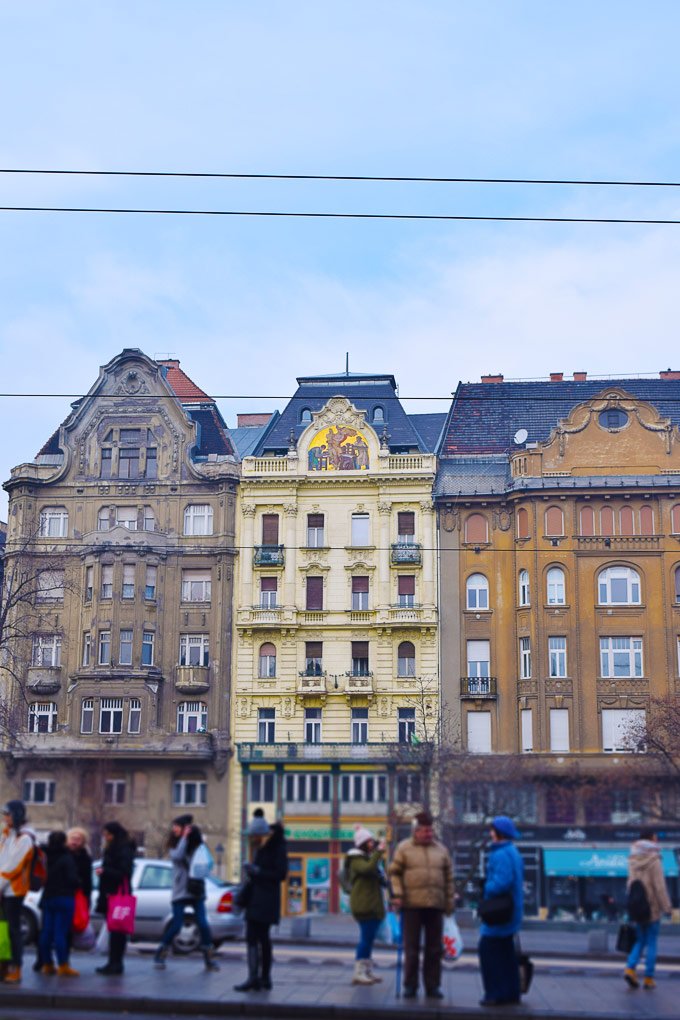 We’d heard amazing things about Budapest and had high expectations. Luckily we weren’t disappointed! It’s such a gorgeous city with breathtaking architecture, amazing street art and loads of fun places and bars to visit. None of our photos even begin to do it justice! 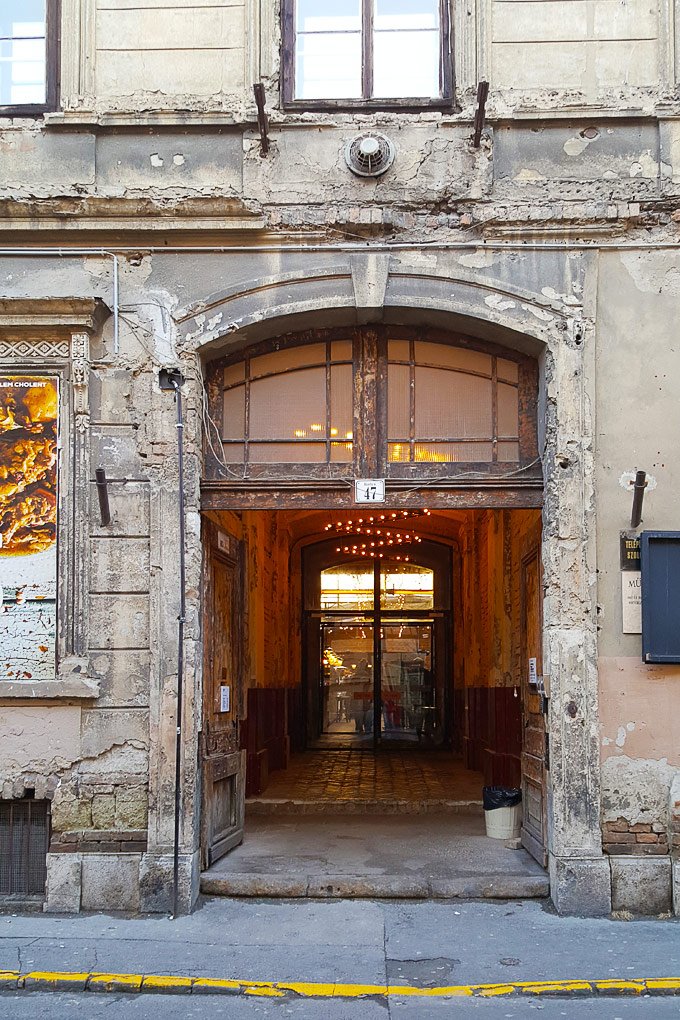 I was a bit worried about the weather. Yes, it gets a bit nippy here in Berlin during the winter say the least but Budapest can still be quite a bit colder! We were really lucky though and it was lovely and warm (if you can call around 5°C warm) and super sunny for the whole trip. 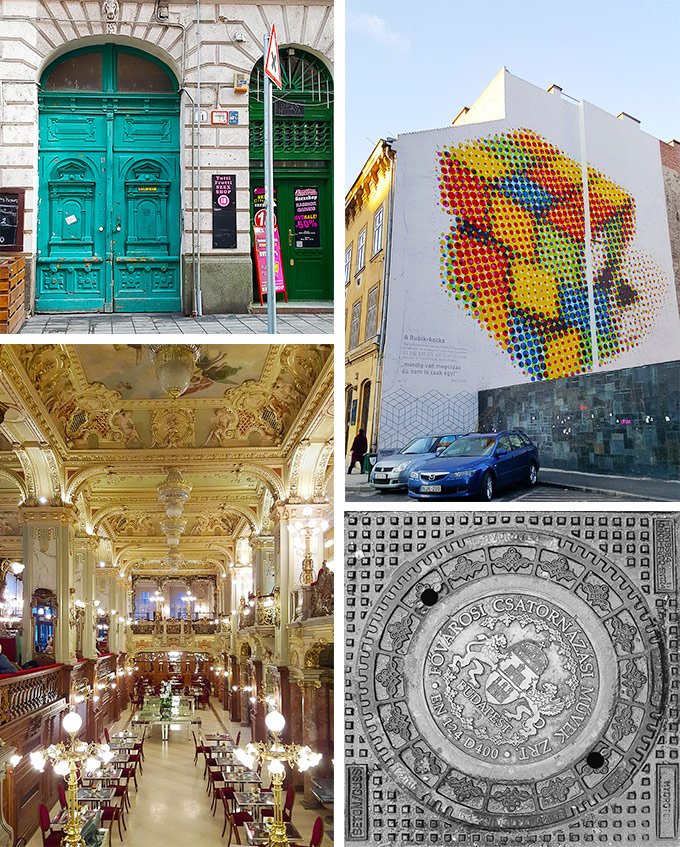 By total coincidence, we met a couple of Hungarian guys the week before we flew over and got some amazing insider tips, recommendations of places to visit and typical Hungarian food to try. And try we did! 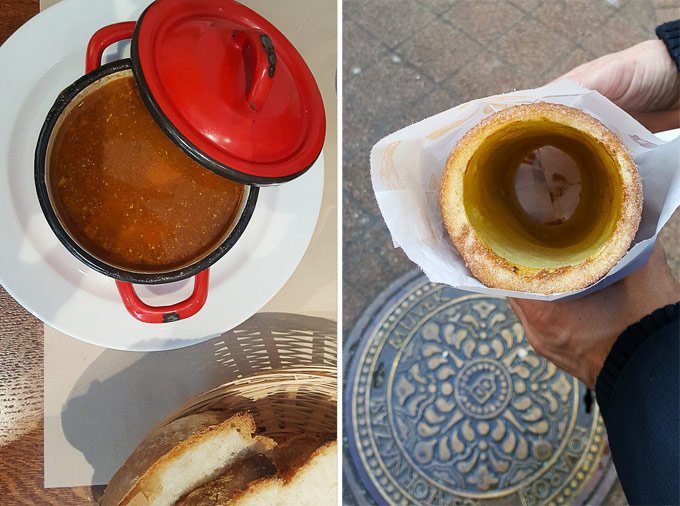 We tried everything from Goulash soup to chimney cake and Hungarian trifle. Oh and lots of Hungarian beer and wine, too. ;)

We spent a lot of time relaxing and didn’t do quite as much exploring as we usually would as Jan had a bit of an accident earlier that week while playing football (he ruptured a muscle fibre in his leg) which meant that he was limping for the whole time. At least he was able to ditch the crutches for the trip! 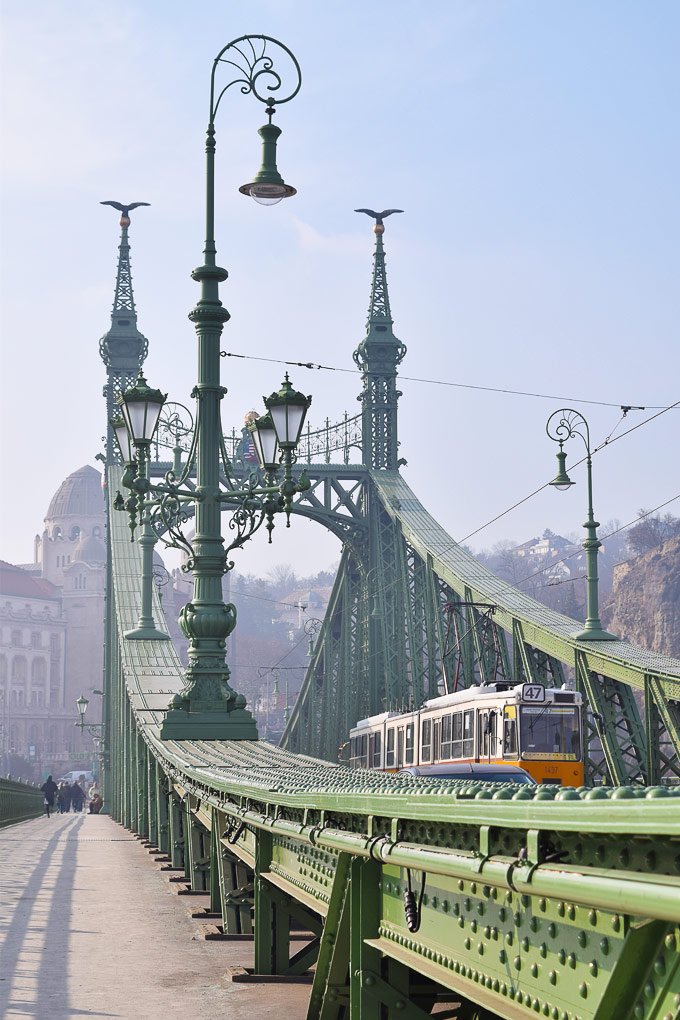 There are lots of thermal baths in Budapest and we spent a few hours relaxing in the Szechenyi baths. Apparently, the water has some kind of medicinal quality although I honestly just thought the water smelt a bit funky and metallic. It was fun lying outside in the hot water while it was barely above freezing, though. Weirdly, Jan is convinced that his that leg felt better after a soak in the water, so maybe there is some truth in it. 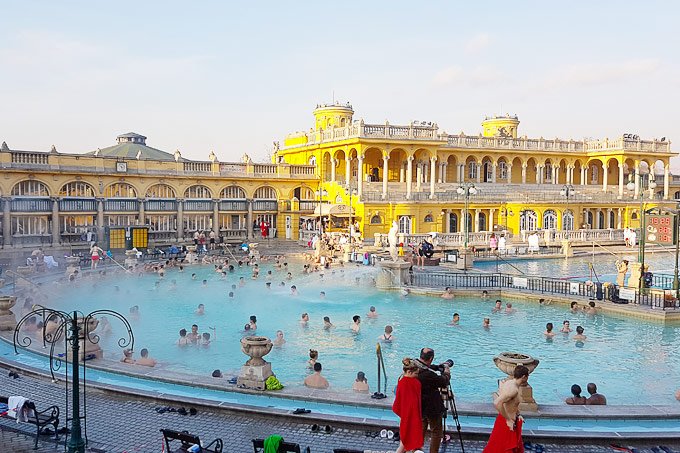 The hotel we stayed in was on the top of the hill in the castle district and we had the most amazing view of the river and parliament from our room. 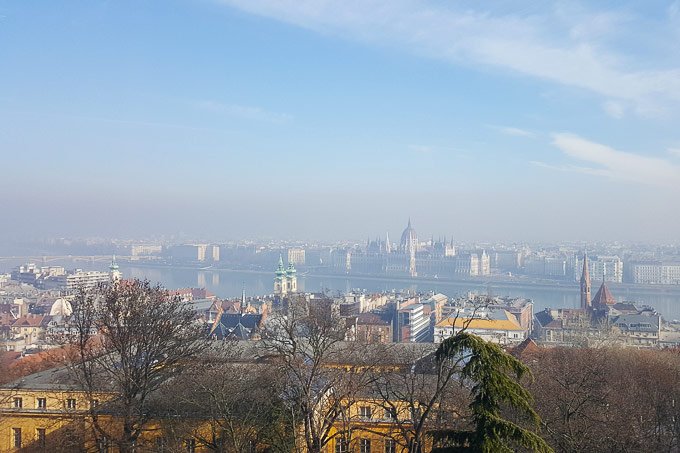 The Fisherman’s Bastion and Matthias church were directly next to the hotel and while having breakfast you could look out of the window and see the hoards of tourists climbing to the top of the structure to take pictures of the amazing Budapest skyline. 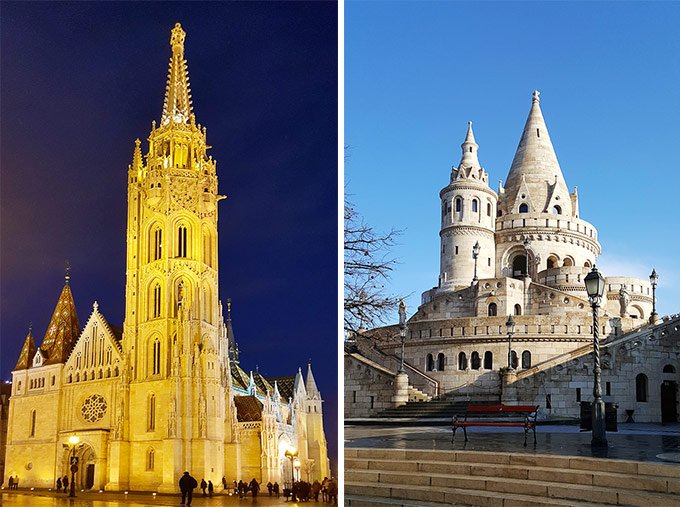 Isn’t the roof of the church spectacular? 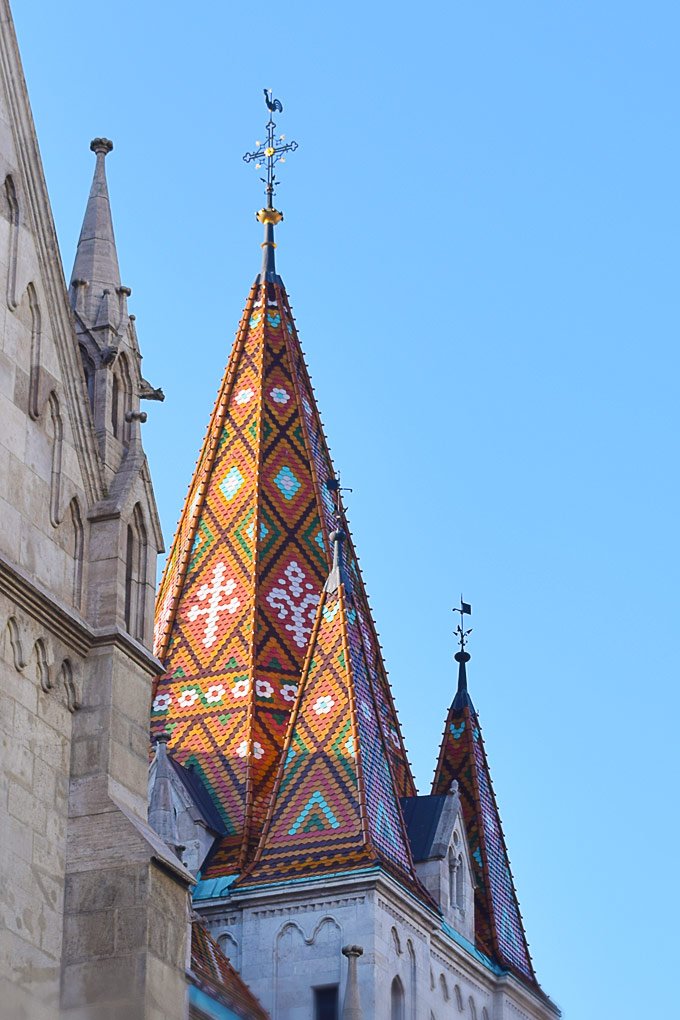 We also visited the Parliament and the Basilica bought paprika at the Great Market Hall and climbed to the top of Gellert Hill for a great view over the whole city. And we always made sure we were back for the cocktail hour at the hotel ;). 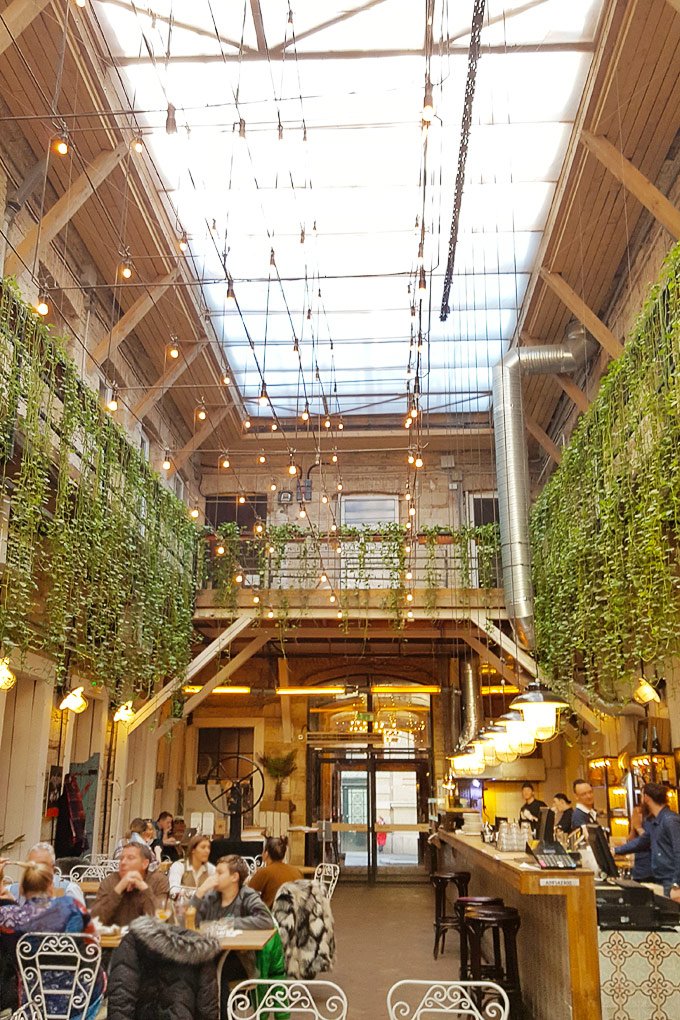 A must visit in Budapest are the ruin bars. We visited Instant and Mazel Tov which we both loved. Mazel Tov, in particular, had such a relaxed and funky vibe, good food and live music. Instant is definitely also worth a visit – where else in the world would you find rabbits flying through a courtyard directly above your head?! 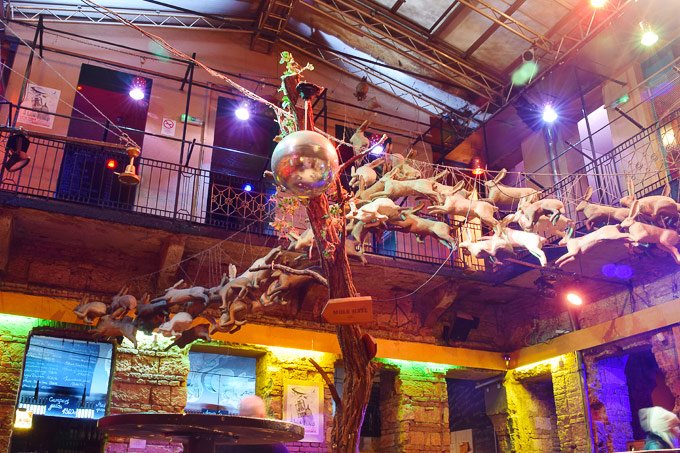 These are our Budapest Travel tips:

We’ll definitely visit Budapest again in the future! It was such a great city to visit and there’s still so much more to discover. Have you visited Budapest? What’s your favourite city for a weekend break? Do you have any sightseeing tips to share?