You might have already have seen a few glimpses of our new sideboard over on Instagram. It looks great – right? 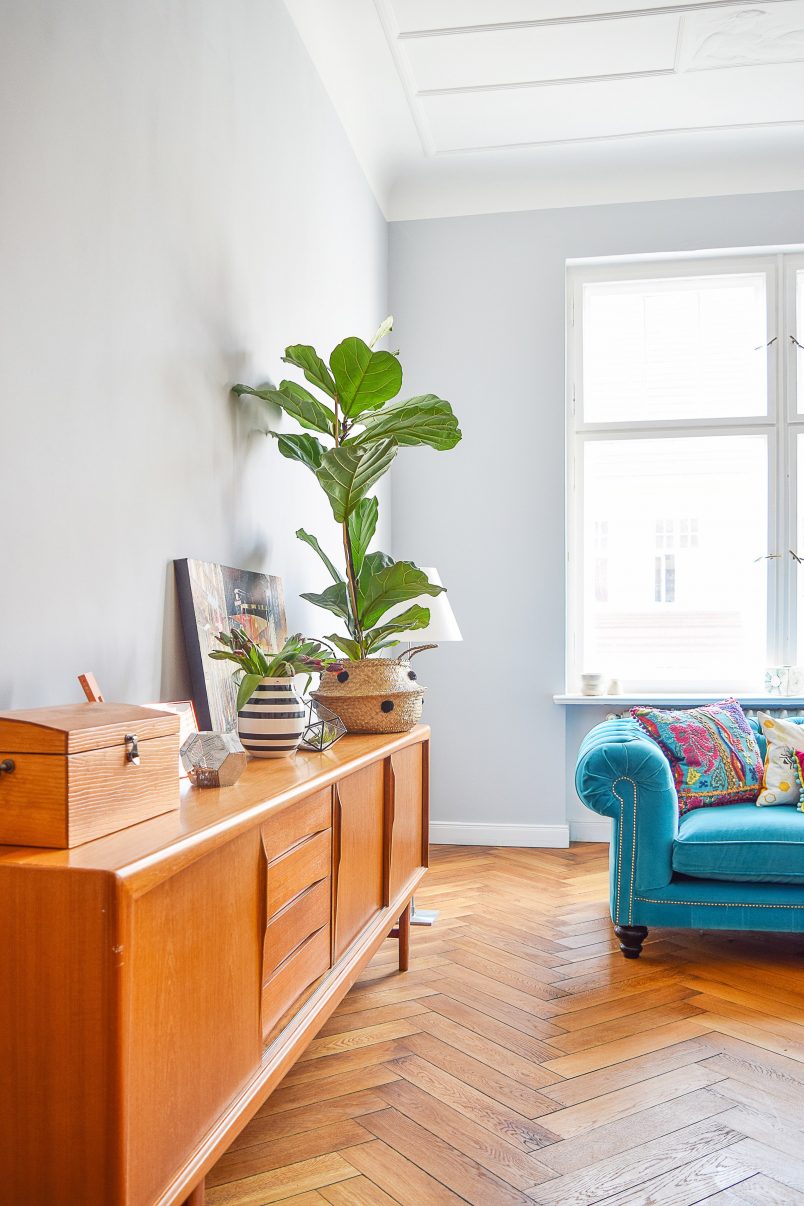 Well, I agree and we’re really happy with it but the buying process was so stressful that it’s taken me almost a year to be able to put the whole experience into words.

Seriously. It was that bad!

I got cheated, ripped off and threatened – which, let’s just say, wasn’t the most fun I’ve ever had.

To say that the experience was unpleasant would be an understatement. So, what on earth happened?!

Well, let’s start at the beginning.

I’d seen the perfect mid-century sideboard for our living room. It was for sale with a company located just a few minutes away and they would deliver. Perfect, right?

Well, as you can probably imagine, there was a slight problem. The price tag – it was a whopping 1600€ which was way out of our current budget. 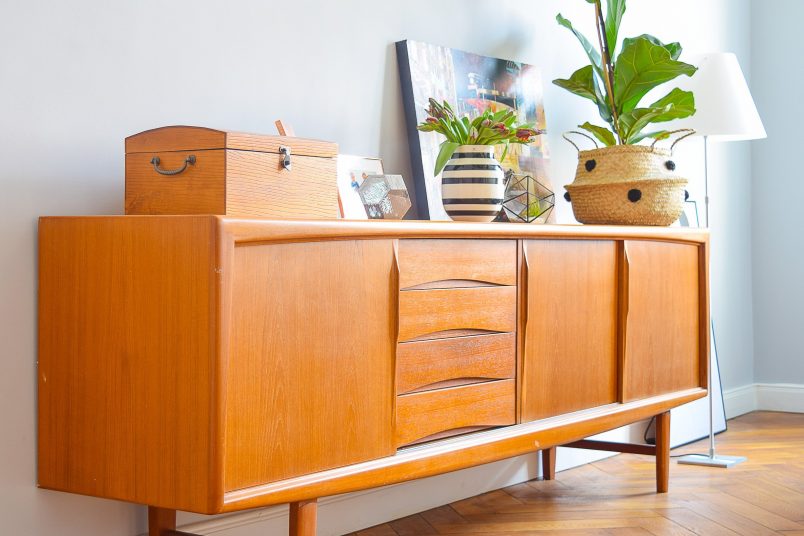 I quickly realised that buying used or antiquey furniture in Berlin is a lot more expensive than in the UK. So, as you do, I had a quick google.

And I was successful – I found the same sideboard on eBay for £600. The only problem was that it was in the UK. Don’t get me wrong, having large rooms is great but when it comes to buying furniture it can be a bit of a nightmare. And, when it comes to things like rugs, it’s pretty much impossible to find one that’s large and affordable. (Let us know if you have any tips on where to buy super-sized rugs!)

But back to our new sideboard. 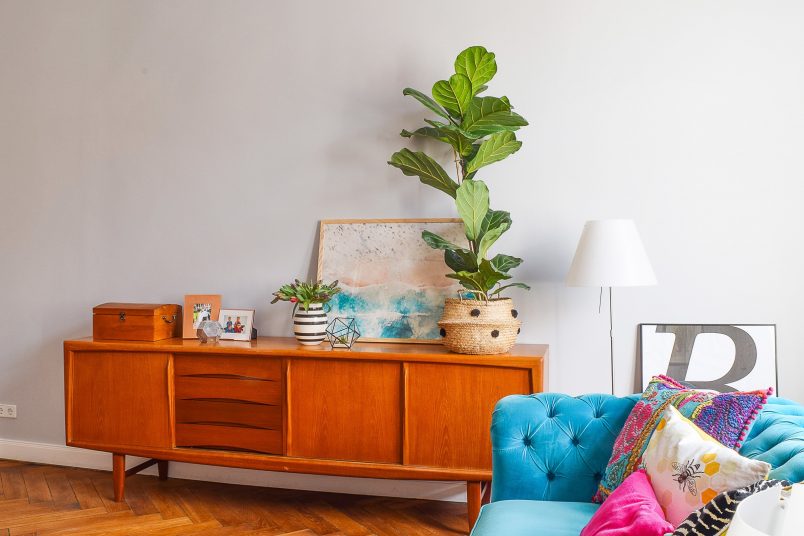 After a couple of emails back and forth, I managed to negotiate the price of the sideboard, get quotes for delivery and coordinate a pick-up in the UK and delivery to our home in Berlin at around 6 p.m a week later. So far, so good but that’s when the problems started.

On the day of delivery, I received a message from the courier saying he’d arrive about an hour later than planned which is why I asked if it would be possible to have the sideboard carried up the stairs for me (my exact words) for an additional fee. Originally, some builders working in our house were going to carry it up the stairs but given the later delivery slot, they would no longer be around. Luckily, I received a quick answer and was told that it wouldn’t be a problem. 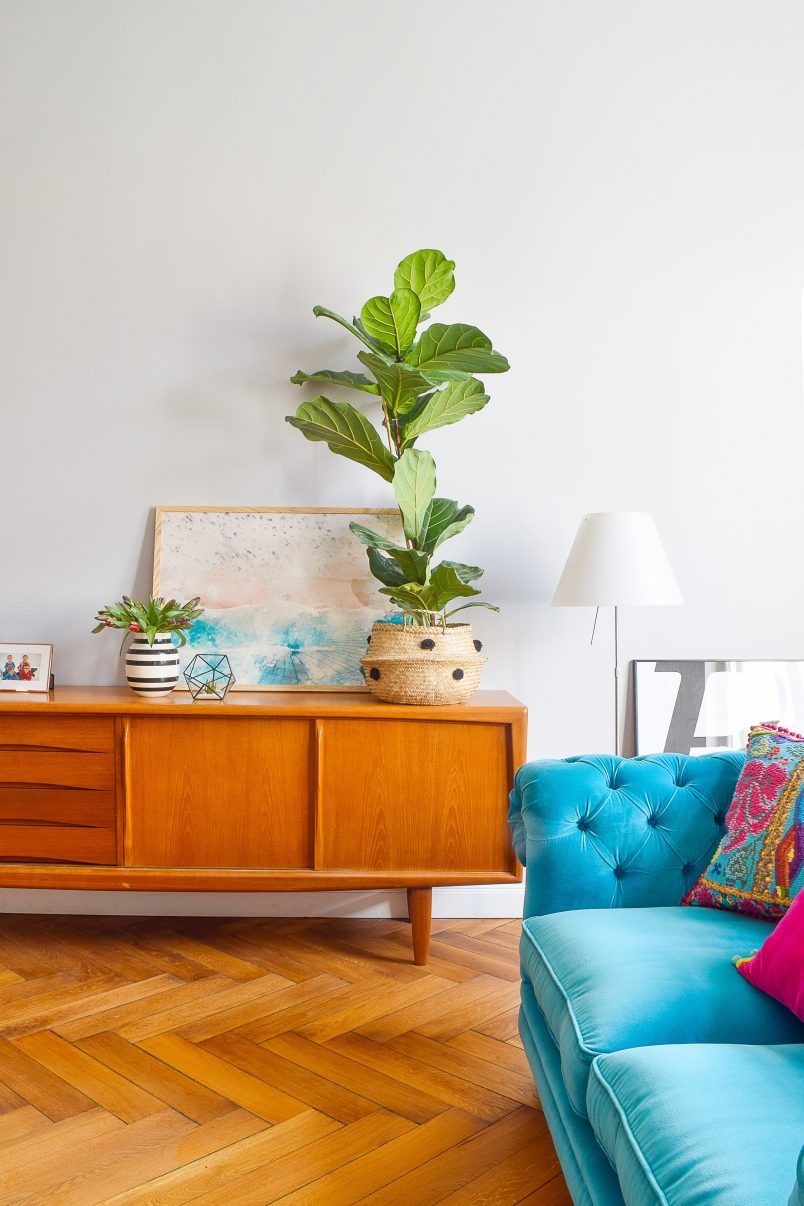 In the end, the sideboard didn’t get delivered until about 10.30 p.m. and all I can say is that standing on a street corner for over an hour at night (he’d called again to ask if I could wait outside) isn’t exactly an experience I’m eager to repeat. 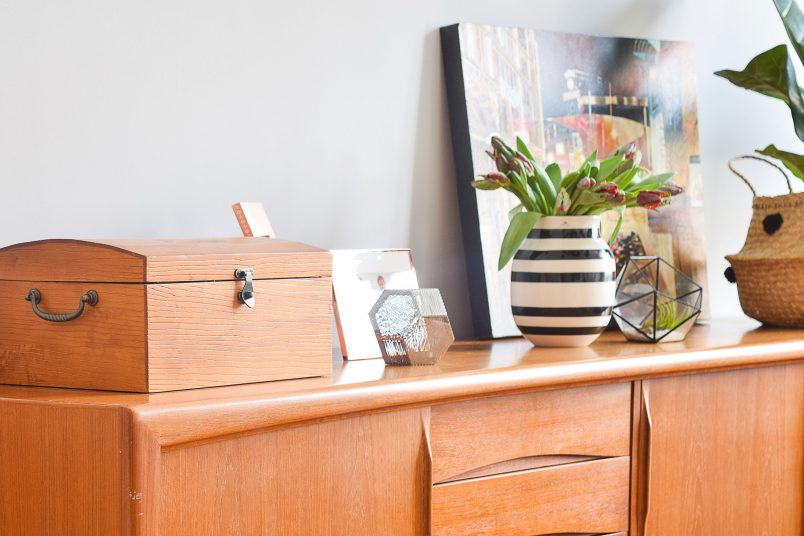 Worst of all, the driver turned up on his own!

There had obviously been a bit of a miscommunication. I understood that I’d get the sideboard carried up the stairs for me and the driver assumed he’d just help me.

Needless to say, there was absolutely no way I would be able to carry a huge 2.4m long teak sideboard up 89 steps (Jan was working away so couldn’t help)!

After a few panicky minutes, which included me asking two guys at the kebab shop around the corner if they could help (I’m pretty sure they thought I’d lost my marbles), I was lucky and a neighbour agreed to help the delivery guy drag our new sideboard up to our apartment. It was a struggle and I really appreciate that both guys carried the super heavy sideboard for me!

As stressful as everything had been up to that point, it only got worse from there. 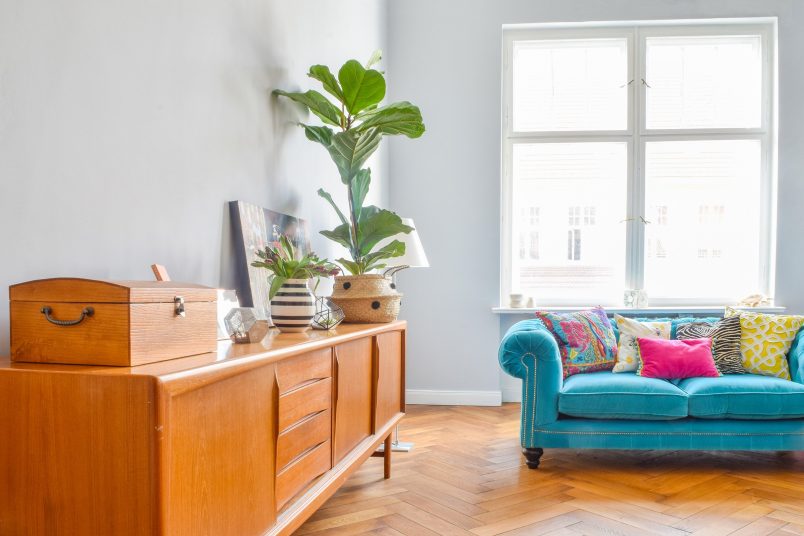 After the sideboard made it up the stairs, the driver wanted to be paid the delivery fee in cash (I’d only paid a deposit when booking).  I hadn’t realised that he needed to be paid on delivery so was lucky to have enough money to pay what I owed.

That’s when the courrier started to become quite aggressive. He wanted Pounds not Euros which, given that we now live in Germany, I obviously didn’t have. He reluctantly agreed to Euros (which I rounded up generously to cover any exchange rate issues) but then refused to accept them because there was a tear in one of the notes.

My parents happened to be visiting at the time, so we managed to scrape together another 100 Euros of tear-free notes and the driver was finally off – which is when I realised that I hadn’t been given a receipt for the money I’d just paid! 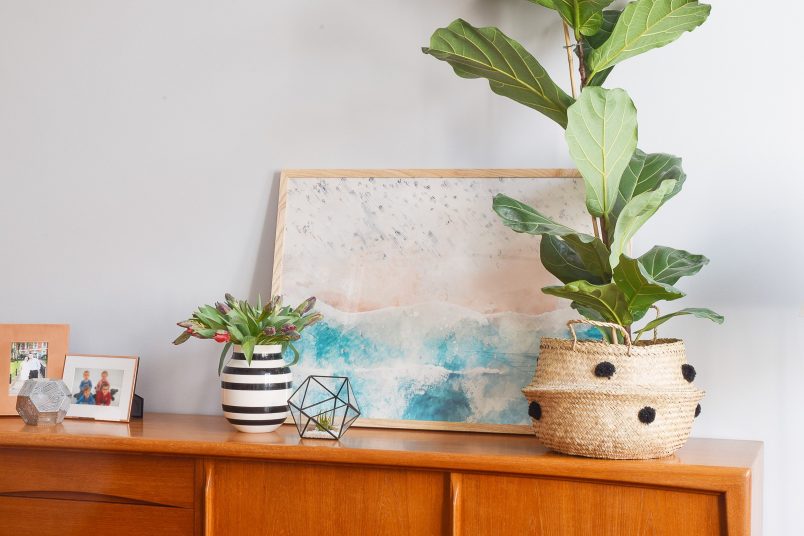 At this point, it was gone 11 p.m and I was thoroughly fed up and all I wanted was my receipt off the driver and for the whole thing to be over so I ran down the stairs in an attempt to catch up with the courier.

That’s when the really stressful part of the whole delivery saga really started. The driver started shouting at me in the middle of the street accusing me of being a cheat and a fraud.

Seriously, it was awful.

And then, to top it all off, I got threatened that I’d get sued if I left a bad review and got screamed at that the amount I’d paid for delivery wasn’t worth all of the effort. Apparently, he’d also had to carry the sideboard into the van on his own in the UK as no one was there to help him (although I’d agreed otherwise with the eBay seller) and it was just stood outside in the rain. 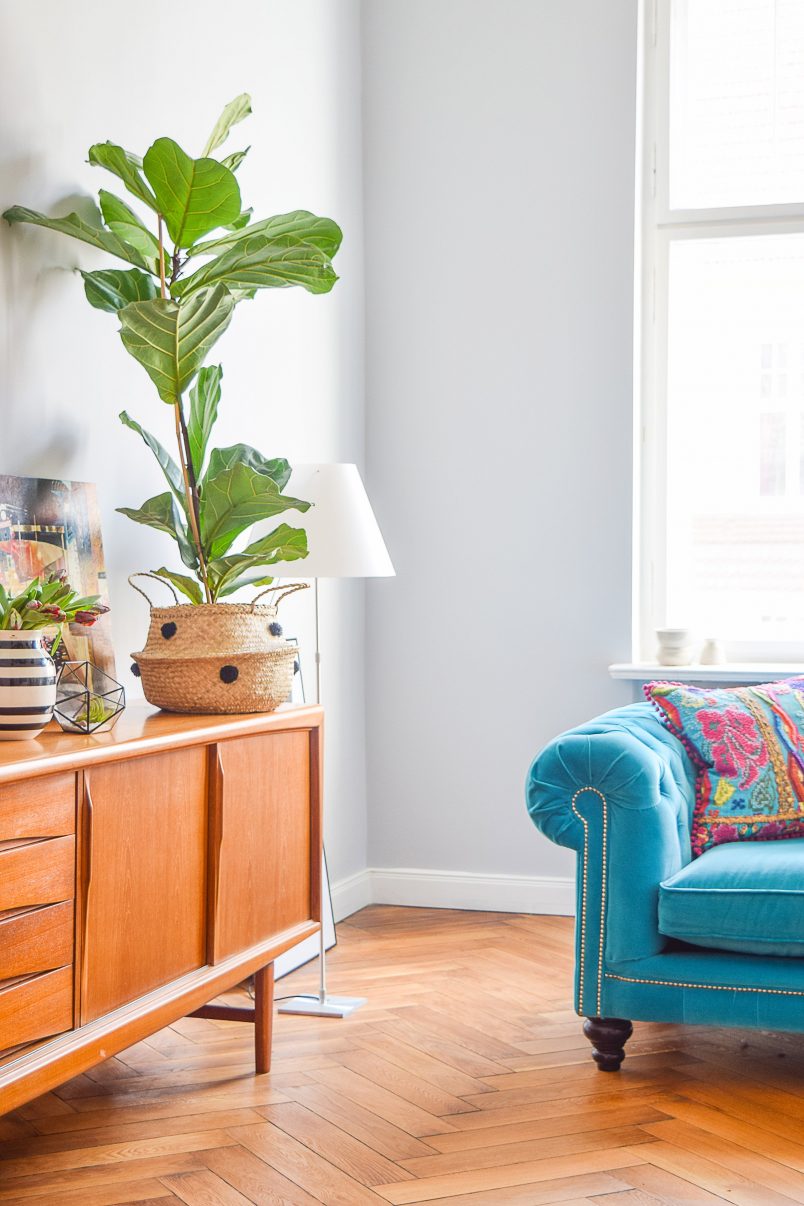 In the end, I got my receipt, the sideboard was in our apartment and, other than a few irritated neighbours, no one got hurt.

Our new sideboard, on the other hand, didn’t get off quite as lightly. The eBay description said that it was in perfect condition (other than a watermark). It isn’t. There are dents, scuffs and scratches everywhere. I hope that I’ll be able to restore it (watch this space) but it’s really not what I’d expected and I obviously have no way of telling if the damage is because of the way it was transported (it was unprotected and upside down in the back of a van when it arrived) or if the seller misled me. 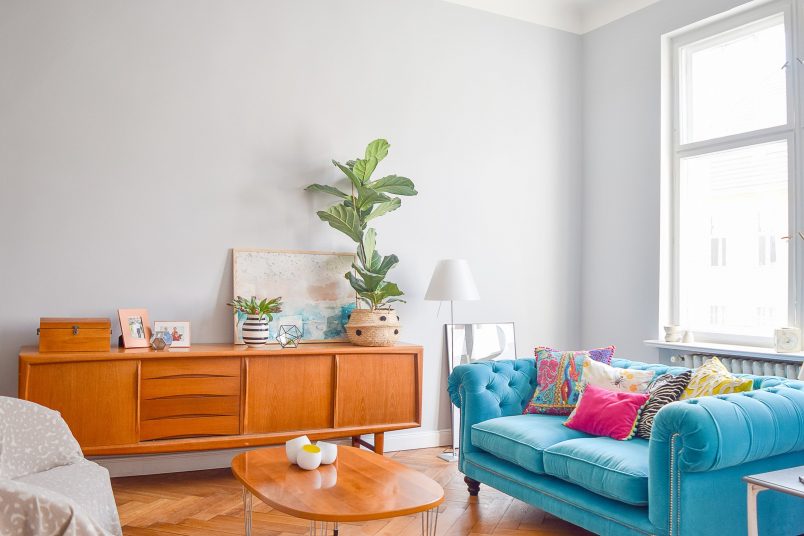 In case you’re wondering, I didn’t leave a review for the eBay seller or for the Shiply driver. Needless to say, the whole experience had intimidated me so much that I would never use Shiply again. Is it unfair towards all Shiply couriers? Probably. But after my personal experience, I’m just too scared to use Shiply and eBay again – at least for a long while!

Have you ever used a courier to deliver something you’ve bought of eBay (or another auction site)? Do you have any tips on where to find great used furniture?

PS. You can read about how we restored our sideboard and managed to completely get rid of the ugly watermark here!