After years of searching we’ve done it. We have finally found a lamp that we both like for our living room ceiling! I know, I couldn’t believe it either – something we actually agree on!

We are lucky to have high ceilings throughout the house so that we have enough height to be able to install a large pendant. Maybe because of this, we have been struggling to find something chandelier like to compliment the style of the house, but also to fit with our more modern taste and take on things.

This is was the pendant light fitting in our living room when we moved in. 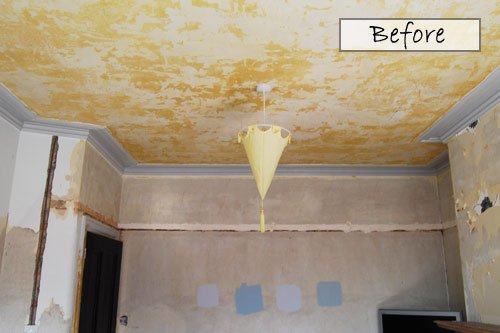 When the light was on, you could see a few centimetres of dirt that had collected in the tip of the material shade. It was so disgusting!

Amongst what seems like about a million other things, we refitted the missing ceiling rose. We used no nails to glue it in place, but it took quite a long time to dry, so we had to hold it in place for about half an hour. 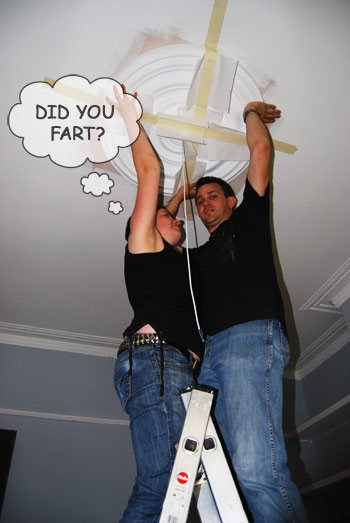 After completing most of the building and decorating work, this is what the room looked like for the past year. You can see that we still need to restore the door and our shelves are still rather bare, but in general we are getting there. 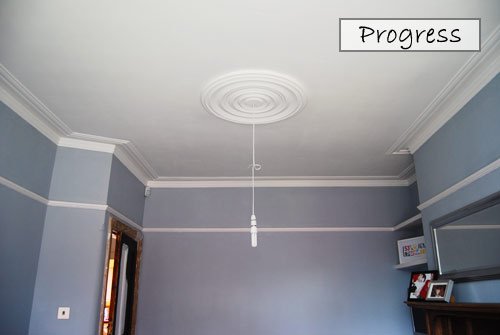 If there is one thing that makes the room feel unfinished it is the bare bulb hanging from the ceiling. So finally, after a spontaneous stop at a Dwell we came across this Coffee Bean Pendant Lamp. This is what it looked like when we got it home. 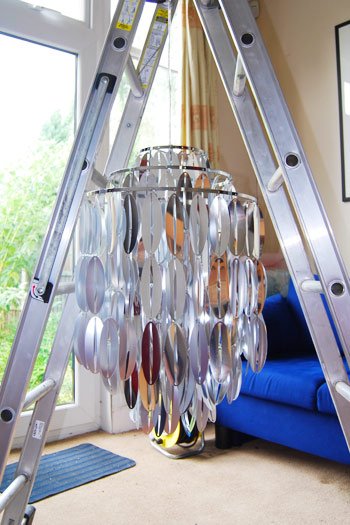 If you are wondering why it is hung around on our ladder, it’s because attaching the light was a little more complicated than we expected.

When restoring our bedroom, we installed a new pendant fitting in the living room below, so that we wouldn’t have to access beneath the newly sanded and varnished floorboards again. The ceiling rose of the pendant fitting containing the electrical cables, is hidden within the space between the ceiling and bedroom floor so that only our traditional ceiling rose with a cable coming through the centre is visible in the living room.

We had always assumed we would just buy a shade, but as we bought a lamp, we need to take it to pieces in order to attach the cable that we have already laid through to the floor and ceiling to the new lamp.

After about 2 hours of messing, fiddling, trying to remove a floorboard and lots of swearing we managed to take the lamp to pieces and fit it to our existing cable. And, after putting up with a bare bulb dangling over our heads for the past two years, this is what it looks like now. 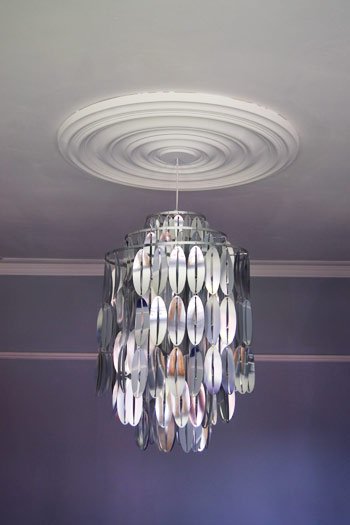 The longest dangly bits still hang fairly low, so if anyone that is ridiculously tall (if you ask me, that’s classed as anything over 1,60m) their head will just miss the underside of them, but as they are light and soft, it shouldn’t really shouldnt be too much of an issue. We love the way it dangles and reflects the light – like a proper chandelier would, but in a more contemporary way. When the windows are open, the pendants sway slightly in the wind. 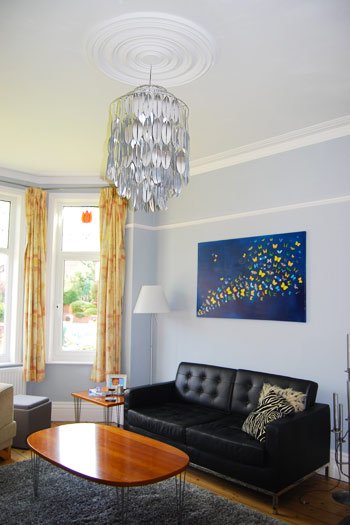 While we were both balancing on the ladder attaching the lamp, something must have come loose in the connection, so that the light doesn’t actually work yet. Ups. As soon as we have managed to get the light to work, we will let you know what it looks like!