I’m so, so, so excited about the projects we have lined up for this year. You probably know that we’re not ones for keeping secrets and there are going to be some big changes around here!

We have so many projects planned that my head is already spinning with ideas and excitement and I can’t wait to get stuck in!

The biggest project on our to-do list is sorting our bathroom situation. 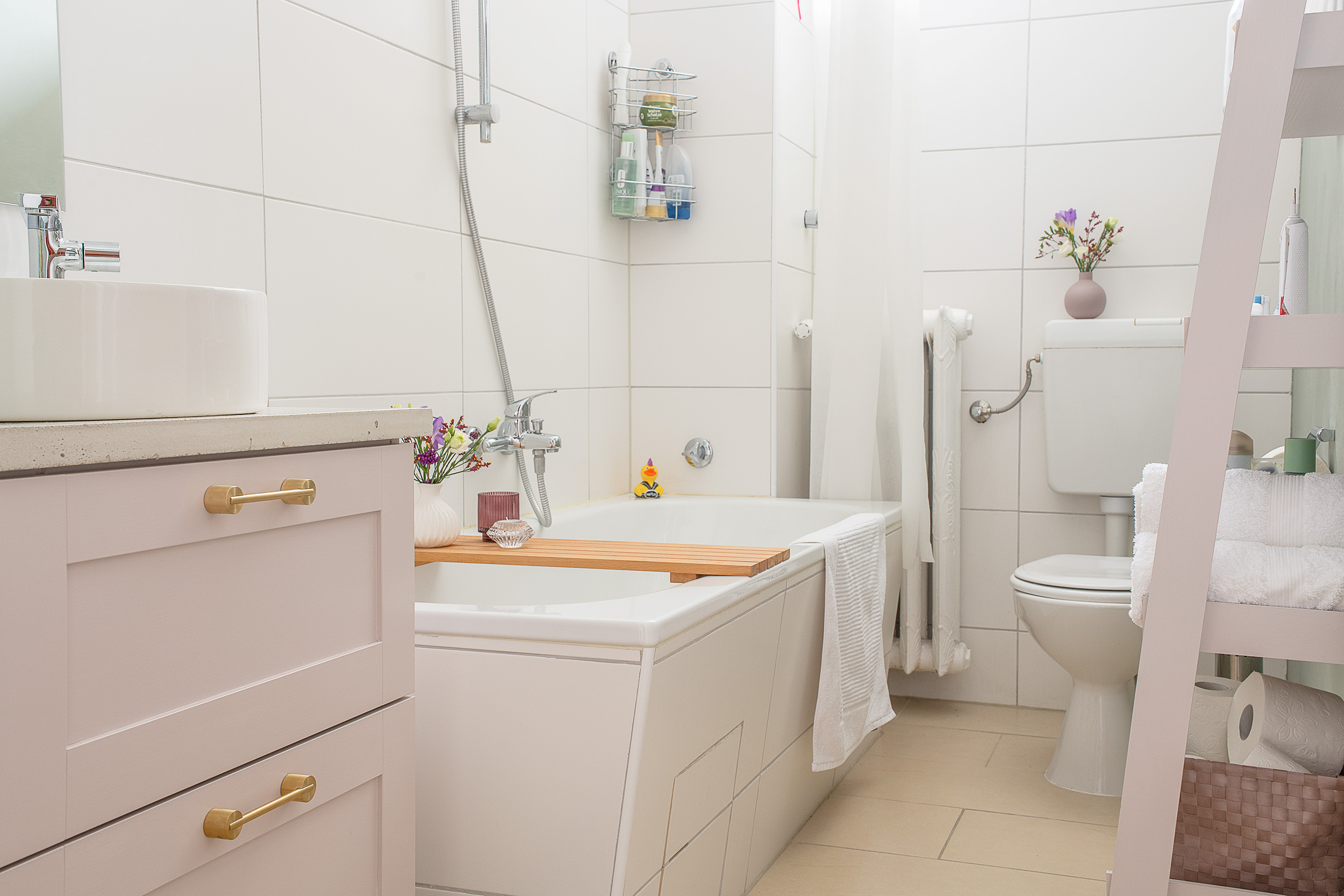 Now, I’m sure you’re all confused as you’re thinking we only just gave our bathroom a makeover and you’d be right! But, we’re talking about our second bathroom, you know the one that doesn’t actually exist yet!

Yep, we’ll be adding a second bathroom to our apartment! 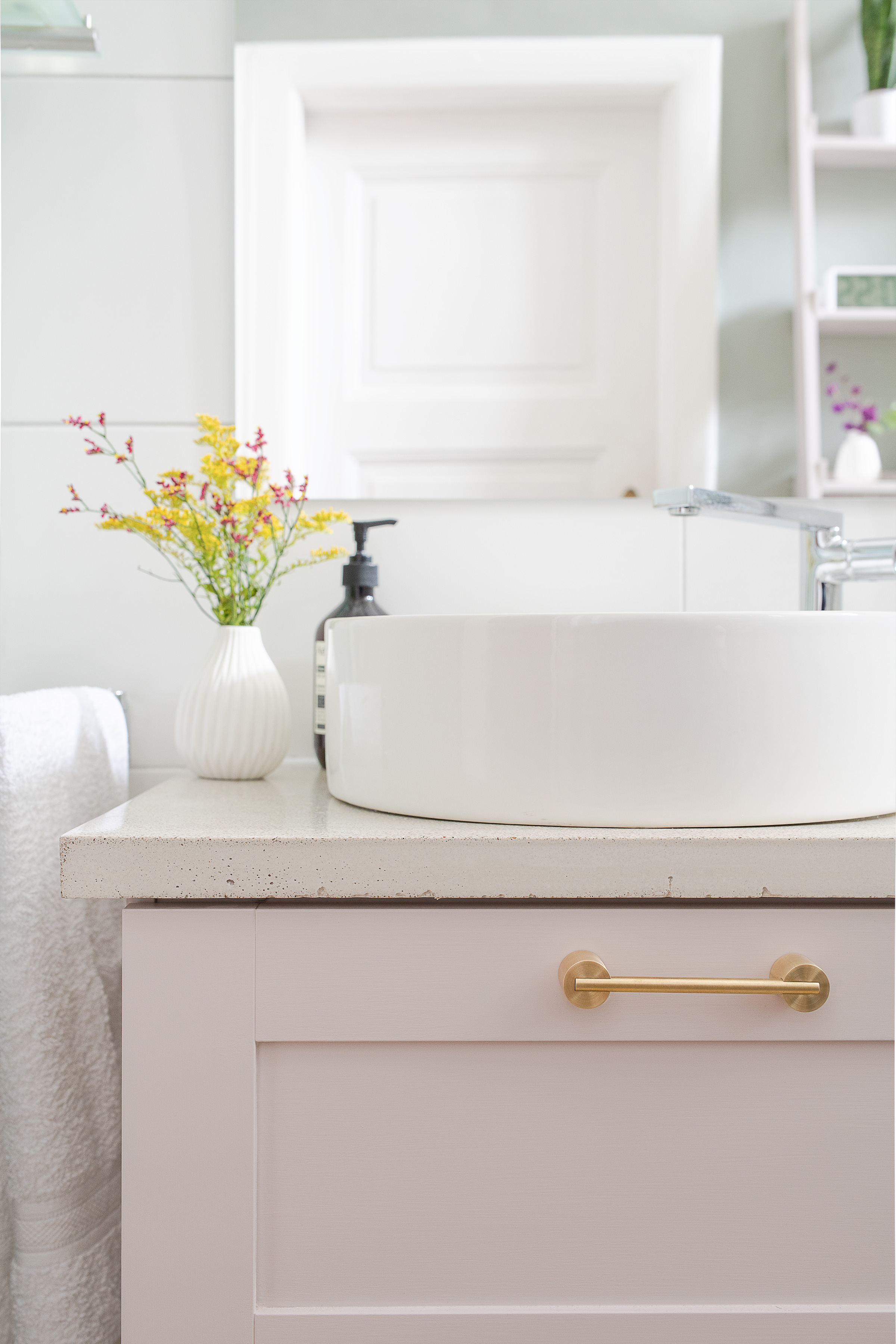 I’ve been trying to work out a solution to our bathroom or rather lack of bathroom issue ever since we moved in and I’ve finally come up with a solution that I think could give us the en-suite I’ve been dreaming of!

I’m ridiculously excited about our bathroom renovation plans but there’s a problem. I’m not sure if I’m a genius or if I’ve lost my mind which is why I’m sharing our plans here so that you can help me decide!

But, let’s start at the beginning…. 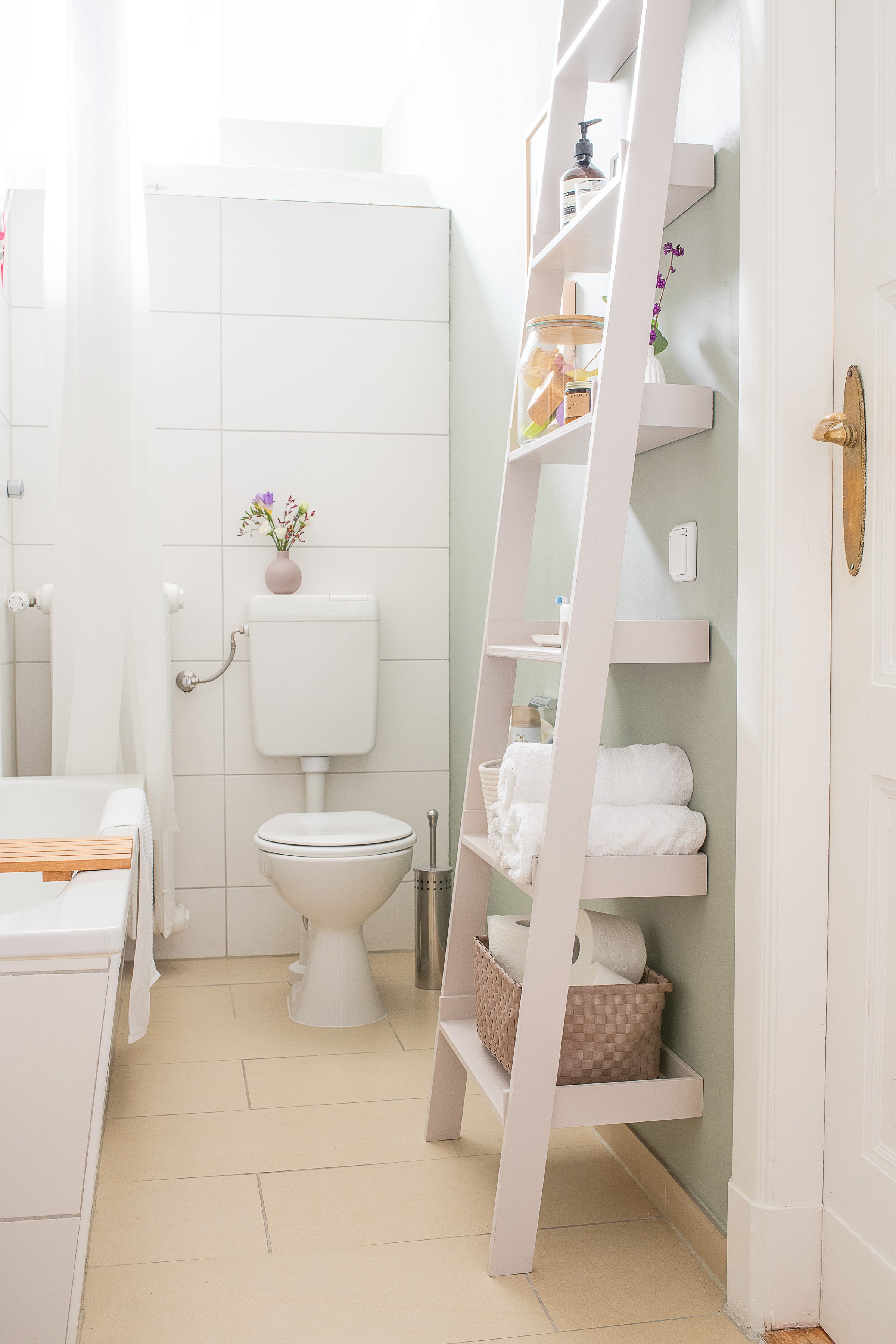 Just after purchasing our home we shared some of the layout changes we’re considering which include moving the bathroom to the current kitchen (and moving the kitchen to the study), slightly enlarging the bathroom by knocking down the wall to the pantry or keeping it the same as it is and just updating it. After a lot of back and forth, I’ve finally come up with a solution that I think would give us everything we want.

So, what are the bathroom renovation plans?

We’ve decided to keep the bathroom where it is and not knock down the wall between it and the pantry. Yes, I know that sounds like we’re not going to make any changes but bear with me.

Instead of creating one slightly larger bathroom by knocking the two rooms together, we’re going to close off the existing door between our bedroom and bathroom and turn the pantry into a second bathroom by switching the position of the door from the kitchen side to the opposite bedroom side!

Obviously, the room would be way too small for a full bathroom which is why we’d only put a toilet and washbasin in there. This is where our plans start to get a bit more adventurous. Given the lack of space, we would then install a shower in our bedroom.

Yep, you heard right – we’d have a shower in our bedroom! 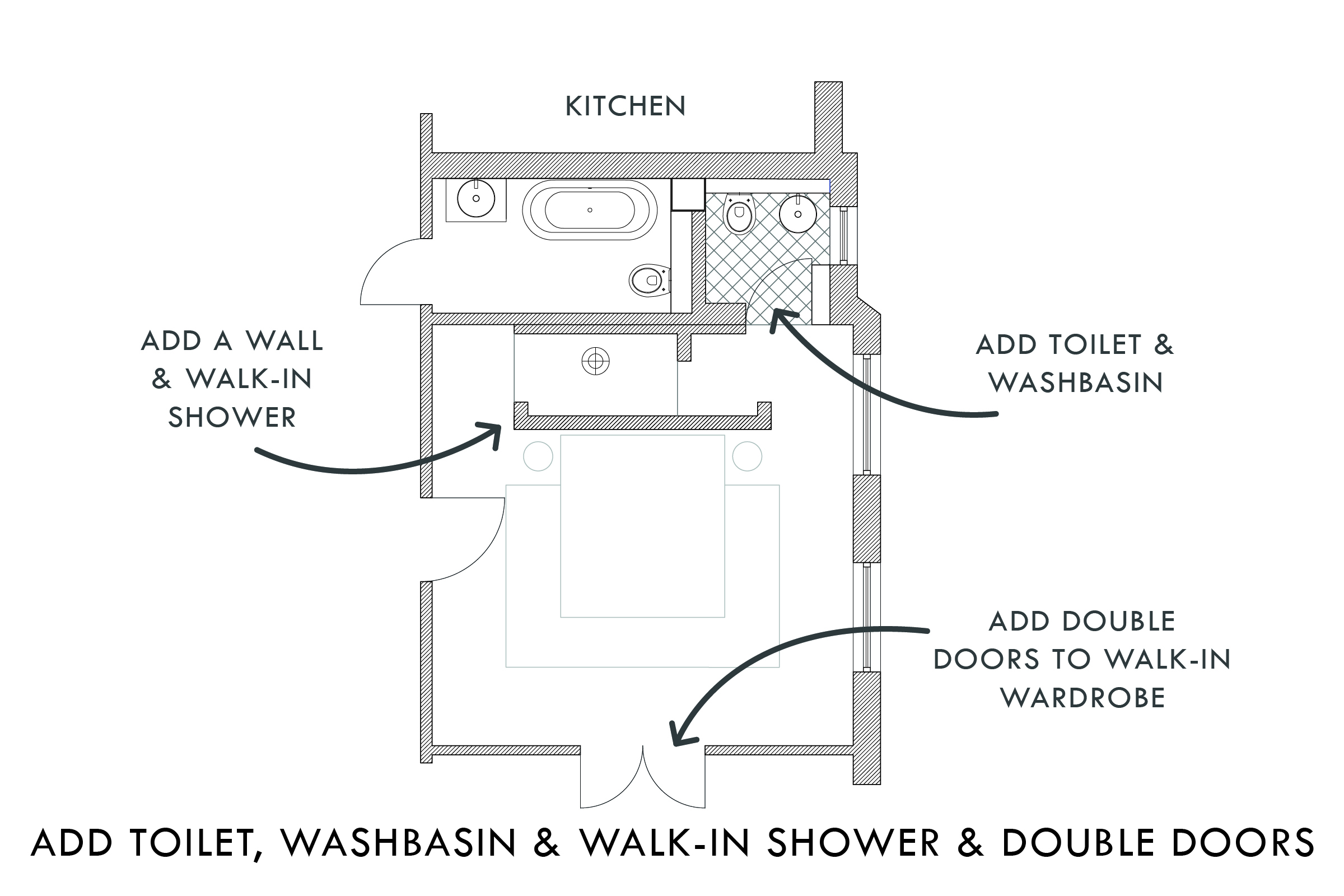 We would build a wall that’s roughly where the top end of our bed is now and then install a shower behind it. Because of our intricate plaster ceiling, the wall obviously won’t go all the way up to the top but it’ll be large enough to completely hide the shower behind it. On the other side of the wall, we’ll have space to place the bed. 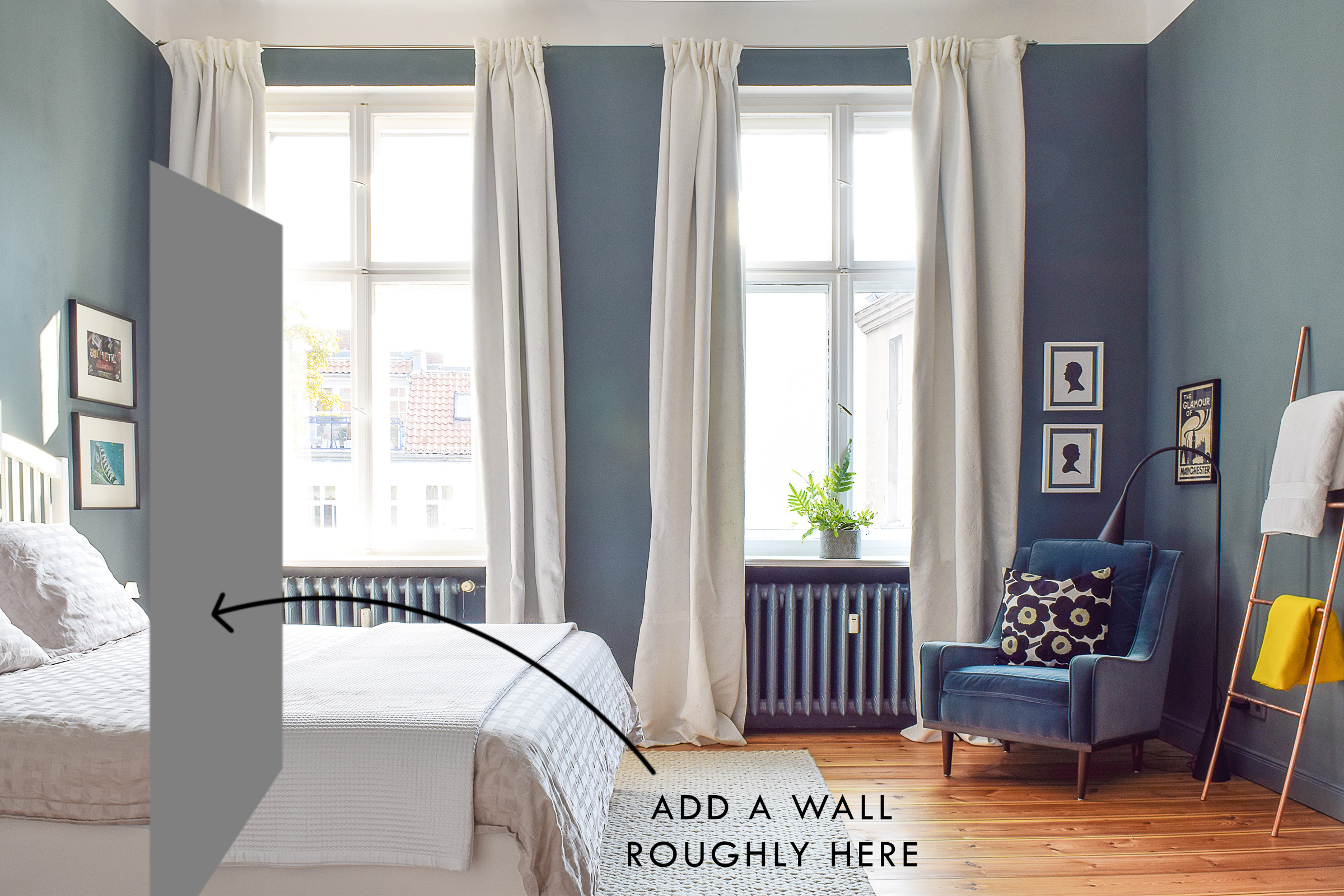 This means that we can keep our existing bathroom pretty much as it is and have our own much more private and personal space. I’m also really excited about this solution as I hate showering over the bath and this option will give us the walk-in shower that’s at the top of my wish list! 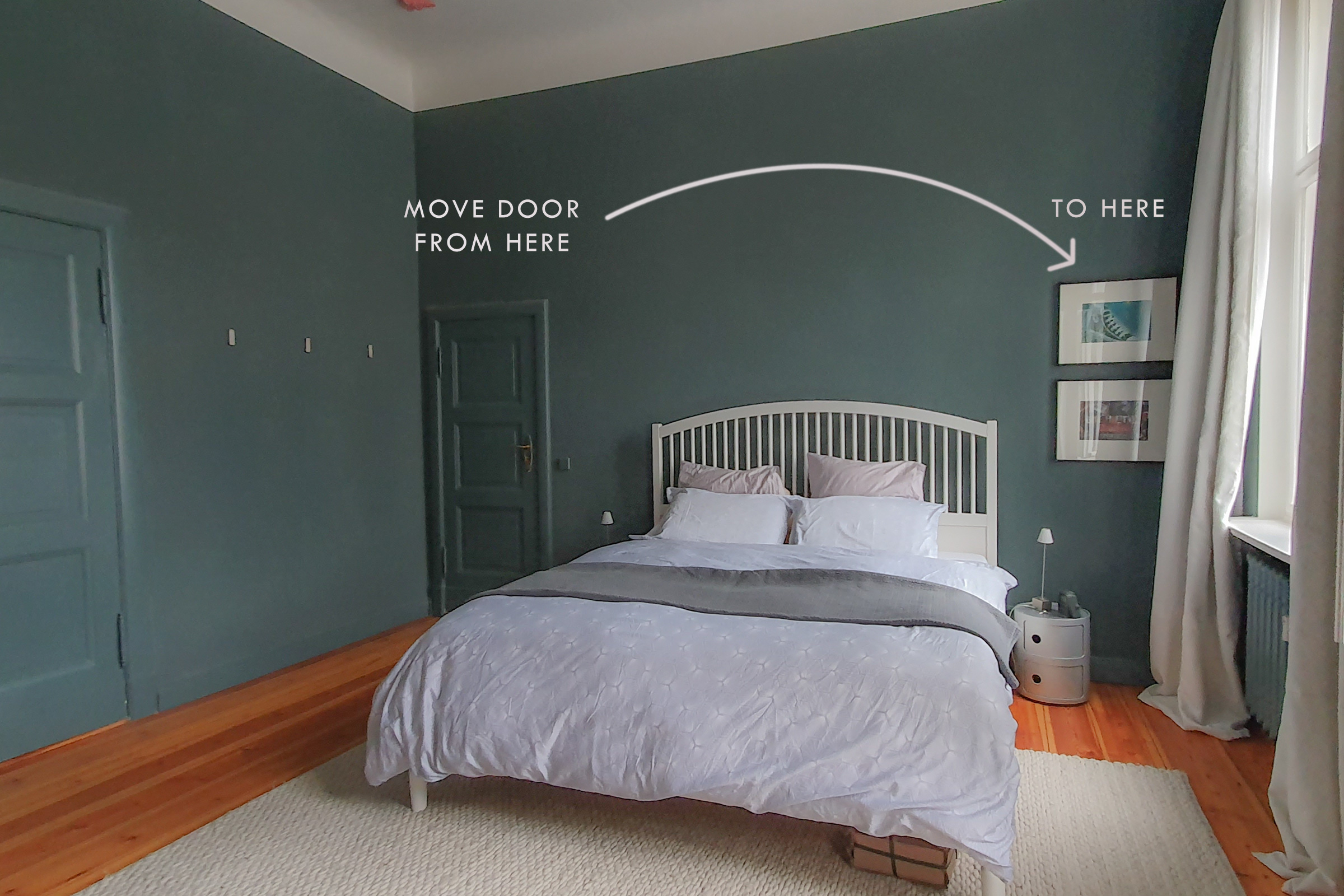 I know that it can be hard to imagine exactly what I mean based on the drawings but try to think of it as a kind of luxury hotel room with a semi-integrated bathroom a bit like this image I found on Pinterest but with a solid wall instead of the glass partition.

As much as I love open-plan interiors, there is a limit and there are certain rooms that do require doors which is why I’ve kept the WC in a completely separate room (which used to be our pantry). 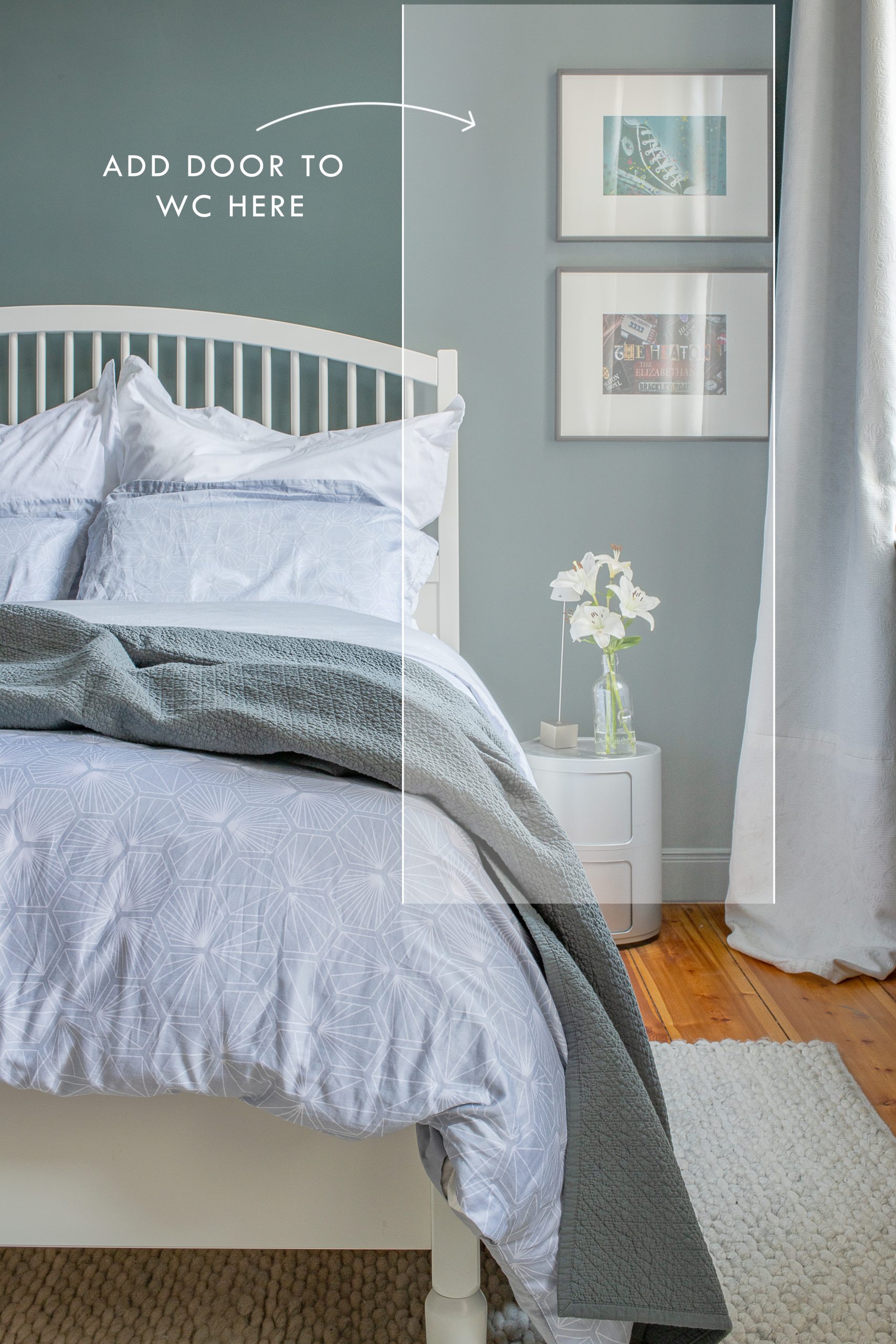 The riskier and possibly slightly mad bit of this design is the shower into our bedroom. We really don’t have any space to install one anywhere else and I think that this design gives us the best of both worlds – a bathroom for guests and an en-suite.

I personally think that the design of our bathroom and bedroom are going to be a vital part of making this work without it looking weird. We’ve seen similar integrated bedroom and bathroom concepts in lots of hotels we’ve stayed in but making it work in a normal home is going to be a challenge. The space definitely has to be special and luxurious to make up for the fact that it’s part of the bedroom. 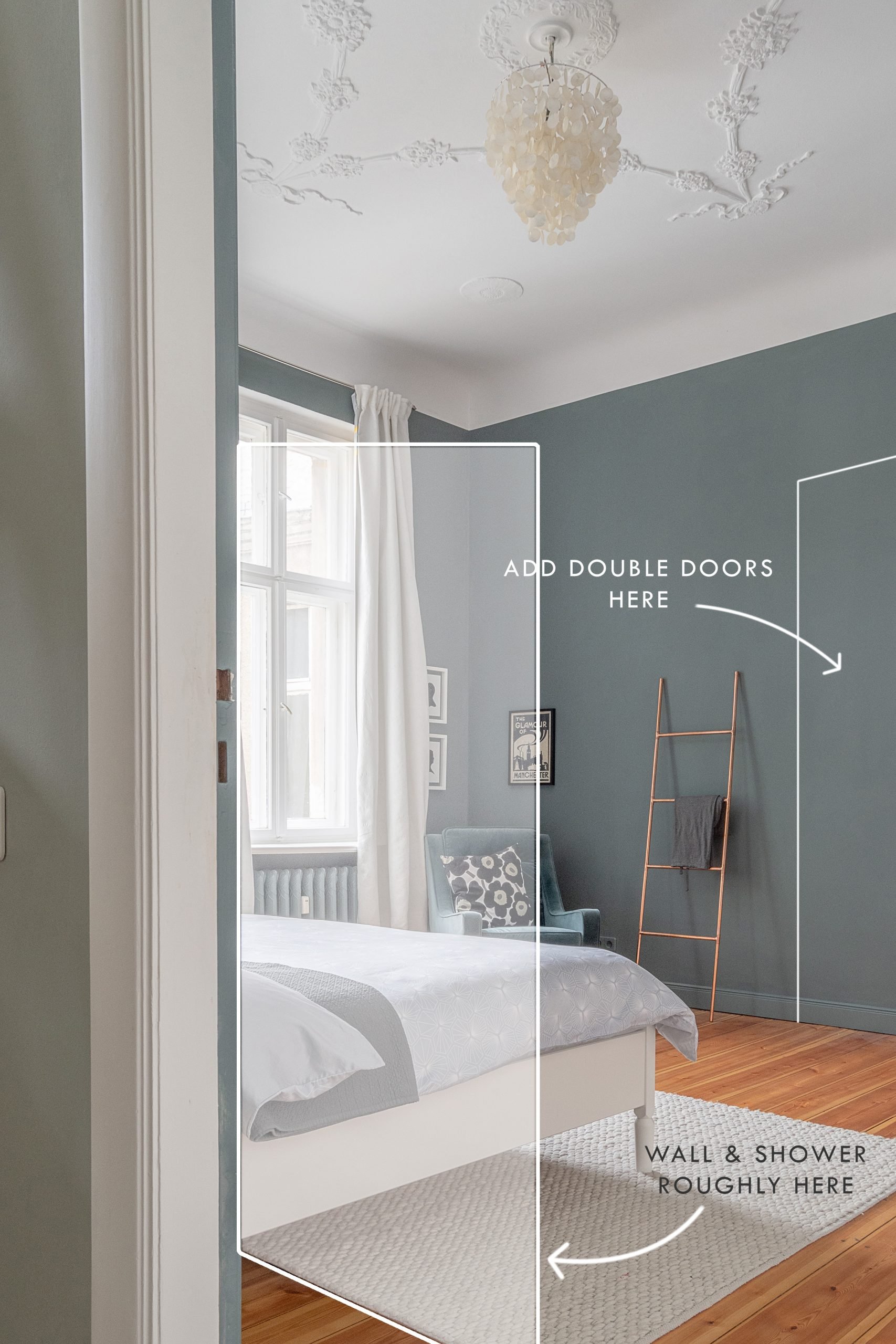 We also know that we won’t be staying in this apartment forever, so something that is playing heavily on my mind is if people will find this too weird. Which is why we’re asking you lovely guys for your opinions!

Is our bathroom renovation design completely bonkers? Would you find having a shower that’s integrated in your bedroom weird? We’d really love to hear your thoughts on our design, so please take part in our survey and leave us a comment!

As you’ve probably guessed, this is not going to be a completely straightforward, easy or cheap project to complete either. There are pipes to lay, walls to knock down & rebuild, windows to replace, doors to be moved and floors to upgraded.

To keep costs down, we’ll be doing as much of the bathroom renovation work as possible ourselves but even then this is a total budget blowing project but as the pipework in our building is being replaced this year, it’s now or never!

So what do you think? Are we mad to even consider integrating a shower into our bedroom?